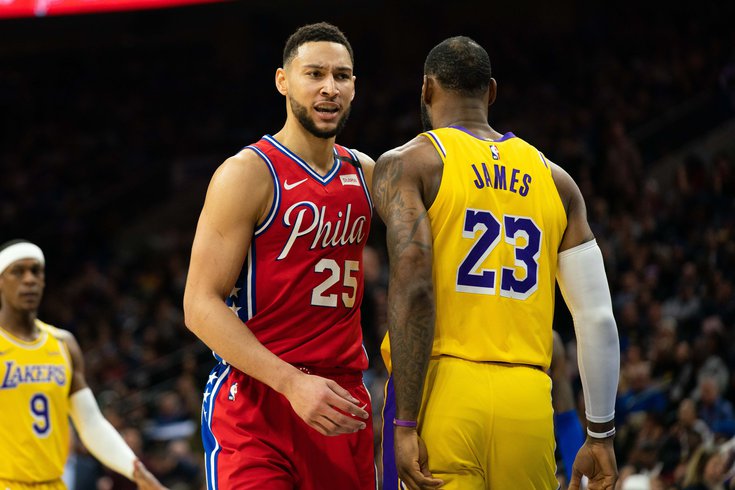 Staring down months of no basketball, Michael Jordan vs. LeBron James arguments, a dreadful Eagles season, and a prolonged front office search that may turn up nothing, things are looking bleak in Philadelphia. The Sixers identified their next coach and found a very good one, but the fundamental problems with the organization and the roster on the floor remain.

Despite what the headline might suggest, the Sixers are not winning a title playing like or mimicking the 2019-20 Lakers. He may have a Klutch protege in place, but LeBron James is not walking through that door. Joel Embiid may own Anthony Davis in their one-on-one history, but he is not equipped with the defensive versatility to spend chunks of games guarding Jimmy Butler, as Davis did en route to the Lakers' six-game triumph over Miami. Philadelphia is not skilled enough or athletic enough to be these Lakers.

No, the lessons the Lakers provide for the Sixers are a bit different. The fit with Al Horford isn't getting better, and the fit concerns loom no matter what offense the coach runs. But if you aren't looking at successful teams and seeing what you can derive from them, you might as well get out of the race entirely.

The regular season matters, just not in the way you think

With ratings for all sports plummeting and the words "load management" creeping into everyday lexicon, there has been a lot of ink spilled about the uselessness of the regular season. In some ways, this was a byproduct of the Warriors adding Kevin Durant to an already loaded team — when the title-winner feels inevitable, why would fans invest energy in the product?

There's another layer to this, of course. The idea of "flipping the switch" has become a popular excuse for teams underperforming in the regular season, the implication being that their final gear will only appear during a deep playoff run. Evidence of that practice came to Philadelphia as recently as last season when they morphed into a different sort of team in the playoffs and Jimmy Butler took control of the offense.

But the Lakers, and to a lesser extent the Heat, are proof of the opposite being true. After dropping their opening night game to the Los Angeles Clippers, the Lakers would go 24-2 over their next 26 games, not stringing together consecutive losses until mid-December. This was a team for whom the regular season mattered, and when push came to shove in the playoffs, it showed.

For teams who have climbed the mountain together and stars who have won titles together, a more relaxed approach to the regular season makes some sense. You can't win or lose a title during a January game in Charlotte. But the best teams/programs take those games and use them as lessons at the very least, steps in part of a larger journey even if the games themselves are throwaways.

The Lakers had an identity, and it wasn't just, "We're going to be big." They were a defensive-minded group all season, using their bigs to shut off the paint and necessitating buy-ins from their guards and wings to make every rotation swift and smart. They started big men next to Davis most of the year, but they spent an abundance of time in lineups with Davis as the lone big/nominal center, helping both Davis and the role players around him to prepare for a playoff run where they'd need a mix of both looks to win.

As LeBron James made clear in his celebratory interview Sunday night, being available and accountable night after night mattered for this group. That was missing for Philadelphia last season for various reasons, but it starts with the two top players holding themselves and everyone around them to the highest possible standard. Really, it starts with Embiid — Simmons continues to have major flaws that limit his aspirations, but his leap forward and commitment on defense were undeniable.

The Heat actually did the Sixers a favor by showing them a direct example of this phenomenon. A mid-December loss to the Heat was plagued by struggles against Miami's zone defense, something that was billed at the time as a Sixers-specific problem, amplified by their inability to solve Dallas' zone in a loss later that same week.

My own distaste for zone defense aside, time has shown us what that night was really about: a well-drilled team executing a different concept to disrupt their opponent. The Heat have been one of the league's most prolific zone teams under Erik Spoelstra, and their practice/execution of the zone in the regular season made it a dangerous part of their arsenal for the playoffs. Teams with far fewer shooting woes and better roster balance than the Sixers struggled with it all the same.

The Sixers have not accomplished enough or even shown a single cohesive identity long enough to believe they can leap to contention any other way. Without hard work and experimentation all of next season, they will end up right back where they were in these playoffs, undermanned and out of ideas. The Sixers don't need to have the No. 1 seed, but they need to have the commitment of a team interested in fighting for that seed.

Star in your role > having more "stars"

Coming off their defeat at the hands of the Raptors, the Sixers looked at the on/off splits for Embiid and decided they needed to do something drastic. In stepped Al Horford,  a $100+ million solution to a mid-level exception problem. It was, as all of you know by now, a complete disaster. The Sixers undercut Embiid's ability to be great with a doomed starting lineup, and they didn't do much with Horford filling in for Embiid either.

Same story with the Tobias Harris situation. Coming off a career-best stretch in Los Angeles, the Sixers paid a premium to acquire him, shrunk his role, took him out of the sets he likes, then overpaid him to play within the box that didn't work for him the previous season. It was, as all of you know by now, a complete disaster, with Harris' contract now ranking near the top of the worst deals in the league.

The Lakers, meanwhile, were maligned for everything they did outside of the Anthony Davis deal that Klutch Sports basically orchestrated themselves. They sold out for Kawhi Leonard and failed, leaving them to overpay Danny Green and rely on a handful of name-brand guys past their prime (Dwight Howard, for example) to provide a deep enough bench to put them over the top.

I say this without a trace of irony — the Sixers would have been better off with a supporting cast of Alex Caruso types than what they had in place last season.

Caruso became something of a meme last season, with the All-Star votes obviously preposterous, but he played the role he had to perfection. If an open three came to him, he took it. If an opportunity for an offensive rebound appeared, he went for it. When it was time to play defense, he dug in and made plays, either by stopping them from happening with positioning or disrupting them with a well-timed swipe. He embraced a role that was his and his alone, rarely trying to be more than what he is and was asked to be.

This is a two-front problem. The front office has to make it a point to acquire players who are able and willing to slide into natural roles, but Simmons and Embiid have to perform at a level that makes that buy-in easy.

The first problem seems easy enough to address, or at least not compound. If you are building around a post-up center and a 6'10" hybrid who needs to use the paint, don't invest the GDP of a small country in two more players who want to play out of the high and mid-post. Chase the Khem Birch types of the world to play backup center and go get yourself a guard who sets the table for you, instead of relying on a two-guard masquerading at the point who makes decisions like he ate two Pixy Stix before every game.

The harder part is Simmons and Embiid playing at a level that makes people want to follow them. Neither is the natural-born, command-the-room leader you would ideally want at the helm of the franchise. In good times and in bad, the responsibility often fell to Tobias Harris to be the loudest voice in the room last season, even during times where players had issues with Simmons and Embiid specifically. That's a formula that can only work if Simmons and Embiid are so breathtakingly good and competitive on the court that they don't need to say or do much away from it. That wasn't the case last year.

Doc Rivers cannot solve this problem by himself, as his track record of managing egos over the last seven years will tell you. It's up to the two supposed leaders to compel the rest of this team to fall in line behind them, and for the beleaguered front office to surround them with players who might actually fit into a basketball team instead of a disgusting science experiment.