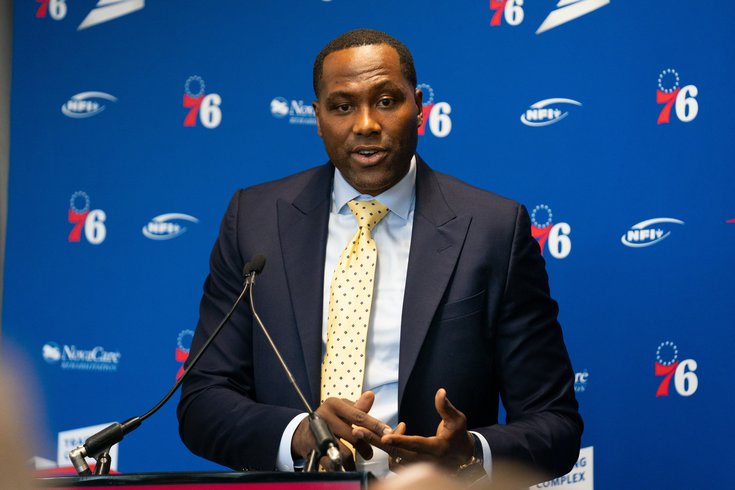 The Sixers are expected to hire Pacers Senior VP of Basketball Operations Peter Dinwiddie and Magic Director of Scouting Prosper Karangwa, a team source confirmed on Friday afternoon. Keith Pompey of the Philadelphia Inquirer was the first to report the news.

Dinwiddie is expected to take the title of Executive VP of Basketball Ops., as first reported by Shams Charania of The Athletic. That's an important distinction — it's the title previously held by executive Alex Rucker, who has come under fire this offseason (publicly and privately) for his role in the team's collaborative decision-making over the last couple of years.

EVP, Basketball Ops is the title immediately below General Manager Elton Brand in the Sixers' staff directory, with a team source confirming Dinwiddie will be Brand's No. 2 in the front office. Karangwa is expected to take the title of VP of Player Personnel.

These moves represent the first major shake-up to a front office that has been under evaluation from the moment the season ended, with heavy speculation about who might go and where they might end up.

As of Friday night, a Sixers team source told PhillyVoice that Rucker would be "reassigned" within the organization without specifying a title or role. Ned Cohen, who served under Elton Brand with the title of Assistant General Manager under the previous structure, will continue with the organization in the same role moving forward, per the source.

Dinwiddie is the more known quantity of the two men, and the Sixers luring him away from the Pacers front office is a bit of a surprise given his ties to the organization, though a bump to No. 2 is significant. A native of Indianapolis, Dinwiddie began working for the Pacers in the mid-2000s after briefly leaving the state for law school, and his path to an NBA executive role started in, of all places, the ticket sales department for Indiana.

But thanks to a tip from a co-worker to longtime Pacers exec Donnie Walsh, Dinwiddie got a chance to impress the head honcho. As detailed in a story by Scott Agness for The Athletic, Dinwiddie quickly rose through the ranks of Indiana's front office, praised by none other than Larry Bird:

“There was a little bit of conflict there because they didn’t want to lose him on the ticket side because he was doing such a great job,” Bird joked via phone from his Naples, Fla., residence. “We finally got him in there and just over time, he was involved in everything.

“He was in every meeting; he talked to the league on a weekly basis; he did trade calls; he talked to agents; he did most of the contracts at the time and now he’s probably doing them all. To see his growth over the years has been pretty impressive.” [The Athletic]

From the outside, Dinwiddie was often viewed as the "cap guy" for Indiana, the person who knows the ins and outs of the CBA and uses that knowledge to help prepare the organization in the short and long-term. That role is easy to sneer at in a lot of organizations, but it's an impactful one in Indiana, where marquee free agents are likely never coming and savvy spending is more important, with the team rarely in a position to use a premium draft pick.

Bringing in a guy whose expertise comes on that front would also seem to bode poorly for Cohen, the former league office employee who often served as Philadelphia's point person on CBA/cap-related matters. But drawing that one-to-one connection would also be reductive of Dinwiddie's role in Indiana — he was credited with leading the planning for Indiana's practice facility, has spent time on the road scouting, and has had interest from multiple organizations in the past as a potential GM, including the Bucks and Grizzlies.

Karangwa is a bit more of a wild card, at least as it relates to public information. After playing college ball at Siena from 1999-2003, Karangwa spent seven years playing basketball overseas between stops in Syria, Germany, Austria, and France. In 2011, a year before taking his first NBA scouting job with the Orlando Magic, Karangwa was in the process of building a scouting service identifying American talent in the Big East, MAAC, America East, and Atlantic 10 conferences for teams in Europe.

After four years of work as a scout for the Magic focusing on the midwest (of note: the Magic selected Indiana's Victor Oladipo No. 2 overall in 2013), Karangwa was promoted to the Director of College Scouting job for the Magic in July 2016, taking an even more prominent role in Orlando's scouting department.

If we use that date as a point from which to go from with Karangwa, it's still a bit early to judge his success or failure as a big voice in the draft room. Orlando's selection of Jonathan Isaac in 2017 is about as good as their selection of Mo Bamba in 2018 is bad.

Chuma Okeke, Orlando's first-round pick last season, was a favorite among many draft analysts but was available at pick No. 16 because of a knee injury suffered late in the 2018-19 NCAA season. Karangwa was said to be one of the primary advocates for Okeke in the Magic front office, according to Magic beat writer Josh Robbins, a fact you can either use as a point in his favor or a mark against him depending on your view of him as a prospect. I was a fan and wrote as much at the time of the 2019 draft).

Without assigning too much credit or blame to Karangwa specifically, Orlando's organizational M.O. in recent years has been to go after athletes and defense-first players with the idea of molding them into something more. The Sixers have straddled both sides of that fence, with Landry Shamet and Matisse Thybulle almost complete opposites stylistically in back-to-back drafts, so it will be interesting to see if Karangwa ends up pushing them in one direction or another.

There's no word yet on the extent of departures and arrivals for Philadelphia in the front office, so stay tuned for more news as it comes in.