The Knicks are open to absorbing contracts. Can Sixers find a trade that makes sense? 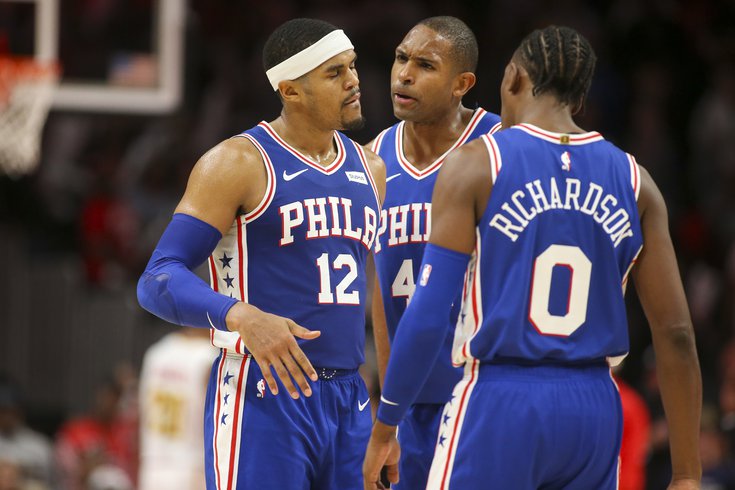 If you are at all invested in the Sixers, the various trade machines available on the internet have gotten a serious workout. We have discussed just about every possible iteration of a move to acquire Buddy Hield or Chris Paul, and every possible path to turn Al Horford and/or Tobias Harris into better-fitting parts.

Now, there has been a development on the trade market — the Knicks are reportedly open to absorbing contracts this offseason, according to a report from Ian Begley of SNY.

Here's how Begley tells the story:

A note on the offseason: several teams said the Knicks are open to using their cap space to take on undesirable contracts via trade, SNY has learned.

The Knicks would presumably acquire another draft pick and young player in this kind of trade. New York has the No. 8, No. 27 and No. 38 picks in the draft.

The idea of taking a bad contract into cap space could be one of several avenues the Knicks are considering this offseason. Depending on what they decide to do with the contract options for Bobby Portis, Wayne Ellington, Taj Gibson and Reggie Bullock, New York could have more than $60 million in cap room in the offseason.

The Knicks, who told teams recently they’d be open to taking on a bad contract, have not made decisions on any players with options yet.  [SNY]

It's a pivot from the Knicks, who have pushed stubbornly through short-term move after short-term move for decades, rarely trying to take advantage of desperate teams with a long-term approach. It's an opportunity to the Sixers, though one I think may have limited value to them when it's all said and done.

The Knicks roster is, well, not exactly brimming with talent. Not that it really matters in this context — New York is not looking to swap parts, only to pick up useful assets as they navigate through a rebuilding period. Their role this offseason is to serve as the NBA equivalent of a Get Out Of Jail Free card, undoing your previous mistakes.

The contracts for Horford and Harris certainly qualify under the "previous mistakes" category. The Knicks are ostensibly offering a path to shedding at least one, but there's a fundamental problem with such an arrangement. If you're doing a deal with the Knicks and the Knicks only, there's nothing of real value coming back the other way, which is the whole point of doing a deal in the first place.

Unrealistic as some of the proposals this offseason have been, they've at least been on the right track stylistically. Deals bringing back Paul, Hield, or even someone like Victor Oladipo are centered around making the team better while Joel Embiid and Ben Simmons remain in Philadelphia. A deal with the Knicks would be a long-term move, one that might have been celebrated during "The Process" but ultimately is tough to sell to the people who matter at this stage.

Pandora's Box has been opened, so to speak. This team signaled their intent to contend and contend now the moment they pushed in chips for Jimmy Butler and Harris during the 2018-19 season. It sent a message to a lot of people, including Simmons and Embiid, that they were preparing to go for it. Failing to move forward in such a miserable fashion already threatens to unravel the whole program. Any trades made that don't help Embiid and Simmons win sooner than later risk the acceleration of discontent that already grew last season when Embiid admitted he was not himself to start the year.

The other issue with making a Knicks-centric trade is that moving Horford or Harris in a cap-dump deal doesn't actually fix anything, and arguably makes them even worse.

With some insiders speculating the salary cap will remain flat at around $109 million, the Sixers couldn't get under that number even if they dumped Harris' $34 million and change without taking salary back. They could if they also renounced the rights to the various players they have cap holds for, but those individual salaries aren't much on their own (about $1.7 million apiece) and some belong to players they might try to keep (like Alec Burks and Glenn Robinson III). There's no real purpose to clearing the money on its own outside of helping out Joshua Harris' checkbook.

I would argue the only world where cap-dumping moves provide value to Philadelphia is one where they can dump both Horford and Harris, using the roughly $61 million freed up (plus renounced rights for other players) to go chase bigger fish. Not only is that pretty much impossible, the 2020 free-agent class is also bereft of a true needle mover anyway, bringing us back to the first problem of taking a step back. Forking over additional assets for the privilege of still not being able to pay anyone would be misguided, and most likely end with the Sixers overpaying another role player or role players, plural.

Before you completely lose hope, there's still value the Knicks can provide to the Sixers in trade talks, they just need to involve other teams. If the Kings or the Thunder want to move their big contracts without taking on the likes of Horford or Harris, for example, the Knicks could eat the dead weight (plus assets), allowing the Sixers to pick up a win-now piece and everyone else to achieve their offseason goals.

However, if all the Kings or Thunder want is to dump the Paul or Hield contracts (I'm not convinced that's the case), they could do deals with the Knicks without the Sixers being involved. Since the Sixers are trying to turn their own bad money into good, or at least money that makes more sense with their stars, Philadelphia could have to provide extra incentive to make a trade happen and get involved in that process. That could end up squeezing them out of assets they can ill-afford to lose, or young, cheap players they need to win with this bloated roster.

That brings us back to square one. Bad as the fit has been with Horford and Harris, the Sixers can't afford to deal them away for financial purposes only.

It highlights the difficult job ahead. They need to keep the stars happy, clean up the books, turn ill-fitting parts into better ones, and do it in a climate where many teams could end up shedding salary to cope with revenue losses during a pandemic. Good luck.