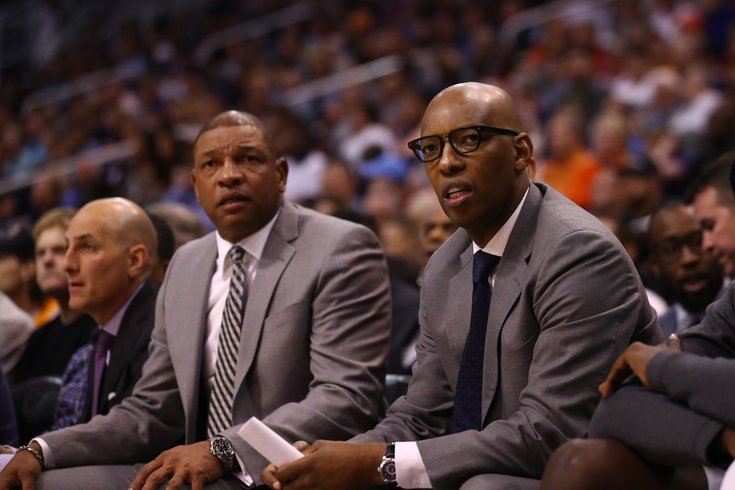 New Sixers head coach Doc Rivers (left) with assistant coach Sam Cassell during a game together with the Clippers.

The Sixers are hiring Sam Cassell for an assistant coach role under Doc Rivers, a team source confirmed on Wednesday afternoon. Keith Pompey of the Inquirer was the first to report the news.

A candidate who was a longshot to get the head coaching gig in Philadelphia, Cassell has been grinding through the coaching ranks since before his playing career even ended. During his final NBA season in 2008-09, Cassell was a member of the Boston Celtics' active roster but never appeared in a game, serving as a de facto assistant coach to Doc Rivers in the season following their 2008 championship.

By late May 2009, he was already on the bench as a coach for real, joining his former head coach in Minnesota, Flip Saunders, on the staff for the Washington Wizards. It was in Washington where Cassell first developed a reputation as an important mentor for guards, earning praise for his work with Wizards point guard John Wall — including from Wall himself, who says Cassell helped him with his jump shot and approach to the game.

Other players have taken it a step further. Former Celtics teammate Paul Pierce, admittedly with an axe to grind against Ray Allen, claimed that Cassell was the guy who made up Boston's real "Big Three" during the title season, both for his role as a bench spark and his desire to achieve team unity away from the court.

Compared to their other new coaching hire Dan Burke, we don't know quite as much about Cassell from a tactical or philosophical standpoint. It stands to reason, however, that Cassell will have his biggest impact on the guards, where Philadelphia needs as much help as anyone in the league.

No one could benefit more from his hiring than Ben Simmons, who could stand to learn a lot from how Cassell carried himself as a player. An up-and-down shooter throughout his career, Cassell nonetheless carried himself with a level of fearlessness that always made him dangerous in big moments, including the early years of his career, when he helped the Houston Rockets win back-to-back titles as an important bench player.

His 31-point outburst in Game 2 of the 1995 Finals was an absolute guard clinic, with Cassell knocking down threes, taking guards down to the post, and playing off of Hakeem Olajuwon to great effect. Cassell's career brought him close to some great big men, and the lessons he can pass on to Simmons (to say nothing of Shake Milton and others) about that dynamic should be invaluable.

The variety Cassell had to his game is perhaps his biggest appeal as a coach and teacher, with his adaptability as a player theoretically giving him a wide base to draw from as a coach. If he can't coax Simmons into taking threes, the former midrange master might at least get him to step in and take some shorter jumpers.

Plus, the Sixers now have a guy on the coaching staff who routinely busted out the "big balls" dance during his playing career. What's not to love about that?