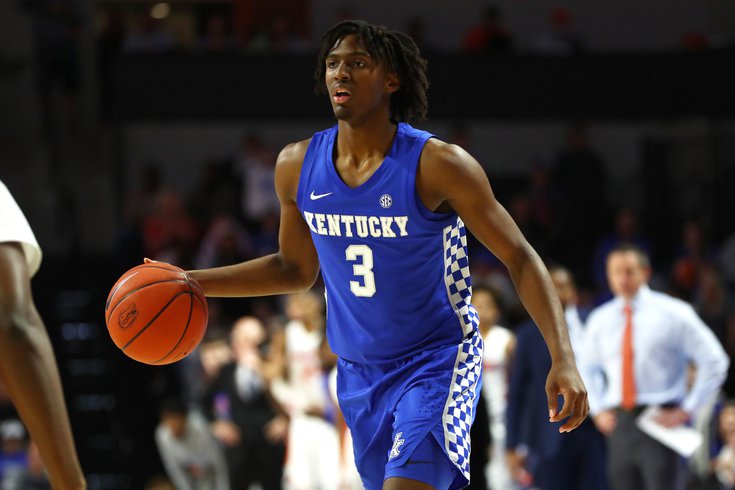 The Sixers have plenty of options with the No. 21 overall pick next week.

Kentucky's Tyrese Maxey doesn't represent a perfect fit for Philadelphia, and stop me if you've heard this before — there are questions about his jumper coming into the league. For some of you, that makes selecting him a non-starter. But he's a two-way player with a good bit of talent that will draw interest in the lottery, so he will certainly deserve consideration if he falls on draft night.

How do you weigh college shooting vs. free-throw success and excellent touch? That's the million-dollar question.

In contrast to the players we have studied so far, Maxey's strengths are around the basket rather than beyond the three-point line. No one would confuse him with a catch-and-shoot wizard, but he is a terrific natural finisher with a lot to like as an attacker.

There were few guards I watched this season who showcased a better understanding of opposing rim protection and help defense than Maxey did. But awareness is only half of the battle here, and you have to be able to execute at the rim on top of that.

That's where Maxey's body control comes in. He does an excellent job of adjusting on the fly, choosing appropriate speeds to attack the rim based on the situation. The reverse layup is a specialty of his, with Maxey showing the ability to finish under/around the rim with either hand.

To show you what I mean, both of these finishes end with Maxey finishing in traffic on the right side of the basket. But they necessitate very different approaches, a meandering Euro step vs. a more sudden two-footed leap:

When you combine all that with a soft touch around the basket, you have a guy who is going to draw attention in the painted area, always a welcome thing for any team. If teams load up to stop him at the rim, Maxey has a repertoire of floaters that will help him catch big men by surprise who are loading up to defend the rim.

Among the guys with point guard size we've profiled so far (Maxey, Tyrell Terry, and Cole Anthony), Maxey is far out in front as the best defender among them. There's a lot less projection to be done on basically every front. His footwork is strong, he competes hard, he uses his body well, and he does a great job of navigating through traffic/screens to keep up with his man. Maxey doesn't take plays off, and he gets the most out of a strong frame.

Certain matchups will probably give him trouble at the next level, but he projects as a good, perhaps even very good point-of-attack defender at the NBA level. That's a secondary need for Philadelphia, but being able to play consistently tough guard defense for 48 minutes is an excellent way to wear opponents down and limit the effectiveness of opposing guards, which has been an issue over the last few years for Philly.

Away from the ball, Maxey's instincts continue to be strong. He plays like someone who takes the mental prep of that side of the ball seriously, combining good initial positioning with smart rotations, and without the off-ball gambling that gets a lot of young players in trouble. Maxey's defensive approach should make it easier for him to get and stay on the floor than it will be for other rookies and suggests he will bring something to the table even if his offense is a work in progress to start.

Outside of his finishing around the basket, you have to do a lot of projecting for Maxey on offense. I don't think he's a "project" or a particularly worrisome shooter, but there is extra pressure on incoming players to shoot well in Philly.

Do you believe his free-throw numbers (83.3 percent) or his three-point shooting (29.2 percent on 113 total attempts) is the better indicator for future success? Some I've talked to lean toward the former. Two scouts I spoke with think Maxey is a better shooter than he showed at Kentucky, believing he can be at least an average shooter at the next level.

That would change the conversation about drafting him considerably, almost certainly pushing him closer to the top of the draft. I'm a little less sure about that one.

Maxey's mechanics are mostly fine, but he'll probably have to tweak his release point (which was low at the amateur level), which always invites some uncertainty as guys adjust the way they have always done things. Maxey was well below-average as a catch-and-shoot guy — he made just 25 percent of his attempts despite 60 percent of those attempts coming on possessions deemed "unguarded" by Synergy.

On another team, it's easier to gamble that he's better than the numbers say. On this team, if Maxey is as bad a shooter as he was in college, it compounds an already glaring issue.

The shooting concerns must be taken seriously because there's a chance they could limit the effectiveness of his excellent finishing ability, should teams just decide they'll leave him alone on the perimeter. If you can take that away from Maxey, there's not a ton left for him to hang his hat on.

He's just okay as a playmaker and his handle is functional but not special. Even optimists on Maxey's upside believe he's going to be best suited as a secondary attacker/creator, and that belief stems from the idea that your primary guy is a "normal" player. If your two primary initiators are Maxey and Simmons, well, you might run into some walls in the paint.

I think Maxey is a better athlete than he is probably given credit for, in the sense that his traits are functional instead of theoretical. But the gaps close quicker and the bigs are much larger when you get to the next level, and Maxey's handle isn't anything special. He was prone to having the ball knocked away in college, and he has to rely heavily on his (admittedly very good) body control to make up for issues handling the ball.

That being the case, Maxey could end up becoming overly reliant on pull-up jumpers from midrange, a fallback for him when he has his first option cut off. Even if you believe in his shot, that's not a way to make an effective living in the NBA, save for being one of the best mid-range shooters alive. Though he's actually above-average off-the-dribble compared to his peers, Maxey isn't anywhere close to that level yet.

Despite the belief in Maxey from many scouts and a high-level skill to hang his hat on, the projections currently place Maxey around Philadelphia's range. Sam Vecenie of The Athletic has him slotted to the Heat at No. 20 in his most recent mock draft, Kevin O'Connor of The Ringer has him at No. 15, and Jeremy Woo of Sports Illustrated has him slated to go 16th. Slightly ahead of their positioning in every case, but not drastically so.

(Of note: in a newly-released mock from the ESPN draft team, they have Maxey going 10th overall to Phoenix. So it's exceedingly possible he's not available when Philly is on the clock.)

I like Maxey quite a bit relative to some of the other players in this class because there are two things I feel he'll do at the next level with basically any team. He'll get in the good graces of any coach with his commitment to the defensive end of the floor, and his use of his body around the rim should add up to a lot of free-throws generated, a great way for him to add offensive value as teams wait for his shot to catch up.

Though I think Philadelphia is a shaky fit for Maxey and vice versa, running scared of prospects because of college shooting concerns can burn you. A lot of people still steam over the team's swap of Mikal Bridges for Zhaire Smith on the night of the 2018 draft, but far fewer discuss how much better Shai Gilgeous-Alexander is than either guy, and he was picked one slot after Bridges. The only real knock on SGA coming into the league was his reluctance to shoot, and though he has been just average since entering the league, he was/is the sort of creator who could ease the burden on Philadelphia's idiosyncratic primary stars, something they've shown they need.

If Maxey somehow falls to No. 21, there's a pretty solid chance he's the best talent left on the board. Ballhandlers who can put pressure on the rim and suck coverage away from Embiid or Simmons have the potential to create a lot of easy baskets for Philadelphia's two stars, especially with second-unit lineups that could have better spacing than the starting group from last year.

But I do worry about how this team heightens concerns about Maxey, and vice versa. If you're searching for the cleanest possible fit, the Kentucky product isn't it.