Sixers prospect profile: Is Cole Anthony a diamond in the rough, or overrated? 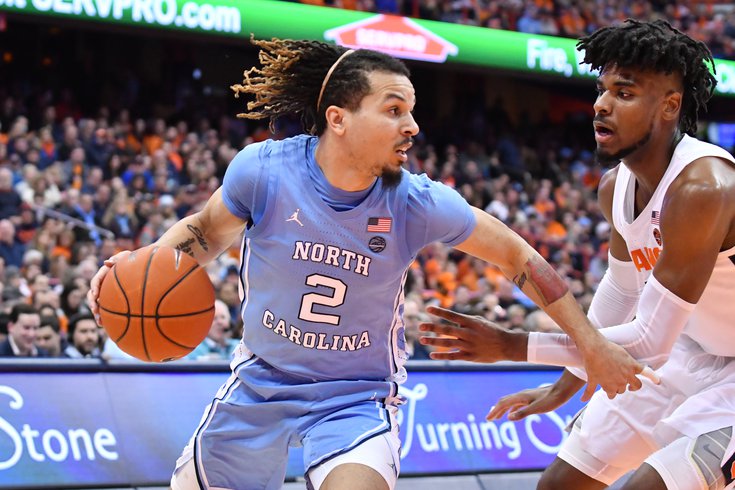 Will the Sixers be able to nab a top talent like Cole Anthony at No. 21?

Could Cole Anthony be that guy? Considered one of the top players in the country entering the 2019-20 NCAA season, a tumultuous year at UNC has created a lot of uncertainty for Anthony heading into draft night. Once in play to be a top-five selection, Anthony's range appears to be wide in the week before the draft.

Philadelphia will have to consider how to factor in Anthony's team context to the dip he has seen over the last year, and whether this kid is undervalued now or was just overrated previously.

Anthony is a shooter, but not anything like the shooters we've already covered here this week. At the next level, Tyrell Terry and Desmond Bane are going to make their living as catch-and-shoot guys. Anthony is a pull-up, off-the-dribble shooter, a guy who can potentially be a three-level scorer, and that's why he was so highly regarded coming out of high school.

The No. 2 recruit in the ESPN100 heading into last season, Anthony ended up on an underperforming, ill-fitting roster at North Carolina. His ability as a pull-up threat shined through anyway, and if he's going to help a team at the next level, it will be because of his fearlessness as a scorer.

Guards at the amateur level who can pull up and knock down shots from deep three-point range are few and far between, even as the sport has emphasized the skill more. Despite having all the attention of the opponent on a night-to-night basis in college, Anthony still graded out well as an off-the-dribble shooter last season, and his numbers in isolation were among the best in the country. If teams go under screens or drop too hard against him in pick-and-rolls, he will make them pay.

Pull-up shooting is a difficult art because it involves tying together so many different skills — the merger of one's handle and shooting motion, the importance of footwork, reading a defender's body language, and comfort shooting from odd angles. Anthony is far ahead of the curve at this point in his career, and it will open up the game for him despite other weaknesses.

The Sixers have not had many guys who can do this in recent history, and as much as we all agree that they need "shooting," it is underrated how desperately they need individual shot creators. In theory, they have a handful of guys who can take and make open threes (Tobias Harris, Furkan Korkmaz, Glenn Robinson III, Mike Scott) when presented with the opportunity. But you can't push your way to a top-10 offense without bolstering your off-the-dribble offense, which Anthony would be able to do almost immediately.

While Anthony didn't have many opportunities to showcase it last season, he has potential as an off-ball shooter, though that's based on a smaller sample of catch-and-shoot looks while with the Tarheels. He finished in the 86th percentile on catch-and-shoot jumpers last season, showcasing an ability to shoot off movement and, at the very least, knock down open kick-outs. That last part is critical for the Sixers.

I'm comfortable projecting that he will continue to grow as an off-ball shooter at the next level because he has shown flashes already and is good at a sort of shooting that is typically much more difficult. In this regard, his confidence will serve him well — Anthony is not going to catch a kick-out and play hot potato.

This section will probably sound harsher than it's meant to, but if Anthony has feel for the game, he didn't get to show it much during his lone season at North Carolina. And while there are legitimate reasons to point out the team context he was in, he would not be joining a situation that is a markedly better fit for what he likes to do.

The two biggest gripes with Anthony are his shot selection and his poor finishing at the rim. Some scouts believe the latter is not representative of his actual ability, and they have a point — Carolina often played with two bigs and with Anthony as the lone perimeter playmaker/scorer last season, a decision that cramped the floor and made it easy to crash on Anthony's drives. Carolina barely cleared 30 percent from three last season, good for 313th in the country.

Still, the numbers are bad. Anthony took just 20 percent of his total attempts at the rim (including shots in transition) and made only 53.6 percent of those looks. The efficiency is a far cry from some of his peers in the class like Tyrese Maxey, and far below the volume of someone like Kira Lewis.

The problem from a Philadelphia perspective is that the team context would not aid Anthony much on this front. Joel Embiid will be occupying the paint and defenses will continue to load up against Ben Simmons, making Anthony's life difficult as a finisher from day one.

Anthony's efficiency numbers don't tell the whole story, but they do show how problematic his shot selection can be at times. Having a neon green light at Carolina is not the only reason a guard with his talent shoots 38 percent from the field for the season. Anthony sees and takes shots that often aren't there, which will get you in trouble with vets and coaches alike.

In a way, he's a victim of his own ability, high off of the supply of the shots he's capable of hitting. But framing it that way lets him off of the hook, especially because you see it bleed into his general approach to the game. Anthony was fairly predictable from possession-to-possession in college, and though scouts believe he improved over the course of the season, it wasn't difficult to tell if he was going to shoot, drive, or attempt to playmaker during different stretches in a game.

Since he isn't a particularly advanced playmaker, you would want to give him lots of rope as an attacker at the next level. Can you do that when Anthony hasn't shown he knows when and where to draw the line? Anthony only registered 88 assists against 77 turnovers at North Carolina, not doing much to uplift what was admittedly a bad UNC team last season. He could end up being a player whose value is derived solely from his shooting/scoring, which is a tough way to make a living, especially when most of your shooting comes off of your own dribble.

Anthony's primary defensive weaknesses are as a pick-and-roll defender, which is a scary proposition as he transitions to the NBA. Between shaky footwork and lateral quickness, Anthony has some problems at the point of attack, where he'll be stationed for the vast majority of his time in the league. I'm less concerned about his attentiveness, which was an issue at times at UNC but I think could reasonably be coached up at the next level. There are enough IQ flashes for me to think he's not a lost cause, and at times he's even an impact guy on D.

Anthony has fallen a long way since bursting onto the scene with a 34-point outing against Notre Dame last season. With mocks suggesting he could fall into Philly's range, it doesn't seem out of the question they could have a shot to pick him at No. 21, no trades necessary.

The question the Sixers would have to ask themselves is whether Anthony is a distressed property they can get for way below his real value or an overrated prospect who was never as good as recruiters thought. Was his AAU production an aberration? Anthony is a bit older than a lot of his peers were in his high school class, and once he was up against same-age or older competition at the college level, he faltered in a big way. How much cover can we give him as a result of the poor college situation and the meniscus injury that robbed him of part of his season?

Then again, in this part of the draft, you have more reason than ever to take big swings on guys you believe to be talented even if they come with warts. You're fortunate to get contributors the further you move through the draft, and Anthony could end up being a scoring guard who sustains your offense by himself for long periods of time. I am not his biggest fan, but I think his pull-up ability is that good, and I think the attention it will draw will open up lanes for Anthony that he wasn't afforded at UNC. Drives to the basket and passing lanes should be much clearer than they were last season.

With Doc Rivers specializing in getting the most out of offense-first guards, Anthony could learn and grow a lot in Philadelphia. But it's not a perfect fit, and it wouldn't be a stunner if it ended poorly for both parties.