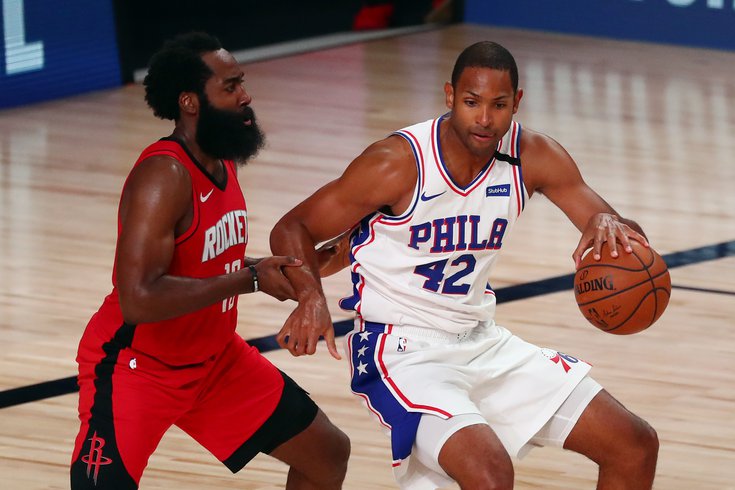 Sixers fans would love to see one of these players in a Sixers uniform in 2021. But just the one.

The 2020 NBA Draft is only two days away, and the Sixers have been conspicuously quiet in the lead-up to the big evening. That's to be expected for a team in the process of changing management, and certainly for a team that could be on the verge of a big trade or two. Outside noise doesn't help get things done.

So as we wait for the rare Wednesday evening draft — seriously, does everything about this year have to feel unnatural? — we're going to try to keep you caught up on all the latest and biggest rumors in Sixers world right now. Trade season opens up today, so we might as well start with the biggest potential trade there is to be made.

It's the trade rumor/speculation that won't go away until someone makes a deal, or Daryl Morey is unceremoniously removed from Philadelphia's front office in a burner account scandal. You should just get used to hearing about it and talking about it in the meantime.

Since we last spoke, when Kendrick Perkins was our only source for all things Harden, big developments have taken place. The biggest one, for the time being, was Adrian Wojnarowski, Zach Lowe, and Ramona Shelburne teaming up to report Harden's interest in potentially playing in Brooklyn:

As Houston Rockets star James Harden considers his uncertain future with the franchise, the Brooklyn Nets are rising to the top of his list as a possible trade destination, sources told ESPN. The idea of joining Kevin Durant and Kyrie Irving in Brooklyn is resonating with Harden, sources said.

Durant and Harden -- past teammates with the Oklahoma City Thunder -- have recently discussed the possibility, but there have yet to be trade discussions between the two front offices. Harden has been increasingly uneasy about the Rockets ability to compete for an NBA future and has been considering the possibility of pushing to play elsewhere before his contract expires, sources said.

The Nets are believed to be considering the viability of the idea, but it is unclear how far the franchise would go in delivering Houston the assets it might require to trade for Harden.  [ESPN]

This is a pretty huge development for the entire league in the sense that Harden has remained firmly committed to Houston through ups and downs over the years. Word like this would not leak out without intent, and it suggests Harden is getting closer and closer to exiting the situation.

Philadelphia's connection to the whole thing is still somewhat mysterious. Even before they were able to lure Daryl Morey, there was smoke about the team wanting to make a push for Harden. Now that they have the executive who basically wrote him a love note on the way out the door in Houston — and the guy who openly collaborated with Harden in the decisionmaking process for roster moves — everyone assumes they're in on him. But they aren't actively seeking to attach their names to a Harden sweepstakes, at least not yet.

The big key here will be exactly how hard Harden pushes to go to Brooklyn, should that be his preferred option. He has the stature to all but force his way to a team should he choose to use it, as we've seen happen in the cases of other stars in recent years. The Sixers need to look no further than the Jimmy Butler trade as a reason to take heed of player preference. Miami was high atop Butler's list for a future home before he ever left Minnesota, and that turned out to be no bluff when free agency opened last summer.

If Brooklyn is simply part of a shortlist, that's when it gets interesting for Philly. If they really wanted to, they have a couple of the best trade chips in the league in Joel Embiid or Ben Simmons, proven commodities who can help you compete now and who are young enough to continue growing as players and people. The Nets, for example, have a bunch of nice pieces they can send to Houston in a theoretical deal, but they don't have an A1 player or pick to send the other way.

So far, sources with the team have all insisted that Embiid and Simmons are not on the table, the same thing they've said for years no matter how erratic the team was under their leadership. In Embiid's case, Morey went out and gave a glorified stump speech at his opening presser, celebrating Embiid as a potential title-winning centerpiece.

But it's too early to say anything is off of the table for Philly, especially if an MVP hits the trade market. To get a big name, they're going to have to give one up, because their other big-money guys are on unappealing contracts and pale in comparison to the players other would-be contenders could trade.

In many ways, the Mills rumor that circulated from Kevin O'Connor late last week is the closest we've come to a real Sixers roster development this offseason. Sure, interest in Chris Paul has been there, there have been some cursory Buddy Hield rumors, but there's as much wishcasting there as there is truth.

For those playing catch-up, the word from O'Connor as part of his updated mock draft:

The Spurs are up to something. League sources say they’re shopping point guard Patty Mills, with teams such as the Bucks and Sixers expressing interest. A deal with Philadelphia would probably bring back Josh Richardson, league sources say. They’re also looking to unload LaMarcus Aldridge and DeMar DeRozan; I’ve heard the Lakers have interest in acquiring DeRozan (for Kyle Kuzma and Danny Green), and as mentioned, the Warriors may want Aldridge. Any separate trade could influence their choice here.  [The Ringer]

All things considered, Richardson is the more valuable player "in a vacuum." He's a superior defender and the much younger player, but as we saw last season, he also doesn't make a whole bunch of sense with Philadelphia's core guys. He's an erratic playmaker, an occasionally reluctant shooter, and any team relying on him as a heavy pick-and-roll creator will find themselves in trouble.

Mills would represent a much cleaner fit for the Sixers, a sweet-shooting guard with speed and change-of-pace that is comfortable on or off the ball. Like Richardson, he's not a guy you want outright running your offense, but he has more utility and specifically adds value in trouble areas on offense. He's in a whole different universe as a catch-and-shoot player and has more pep in his step than any of the other guys Philly relies on to shoot at the moment.

He would also provide Philadelphia with a veteran guard who could start or serve as a good sixth man, something that would allow them to groom a developing guard over at least the next year.

While we're on the subject...

From the desk of Inquirer beat writer Keith Pompey...

But what about Isaiah Joe? The former Arkansas shooting guard is one of the sleepers of the draft. According to sources, he was high on the Sixers' radar before Daryl Morey was hired as the president of basketball operations two weeks ago.

One source said the expectation was that the Sixers intended to select the sharpshooter in the draft. While picking him at 21 might be considered a reach, the belief is it would happen early in the second round.  [Inquirer]

Circling back on something we discussed earlier in the draft process, Sam Vecenie of The Athletic teased that there were rumors the Sixers made another draft promise, none solid enough for him to nail down entirely. And with Joe backtracking from his commitment to return to school just weeks after he made it in August, it stands to reason Joe is a guy who may have gotten a promise from someone, even if it isn't Philly.

Joe has considerable upside as a shooter — his percentages underwhelmed this past season, but he shot 41.4 percent from deep on eight attempts per game during his freshman year, and his free-throw numbers and mechanics suggest it'll translate well to the league. His shot is fairly effortless, with Joe taking and making shots from deep three-point range in college without blinking. If he wasn't so thin/frail, Joe would probably be better regarded than he is, but as it stands he makes a lot of sense for Philly on paper.

Who is Philly targeting?

The moment you've all been waiting for, and I wish I had a better answer to give you than I do. Pre-Morey, I had a better sense of what I think their draft plan was heading into the night, the expectation being they'd make an "upside" pick at No. 21 and target guards with shooting upside in the second round. Now? I'm preparing for a wide range of outcomes.

A lot of players that are popular among Sixers fans and draft analysts have at least spoken to the Sixers during the pre-draft period. Desmond Bane, Cole Anthony, and Tyrell Terry are three realistic candidates to be drafted at No. 21, and all three said in Zoom calls that they'd been in contact with Philly. In fact, Bane even identified who he spoke with specifically: Philadelphia's Vice President of Scouting, Vince Rozman.

Rozman is one of the longest-standing members of the front office and as luck would have it, is the guy doing Philadelphia's only official pre-draft interview on behalf of the front office, an event that will take place later Monday morning. The drafts since he came on board in 2007 have featured a variety of decisionmakers with all sorts of priorities, and frankly, Philadelphia has done pretty well at snagging talent during that time period, some high-profile misses notwithstanding.

This is Morey's show, and Morey has rarely had picks at his disposal on draft night over the last half-decade. It's shaping up to be a wild night (and a wild week, for that matter) for Philly.