Sixers select Arkansas' Isaiah Joe with pick No. 49 in second round 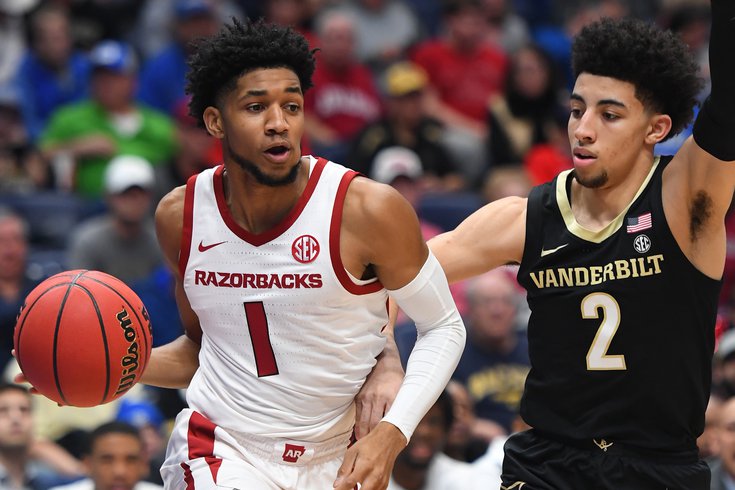 After speculation about a promise made before the draft, the Sixers ended up selecting Arkansas shooter Isaiah Joe after all, using the No. 49 pick in the second to bring in one of the most prolific shooters in college basketball.

Joe has considerable upside as a shooter — his percentages underwhelmed this past season (34.2 percent from three), but he shot 41.4 percent from deep on eight attempts per game during his freshman year, and his free-throw numbers and mechanics suggest it'll translate well to the league. His shot is fairly effortless, with Joe taking and making shots from deep three-point range in college without blinking.

The volume he put up in the SEC is pretty staggering even for a sport that has changed rapidly to account for the value of the three-point line. 9.1 attempts per game across two seasons is impressive on pure volume alone, and Joe has a couple of other traits that should help him establish a role at the next level. He reads the game well defensively to create steals without freelancing too often, and while he's not an advanced playmaker, Joe is a decent one-read passer who can at least keep the ball moving.

There's one main reason Joe fell all the way to No. 49 is rail-thin and doesn't have the core strength to make up for that. It leaves him with a lot of questions to answer on defense even though he possesses good instincts. He's also not much of a shot or space creator, which is likely to make him wholly reliant on others to get his looks. It is not an exaggeration to say Joe is the sort of guy who gets stopped in his tracks by contact, which will be a problem for him getting through screens on defense and moving through traffic on offense.

That latter bit casts some doubt on his signature skill. If he can't create separation via movement, and thus can't become a threat as a movement shooter, there's a cap on just how impactful of a shooter he can be. He didn't show much as an off-movement player in college, and those are the sort of shooters who historically have thrived in Doc Rivers offenses.

Luckily, Philadelphia is a pretty ideal situation for him to thrive in a spot-up role. With the ball in the hands of Joel Embiid, Ben Simmons, and to a lesser extent Tobias Harris, Tyrese Maxey, and Seth Curry, he will be able to focus on spot-up looks predominantly as he fills out his frame. I'm not super bullish on him becoming a creator because of his strength concerns, but it's a decent flier on a kid with a defined skill, which is more than you can say about a lot of guys this late in the draft. If he creates turnovers away from the ball on top of that, you consider it a nice bonus.

(Beyond that, Joe was so prolific in college that there's reason to bet he figures it out as a movement shooter in some form or fashion, and he has displayed the chops to shoot the ball off-the-bounce at the college level, too. I have little doubt he'll find a way to hit shots at the next level, provided his frame doesn't completely hold him down on both ends.)

Whether a promise was made or not, and perhaps we'll find that out soon, the Sixers certainly didn't suffer for it, and they ended up getting their guy anyway.

Philadelphia has sent a clear message during this draft about what they think they need, and the best thing you can say about their first night under Daryl Morey is that they made moves that pretty obviously make sense on paper. No overthinking, no shoehorning guys into roles they won't fit in, just an understanding of what they have and what they need.

Here are some highlights of the newest member of the Sixers...