Sixers select Tyrese Maxey with No. 21 pick in 2020 NBA Draft 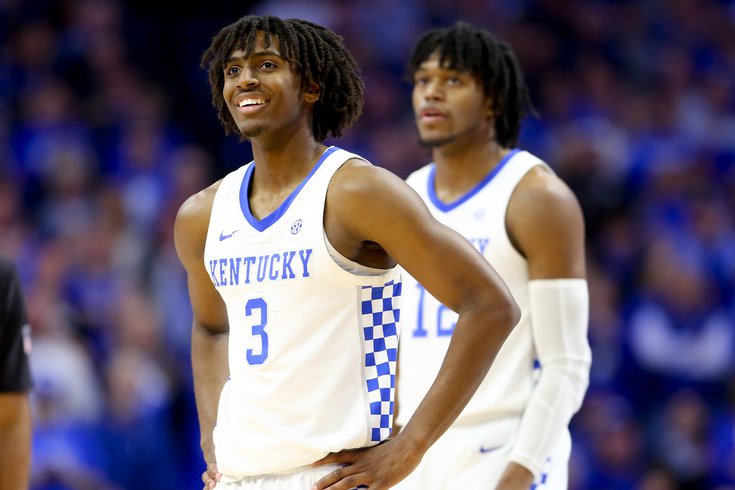 With the No. 21 pick in the 2020 NBA Draft, the Sixers selected Kentucky guard Tyrese Maxey. It may feel like a secondary concern on a night where Philadelphia traded away Al Horford, but he represents an important part of their future all the same.

He's not the elite shooter some fans wanted, but few guards in college basketball showcased a better understanding of opposing rim protection and help defense than Maxey did. Maxey's strengths are around the basket rather than beyond the three-point line. No one would confuse him with a catch-and-shoot wizard, but he is a terrific natural finisher with a lot to like as an attacker.

But awareness is only half of the battle here — you have to be able to execute at the rim on top of that. That's where Maxey's body control comes in. He does an excellent job of adjusting on the fly, choosing appropriate speeds to attack the rim based on the situation. The reverse layup is a specialty of his, with Maxey showing the ability to finish under/around the rim with either hand.

He's a very difficult player to stop around the basket, and when a guy is able to manipulate big men the way Maxey does in the paint, you can envision him dropping off a lot of passes for Joel Embiid and Ben Simmons dunks.

When you combine all that with a soft touch around the basket, you have a guy who is going to draw attention in the painted area, always a welcome thing for any team. If teams load up to stop him at the rim, Maxey has a repertoire of floaters that will help him catch big men by surprise who are loading up to defend the rim.

Among many of his guard peers like Cole Anthony and Tyrell Terry, Maxey is far out in front as the best defender among them. There's a lot less projection to be done on basically every front. His footwork is strong, he competes hard, he uses his body well, and he does a great job of navigating through traffic/screens to keep up with his man. Maxey doesn't take plays off, and he gets the most out of a strong frame. He's also an instinctive defender away from the ball, lending credence to the idea that he'll be a strong team defender at this level.

Outside of his finishing around the basket, you have to do a lot of projecting for Maxey on offense. I don't think he's a "project" or a particularly worrisome shooter, but there is extra pressure on incoming players to shoot well in Philly.

Do you believe his free-throw numbers (83.3 percent) or his three-point shooting (29.2 percent on 113 total attempts) is the better indicator for future success? Some I've talked to lean toward the former. Two scouts I spoke with think Maxey is a better shooter than he showed at Kentucky, believing he can be at least an average shooter at the next level. He is just a shotmaker more than he is a "shooter" at the moment, though that could change over time.

Maxey's mechanics are mostly fine, but he'll probably have to tweak his release point (which was low at the amateur level), which always invites some uncertainty as guys adjust the way they have always done things. Maxey was well below-average as a catch-and-shoot guy — he made just 25 percent of his attempts despite 60 percent of those attempts coming on possessions deemed "unguarded" by Synergy.

Some of his other concerns, particularly playmaking, are muted playing next to a guy like Ben Simmons. Without having to take on a severe burden as the undisputed lead playmaker, Maxey can focus on what he does best as he rounds out his game.

I like Maxey quite a bit relative to some of the other players in this class because there are two things I feel he'll do at the next level with basically any team. He'll get in the good graces of any coach with his commitment to the defensive end of the floor, and his use of his body around the rim should add up to a lot of free-throws generated, a great way for him to add offensive value as teams wait for his shot to catch up.

Though I think Philadelphia is not the perfect fit for Maxey and vice versa, running scared of prospects because of college shooting concerns can burn you. A lot of people still steam over the team's swap of Mikal Bridges for Zhaire Smith on the night of the 2018 draft, but far fewer discuss how much better Shai Gilgeous-Alexander is than either guy, and he was picked one slot after Bridges. The only real knock on SGA coming into the league was his reluctance to shoot, and though he has been just average since entering the league, he was/is the sort of creator who could ease the burden on Philadelphia's idiosyncratic primary stars, something they've shown they need.

With Al Horford gone, there are fewer stressors on Philadelphia's floor spacing, and they finally are starting to resemble a modern NBA team. They have guards of different sorts for the first time in a long-time, from pure floor spacers to rim attackers, giving them options in terms of lineup construction.

Ballhandlers who can put pressure on the rim and suck coverage away from Embiid or Simmons have the potential to create a lot of easy baskets for Philadelphia's two stars, especially with second-unit lineups that could have better spacing than the starting group from last year. If they don't come away with anything/anyone else tonight, this feels like a successful night at the office for Daryl Morey, Elton Brand, Doc Rivers and the rest of the gang.

If you want to get a look at the newest Sixers player and have been under a rock for the last year or so, feel free to take a gander at his college highlight reel below: