Limited edition A.I. collectible could be a solid holiday gift 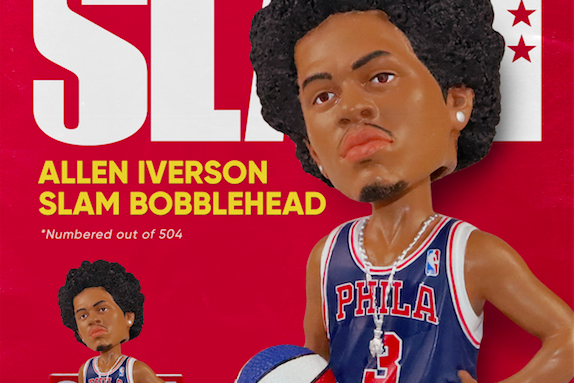 A limited edition bobblehead from FOCO commemorates Allen Iverson's appearance on the cover of SLAM Magazine in March 1999.

The Philadelphia 76ers have a long history of game-changing selections in the NBA Draft — and more than a handful of costly misses, too — but none have proven more impactful than the first overall pick that brought Allen Iverson to Philly in 1996.

Iverson's Hall of Fame career and cultural impact need no refreshers here, but bobblehead collectors and gift-hunters galore will be pleased to know that A.I. has been commemorated again with an instant classic.

Sports and entertainment merch company FOCO unveiled a new bobblehead on Wednesday, featuring a young Iverson as he appeared on the cover of the 32nd issue of SLAM Magazine in March 1999. The story, "Allen Iverson is Soul on Ice," covered A.I.'s rise to prominence in Philadelphia.

“Throughout his career, Allen Iverson dazzled basketball fans all over the world with his elite skills as a scorer and ball handler,” said Matthew Katz, senior licensing manager at FOCO. “We’re very excited to partner with SLAM Magazine to release this limited edition bobblehead, and we are confident 76ers fans and basketball fans a whole will be eager to add this to their collections."

The limited edition bobblehead is available at FOCO for $45. And if you're more into mental exercise, there's a 500-piece puzzle of the SLAM Magazine cover available here for $25.

The Sixers enter Wednesday night's draft with the 21st overall pick, amid speculation that new president of basketball operations Daryl Morey may try to orchestrate a trade. If any of tonight's selections bring the kind of energy Iverson gave Philadelphia, they'll be welcome additions to a team entering a new era.