In related news, the Sixers have traded Al Horford and picks to the Thunder for Danny Green 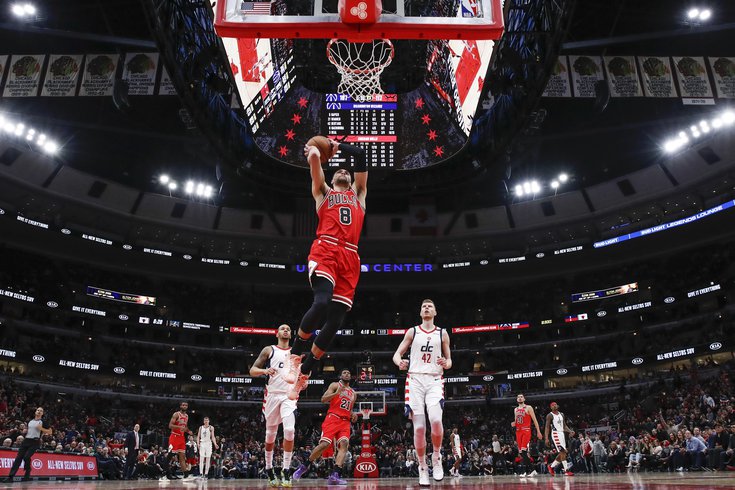 Chicago Bulls guard Zach LaVine (8) goes up for a dunks against the Washington Wizards.

UPDATE [7:26 p.m.] — After the Sixers got rid of Al Horford's contract in a trade with the Thunder that brought back Danny Green and before the draft kicks off, we have something else to report. And it's probably not what Sixers fans wanted to hear. It appears there's nothing brewing between the Sixers and Bulls in regard to Zach LaVine. That's according to our own Kyle Neubeck...

Despite some earlier buzz on LaVine, I'm hearing there are no current discussions between Philly and Chicago (which may be obvious, given Philly's acquisition of Green earlier)https://t.co/9hrr5i4ZF0

This will be our last update of the night as we'll now turn it over to Kyle's 2020 NBA Draft tracker, which will keep you up to date on not just the latest news and trade rumors, but, as the title suggests, the latest draft picks as well.

UPDATE [5:29 p.m.] — With just over two and a half hours before the draft, the Sixers made a huge trade by trading Al Horford and a pair of draft picks to the Thunder for shooter Danny Green.

The Sixers are trading Al Horford and a first-round and second-round pick to the Thunder for Danny Green, sources tell ESPN.

The Sixers are sending a lightly-protected 2025 first-round pick and the 34th overall pick in tonight's draft, sources tell ESPN. The Thunder are also sending Terrance Ferguson to the Sixers with Green. https://t.co/sDCfPo4T4L

The Sixers are also sending the rights to Serbian point guard Vasilije Micic to the Thunder, sources tell ESPN. Micic, 26, is considered one of Europe's top point guards. https://t.co/NXEzcdyoTH

Here's more from our own Kyle Neubeck.

UPDATE [12:03 p.m.] — According to Vince Goodwill of Yahoo! Sports, there are two big names popping up in trade rumors — Bradley Beal and Zach LaVine — and the Sixers appear to be one of the "many" teams interested.

Bradley Beal and Zach LaVine have been hot names around the league, according to league sources. Philadelphia has been one among many, but the Wizards and Bulls have rebuffed overtures.

There's not much else to go on with this rumor, but it's worth keeping an eye on for sure. If the Sixers can't land James Harden, one of these two players wouldn't be a bad consolation prize, especially if it means the team can also keep both of their young stars.

Does that mean Beal or LaVine is one of the players alluded to by Jason Dumas earlier on Wednesday?

Source: There is a growing belief in the Sixers FO that they won’t be able to land James Harden without including Ben Simmons.

But i’m told that Daryl Morey is working on something else significant and it would allow the Sixers to keep Ben and Joel.

It's only been two days since the NBA trade season officially opened and there's already a wrinkle being thrown in to the mix. That's because, on Wednesday night, the NBA Draft will be held, about five months later than when it was originally scheduled to take place. And draft night typically includes its fair share of trades.

For the most part, those trades involve future draft picks or extremely recent ones — as in, guys who were picked already that night — and considerably fewer veteran players. But with the timing of this draft, sandwiched between the trade window opening and the official start of free agency, almost anything could happen.

Does that mean a James Harden trade could go down between now and the end of the night? Certainly, but it's almost just as certain that if that deal does happen on Wednesday, it won't be your typical "draft day" trade. In fact, if that deal went down today it would completely overshadow everything else going on around the league today, including the draft picks. It would be a real "welcome to the league" moment for these kids and a reminder that while they may have been the big man on campus last year, that's no longer the case.

It's been reported that Harden, who has made his desire to be dealt known to the powers that be in Houston, has narrowed his preferred destinations to Brooklyn and Philadelphia. And while Brooklyn may seem to be the top choice for Harden, as Adrian Wojnarowski reported, the Sixers appear to be calling on a secret weapon, Philly rapper Meek Mill.

Here's more from Kelly Iko and David Aldridge of The Athletic:

Philadelphia’s interest in Harden has grown in recent weeks, sources said. Morey’s ascension to the top decision-maker spot on the basketball side as president of basketball operations is an obvious link, given the history Harden and he share, but there’s also the lure of the Eastern Conference. Rapper Meek Mill has a longstanding relationship with Harden and has been trying to convince him to come to Philadelphia, according to a source. Billionaire Michael Rubin, a close friend of Meek’s and co-owner of the 76ers, is also very fond of Harden.

But with Morey and new coach Doc Rivers just getting up to speed on the franchise, the 76ers are still contemplating the pros and cons of keeping their superstar duo of Joel Embiid and Ben Simmons together. One or the other, along with multiple other pieces, would have to be dealt to Houston in any potential deal for Harden. Still, we all know that Morey is not one to nibble at the margins; he tends to take big swings.  [theathletic.com]

Part of the reason this may help the Sixers, aside from the obvious, is that it's been reported that one of the reasons Harden wants out of Houston is because of Rockets owner Tillman Fertitta's allegiance to President Donald Trump. At least one of the Sixers partners, Rubin, is on the opposite end of the political spectrum and has done considerable work in support of social justice with Meek Mille, Jay-Z and others as part of the Reform Alliance. On top of that, the Sixers have a considerably progressive power structure at the top, with Daryl Morey and Doc Rivers leading the way.

If that's something that truly matters to Harden, the Sixers are definitely a fit in that respect.

But if Harden cares about winning, his best option may be in Brooklyn, where he would join Kevin Durant, Kyrie Irving and a Nets team that DraftKings is giving the fourth best NBA title odds, according to TheLines.com. The Sixers, meanwhile, are 12th with +3000 odds. And that's before you consider what the Sixers would have to give up in order to get Harden — one of their top two players — while the Nets could keep both Durant and Irving and have a legitimate Big 3 in Brooklyn.

The Sixers, meanwhile, would have to part ways with either Ben Simmons or Joel Embiid, plus "multiple other pieces," and our own Kyle Neubeck wrote on Tuesday that if it's the former, the team should be willing to pay the price. It's also worth noting that this isn't a free agency situation, and while Harden may be forcing his way out, he doesn't necessarily get final say over where he's traded. And a package including Simmons would almost certainly be better than anything the Nets could offer while still keeping their two superstars.

Currently, the Sixers have five draft picks on Wednesday night, including the 21st-overall pick. A lot could change between now and 8 p.m., but no matter what it is, we'll keep you updated with all the latest news and rumors right here in NBA offseason live tracker...