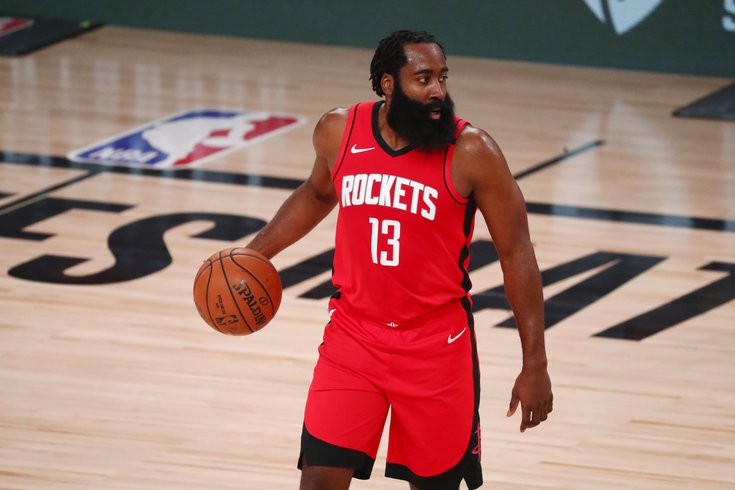 The Sixers have emerged as one of James Harden's, "top desired trade destinations" as the Houston star grows closer to leaving the franchise, according to a new report from Shams Charania of The Athletic. The Brooklyn Nets, rumored over the last week as the destination for a potential superteam, are the other team believed to be at the top of Harden's list.

While we have covered Harden smoke over the last week, including from the mouth of his former teammate Kendrick Perkins, the noise has only gotten louder the closer we get to draft night and the further we get into draft season. With Harden ally Daryl Morey sitting atop the organization, Philadelphia will be connected to Harden right up until the moment he is traded, and that should excite Sixers fans.

Insofar as Morey has an "ideal" player, Harden is it. He lives beyond the three-point line, at the rim, and at the charity stripe, the latter to an almost comical degree sometimes, much to the chagrin of fans of opposing teams. The Rockets have tried to push the envelope on embracing the three-point line under Morey's leadership, but none of it really works without Harden, one of the most prolific scorers to ever play the game and a player who embodied Houston's offensive philosophy.

The relationship between Morey and Harden is beyond that of a normal executive-player relationship. Morey's legacy (so much as he has one as a still-active exec.) will forever be linked to the move he made to acquire Harden. Once he had Harden in place, Morey moved heaven and earth to try to build a winner around his star, developing a partnership of sorts where Harden's feedback mattered a great deal in what he was doing.

His playoff flameouts aside — and there are some big ones on the ol' resume — Harden is one of a small handful of players in the league capable of being in the NBA MVP discussion every year, with his production and durability up there with any player in the league over the last half-decade. Between his age, credentials, and playing style, Harden would also become the undisputed alpha for a Sixers team that has mostly operated without one, the results of which have been disappointing.

What's more is that he is a considerably cleaner fit with Philadelphia's best player, Joel Embiid, than Ben Simmons (or any other guy on the roster) currently is. The two would be able to lean on one another to pick each other up in all the ways they need it.

Embiid is a defensive anchor to hold down Harden and an alternative form of offense when Harden's one-man show wears down. Harden is the perimeter playmaker Embiid has always needed to make his life easier on offense, with the potential for those to be a much more devastating 1-2 punch than Embiid and Jimmy Butler were together. Harden is not the two-way guy Butler is (or even Simmons is), but he is an elite offense all by himself. The rest you can figure out later.

The issue? The Sixers are a somewhat tricky trade partner for Harden, save for a scenario where they're willing to trade one of Embiid or Ben Simmons for him.

If the Rockets are moving on from one or both of Harden/Westbrook, odds are they're preparing to rebuild and cut costs in the short-term. That makes pieces like Tobias Harris and Al Horford non-starters in deals, not that you were going to be able to complete a deal for a freaking MVP with your misfit toys anyway. On the Brooklyn side of the equation, they have more interesting young guys to dangle — Spencer Dinwiddie, Caris LeVert, and Jarrett Allen, players who can keep growing and aren't weighed down by insane contracts.

Giving up one of Philadelphia's two young stars would be a tough pill to swallow, if we assume that's what it would take to get it done. Their window to contend, insofar as they have one, would shrink. But that's sort of the rub right now — they don't really have one as presently constructed. They are in need of some franchise-altering moves to get to that place, or at the very least a massive step forward from one or both of Embiid and Simmons, and it's going to be difficult to do so under the current circumstances.

We're about to find out just how badly Morey and the Sixers want Harden, and just how stubborn the Rockets are about holding onto him. But at the pace we're moving right now, it seems more likely by the day he could be on the move, and even that he could eventually end up in the City of Brotherly love.