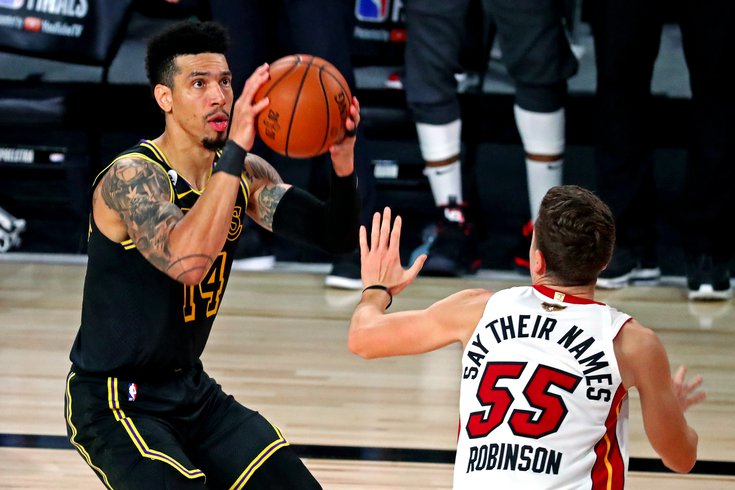 The Lakers Los Angeles Lakers sent Danny Green to the Thunder in a previous trade this week. Now, he's joining the Sixers.

The Sixers are trading Al Horford and a 2025 first-round pick to the Oklahoma City Thunder for Danny Green and Terrance Ferguson, a source confirmed to PhillyVoice on Wednesday night. ESPN's Adrian Wojnarowski was the first to report the deal.

The protection on the 2025 first-round pick sent to Oklahoma City is protected from 1-6, a source told PhillyVoice. Rich Hofmann of The Athletic reports that if it doesn't convey, the pick will be protected 1-4 in the 2026 and 2027 drafts, and will become a second-round pick in 2027 if it does not convey by then.

A year and change removed from making Horford a $100+ million man, the Sixers have moved on from a big man who did not fit in either the short or long-term plans for Philadelphia. In spite of playing for their most hated rival over the previous years, Horford somehow managed to generate even more animosity from Philly fans by actually playing for the team.

While many fans will be happy just to be rid of Horford, it's a decent-sized price to pay just to get rid of a guy they thought would help strengthen the team as recently as last offseason. Perhaps that underscores how big of a failure it was by the previous regime, and how important it was to get someone like Morey in here to clean up the situation.

There's a strong argument this was Philadelphia's most important move to make of of the offseason. Dumping Horford allows them to slide Tobias Harris up to the four spot, where he has been considerably better during his NBA career, creating a knock-on effect down the lineup that will foster additional spacing (not to mention a more coherent lineup and rotation) around center Joel Embiid, who was noticeably unhappy about the arrangement last season. If nothing else, this is a move that will placate the big guy.

In return, the Sixers also get Danny Green, a snug fit at two-guard who has now won titles with three different franchises after capturing a championship with the Lakers this season. Green has been an excellent spot-up shooter throughout his career — though his shot evaded him during L.A.'s recent title run — but he's sneakily a huge pick-up for Philadelphia on the defensive end.

Green is a smart, consistent team defender with excellent instincts and effort, and he was a big part of a great defensive unit for the Lakers last season, not to mention the Toronto Raptors team that won a title the year prior. And with an expiring deal, Green will be off of the books as of next summer, freeing up some room for the Sixers to spend pending other developments. This is very much a, "Nice trade, who'd they get?" situation because of the additional context, but recouping a rock-solid vet in return is a nice development.

And on the Sixers' end of things, the Green component matters a good deal. The veteran shooter is accustomed to playing on the big stage and has a winning pedigree, and the Sixers like that he's used to playing with and fitting in around star players. Philadelphia's brain trust sees him as a great addition to the team on and off the court, a combination of character, experience, and production.

Ferguson is more of a wild card, which is a charitable way of saying he hasn't turned into much yet. A good athlete who is mostly a straight-line driver, Ferguson has exactly one above-average season shooting the ball during three years in the league, a 36.6 mark during the 2018-19 season. He's probably still worth taking a flier on at age 22, but he's certainly not the centerpiece of the deal.

There are lingering questions following the completion of the deal, namely if it puts Philadelphia in the market for a big man on draft night or in free agency. As of right now, the Sixers are looking at a situation where they could be turning to Norvel Pelle to fill the shoes of Embiid when he hits the bench.

We'll bring you more as it comes in.