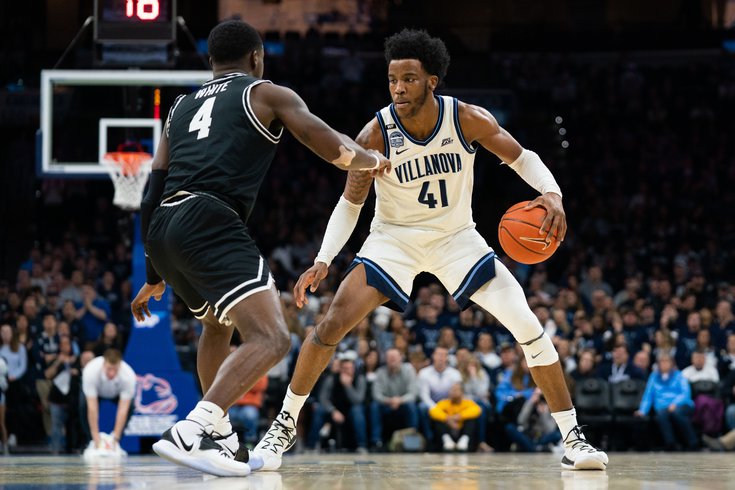 Villanova Wildcats forward Saddiq Bey could be an option if the Sixers want to trade up in the first round.

By now, you know the names the Sixers are in play for at No. 21 in the 2020 NBA Draft. From Tyrell Terry to Desmond Bane, you have studied every shooter and every guard who figures to be on the board, and are likely ready to get mad when the Sixers don't take "your guy" on Wednesday night.

So what happens if the Sixers don't stand pat at No. 21? There hasn't been much to suggest they're working on a move in either direction, but preparation is the heart of a good draft night. You never know when someone could begin sliding down the board, and good management teams are always willing to strike. Conversely, they're also ready to pick up extra chips when the board is not to their liking.

That being the case, a few candidates for you and the Sixers to consider should they decide to make moves on draft night.

Lewis' speed is one of the best traits any player has in this class. He's a devastating transition player who can turn turnovers into points in a hurry, and scouts saw a big jump from Lewis as a halfcourt threat between his freshman and sophomore years of college. With the Sixers expected to play a lot more pick-and-roll under Doc Rivers, Lewis is the sort of player who will absolutely eat bigs alive on switches, and he has shown promise as a catch-and-shoot player, an important trait for a guy who would be playing off of Joel Embiid and Ben Simmons.

One problem — Lewis’ ability to get to the rim outstrips his ability to finish there. He was more promising than productive as a shooter in the SEC, so there might be some growing pains as he adjusts to the deeper three-point line, putting more pressure on him to succeed as an at-the-rim player in the interim.

But I'm bullish on Lewis. With additional bulk and shooting refinement, he can be a really dangerous offensive player. Even if his finishing remains iffy he will put pressure on the rim and create space for Philadelphia's shooters, insofar as they have any. Putting speed at the lead playmaker position for 48 minutes is an idea that intrigues me a lot.

There's no overvaluing of "Philly guys" or local players for this author — Bey is the prototypical three-and-D player teams are looking for in today's NBA. He shot the hell out of the ball during his sophomore year at Villanova, making 45.1 percent of his looks with clean mechanics and a pretty high volume of catch-and-shoot attempts. Like many of Jay Wright's players, he just has the look and feel of a pro, playing under control and within scheme on both ends of the floor. Adding another two-way wing would afford the Sixers more lineup flexibility, particularly if they move Al Horford or slide him into a permanent backup role (perhaps that's wishful thinking).

Bey does have some weaknesses, namely that he projects as a true role player rather than an upside candidate. If you're going to trade up in a bad draft, it should be to get someone who can do things guys in your current range aren't capable of. I'm not sure that's the case with Bey when guys like Desmond Bane (admittedly older and smaller) should be on the board at No. 21.

Still, Bey strikes me as a guy who will fit in just fine at the next level, and his switchability should allow him to play a part in what should be an elite defensive group.

Maxey's ability to get to and finish at the rim is a big point of separation between the Kentucky guard and most other guards in this class. Using excellent body control, he's able to contort his body in mid-air and finish over or around big men, a skill that will serve him well against the bigger, more athletic competition in the pros. He's a two-way player who could separate himself from a lot of second-unit guards by offering Philadelphia something on both ends of the floor long-term.

It's also worth considering the number of Kentucky players who have ended up being a good bit better than they were able to show at the college level. From Devin Booker to Shai Gilgeous-Alexander to Tyler Herro, we're at the point where we might have to give guards a bump in draft stock compared to what we think we know.

On the other hand, you're doing a lot of projecting on Maxey, who shot just 29.2 percent on threes during his lone college season. I think that undersells his shooting ability — he was a good free-throw shooter in college and was plenty willing to pull-up and fire — but that's always a concern with this roster.

According to quite a few scouts, Riller is probably the best finisher among guards in the draft, with all due respect to Maxey. Riller had a down year at the rim as a senior and still made over 63 percent of his looks at the rim on halfcourt possessions, down from an outrageous 74.2 percent his junior year. With a tight handle, great footwork, and very good touch, Riller is able to read where defenders are headed and get himself to whatever opening they left behind. If you believe in his shot translating, the makings of a high-level scorer at the next level are there.

Riller was a poor defender in a small college conference, which suggests things are going to get worse for him at the next level. I think the Sixers, assuming they still have Joel Embiid and Ben Simmons on the roster, would benefit from his offensive contributions more than they'd suffer due to his defense. But it's not out of the question that the jump in competition would mute his strengths, leaving him in a tough place.

Flynn is one of the best pick-and-roll players this class has to offer, and he separates himself from other guards in the class by way of feel as both a scorer and a passer, with Flynn seamlessly toggling between setup and attack modes depending on what the defense has given him. Out of the pick-and-roll, he can make pocket passes, lobbed entries to bigs, hit a shooter with a wrap pass, and is generally adept at using what the defense is showing against them. He's quite good at hiding his intent during any given possession, waiting until the last second to turn his head in the direction of the guy he's looking for.

Size concerns put a cap on his ceiling and threaten to take him from very good college defender to subpar pro defender, but he should be smart enough to eventually grade out as a solid team defender.

I know what you're thinking. Another center for the Sixers? A lot of people would rather walk straight into the Schuykill on a 40-degree day than see Philly pick up another big man. Drafting Tillman would be contingent on finding a deal to move Al Horford for a better-fitting piece (a la Buddy Hield) because there simply isn't enough room on this roster for more bigs.

But Tillman was an absolute ass-kicker at the college level, and he's a guy I think you can expect to play fairly high-level defense right away. Philadelphia still hasn't solved the problem of everything falling off of a cliff when Embiid hits the bench, and Tillman — a high IQ, ultra-strong defender under Tom Izzo — has all the makings of a guy who can make a team better through smarts alone. He'll do all the little things right at the next level, from screening to short-roll passing.

Unfortunately, he sort of has to do the little things right, because he'll be undersized for a big man and have issues against a lot of the league's vertical threats coming down the lane. But if some of the best guard candidates are off the board, it wouldn't hurt to get a high character big deep in the first round.