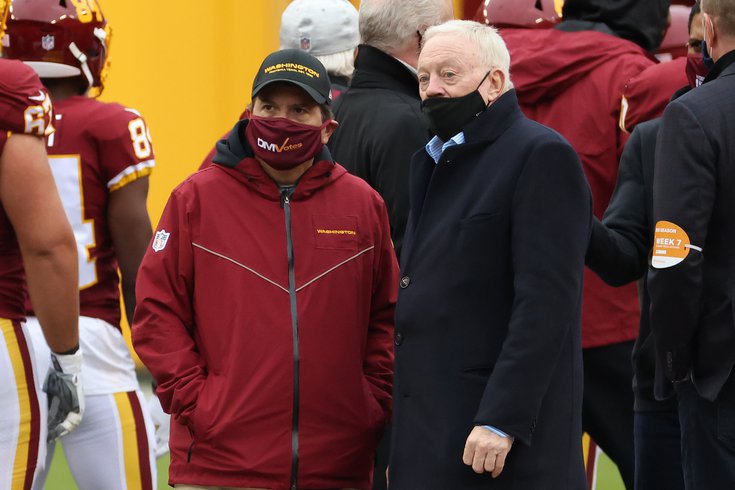 One of these guys' Thanksgivings will be ruined today, which is something we can all be thankful for.

For the gambling enthusiasts, here are my Week 12 NFL picks. To note, the team logos indicate who I think will win the game, not cover the spread. At the end of the picks, I'll note a few teams that I like based on the spread. All the below spreads are courtesy of the consensus Week 12 odds at TheLines.com.

Texans (-3) at Lions: The four teams playing on Thanksgiving have a combined record of 13-27 and a combined point differential of -215. Woooo! Somehow, this trash Lions team has the best record of the four, at 4-6, and there's a decent chance Matt Patricia could be fired if they lose. The Texans have at least been respectable of late, so we'll take them here, I guess.

As is my yearly tradition, I would also like to quickly complain that it is dumb to keep trotting out the Lions every Thanksgiving, when they've been so reliably awful for decades. It's a tradition that nobody outside of Detroit cares about, even a little bit.

Football Team at Cowboys (-3): The Eagles have led the NFC East ever since they beat the 49ers Week 4. As long as the Football Team and Cowboys don't tie, whoever wins this game will overtake the Birds in first place on percentage points.

The Cowboys had a mildly impressive win on the road over the Vikings last Sunday, and they are clearly more talented than the Football Team, even if the Football Team made easy work of them earlier this season. Thanksgiving feels empty without shots of an angry Jerry Jones in the owners box, but I don't think we'll see that this year.

Raiders (-3) at Falcons: Are the Raiders good now? I think so! Conversely, I know the Falcons are bad. #Analysis.

Chargers at Bills (-5.5): The Chargers will have to travel cross-country to play a 1 p.m. kickoff in chilly Buffalo, where the Bills are coming off of their bye week. The Chargers remain banged up on defense, and Josh Allen should be able to take advantage.

Giants (-6) at Bengals: Joe Burrow is done for the season (and maybe beyond), which obviously really sucks for this snake-bitten Bengals franchise. They'll start Brandon Allen, who had a 1-2 record with Denver in 2019. If the 2-7-1 Bengals played in the NFC East, they'd be right in the hunt! In the AFC North, they've been done for well over a month. Give me the Giants, who have more to play for.

Titans at Colts (-3): A Week 1 loss to the Jaguars has clouded my opinion of the Colts all season long. I need to get over that and realize that this is actually a good team.

Panthers at Vikings (-3.5): The Panthers have allowed 4.6 yards per carry and 14 rushing TDs this season. That's not ideal against a Vikings offense that is going to pound the run all day with Dalvin Cook and Alexander Mattison.

Beyond the actual matchup, this is a survival game for the Vikings. If they lose, they're done. But like done done. I believe they'll stay alive a little while longer.

The Patri*ts aren't good anymore. That's their new reality. This line is only 2.5 points because it takes a while to folks to recalibrate their thinking on teams that are good for a long time but become bad, or vice versa.

Dolphins (-6.5) at Jets: So the Dolphins are rolling with Tua Tagovailoa at quarterback with impressive wins over the Rams, Cardinals, and Chargers, and the kid has a shaky outing in Denver, so you bench him in the fourth quarter instead of giving him a chance to rally his team? Brian Flores has otherwise done a really nice job turning this franchise around, but I'm sorry, that's stupid.

Browns (-6.5) at Jaguars: My opinion of the Browns has fluctuated all season. Most recently, I was thoroughly unimpressed with them last Sunday against the Eagles, and think they're going to be easy pickings in the first round of the playoffs. They should handle the Jags though, obviously.

Ravens at Steelers (-4): This game got moved from Thanksgiving night to Sunday, because of COVID concerns in the Ravens' organization. To be determined if it even happens on Sunday.

Saints (-6) at Broncos: This matchup is the second leg of the Saints' four-game stretch against bad teams while Drew Brees is out:

49ers at Rams (-6.5): The Niners' season has fallen apart, as they have lost three straight games by double-digit points. If I'm Kyle Shanahan, and I know that I have all kinds of job security, I'm going full-on tank mode.

Chiefs (-3.5) at Buccaneers: The ring count between Tom Brady and Patrick Mahomes might be 5-2 instead of 6-1 if Dee Ford hadn't jumped offsides in the 2018 AFC Championship Game. Brady isn't (and never was) as good as Mahomes is right now.

Bears at Packers (-8.5): Even if it was predictable that the Bears' early success this season was a mirage, this is still noteworthy:

Fun fact: Four weeks ago the Bears were the top seed in the NFC.

On a side note, if we're naming teams whose long-term outlook is worse off than the Eagles' (there aren't many), I would include the Bears.

Seahawks (-5) at Eagles: Usually, by the time we make picks here, we've already published our "five matchups to watch," and other game-related articles, like injury updates and such. We haven't done that this week, because really, who cares? The Eagles are a very bad football team that continues to play worse and worse as the season progresses, and there are no realistic signs that things are going to turn around anytime soon.

The Seahawks, meanwhile, have played wild, down-to-the-wire games all season long, but I doubt that even they can find a way to make a game that involves the Eagles entertaining.

Give me the Seahawks to continue to own the Eagles, and sure, I'll gladly lay the 5.