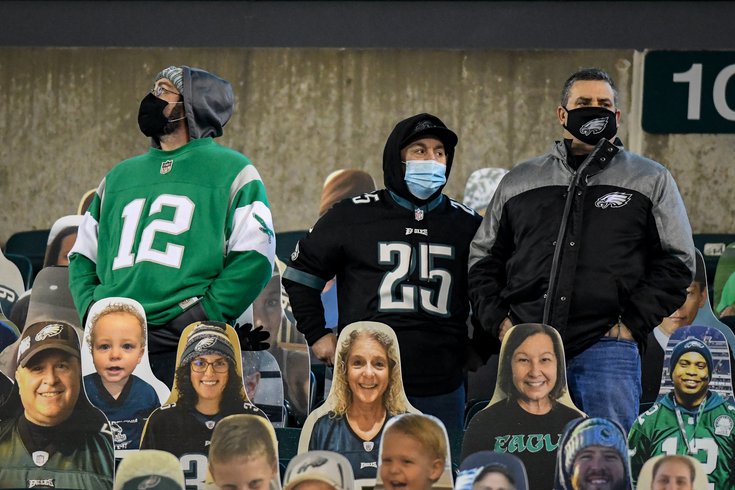 Fans in the stands during the Philadelphia Eagles game against the Dallas Cowboys at Lincoln Financial Field in Philadelphia on November 1, 2020.

It's utterly ridiculous that this article is still relevant with the Eagles sitting at 3-6-1 right now.

But they are still, technically until Thursday, in first place in the NFC East, and for anyone with any kind of confidence in a turnaround (and if you have confidence, please reach out and tell us why...) there are several interesting season long prop bets worth examining surrounding the team as it prepares for Week 12 against the hated Seahawks.

And while the team as a whole is disappointing, the individual accolades are even worse, as the team's star players have played like anything but. The common theme around the top bets we're about to break down is they they are mostly "technically still possible." Not likely, or even probable — but that's where we are in 2020.

And so, let's take a look at the latest future odds and player props from TheLines.com, from postseason chances to award winners and season stats as the Eagles look to surprise everyone, beat Seattle, and reclaim first place come Monday.

Really all you need to know for this section is that the NFC East is a combined 12-27-1, and they've been out-scored this season by 185 total points.

After starting the season just behind Dallas for the best odds to win the division, they jumped into first place after a slow start and continue to hold onto it, though as you can see below, their odds have decreased considerably as all three NFC East teams now have exactly three wins.

Just how sports books can justify saying that there are 16 teams worse than the Eagles, with regard to odds of winning the Super Bowl is astounding for anyone who has watched the Birds play the last few weeks.

Here's how they've been trending...

At the beginning of the year, we had Carson Wentz's MVP odds listed here and it was a reasonable expectation that he would at least stay in the race for a large part of the regular season. His odds have plummeted every single game, and for the first time this year, at least at TheLines.com, Wentz is finally off the board. Two weeks ago his chances were +15000. And now, after his horrible performance against the Browns, he's been deemed statistically too bad to win the MVP. Took long enough...

We also previously looked at Jalen Reagor's odds for Offensive Rookie of the Year, which opened at +2800 according to TheLines.com. But the Eagles placed him on IR on a few weeks ago after he injured his thumb against the Rams back in Week 2. He's returned and scored a touchdown against the Cowboys and was also a regular target of Wentz in Weeks 10 and 11, but the ROY race is now likely Justin Herbert's to lose.

[Note: For comparative purposes on the percentages, the Eagles are currently 62.5% of the way through their season, so if a player is above that, they're on pace to exceed their total.]

Sanders is behind pace, obviously, but he is still in the mix to reach this preseason goal. He needs to compile 675 yards of offense, running and receiving, and he has six games to do it — which would be just over a 110 yards per game pace. With the lackluster defenses of the Seahawks and Cowboys still on the schedule, there could be a breakthrough performance or two left this year.

Wentz threw two touchdown passes in Week 11 (but also two interceptions — he has 14 of those as well). He leads the NFL in turnovers and has been the worst starter in football, statistically and there's a chance Philadelphia may decide to give Jalen Hurts a look at quarterback. Which means Wentz is reaching do-or-die territory. He needs to throw 14 touchdown passes in six games (2.3 per game) to eclipse his preseason over/under, which is a task Wentz, in his former iterations would surely be up for, but the 2020 version of Wentz has been far from confidence inspiring.

Reagor has an outside chance of reaching this milestone despite having missed five games this season. He will need to stay completely healthy and haul in at least 73 yards per game for the rest of the way. The opportunity is there, but he's yet to put it together as a go-to receiver for Wentz yet.

Ertz has been designated to return from the IR and could be back in practice sometime very soon. If he is able to appear in the Eagles final six games, he could potentially become a red zone workhorse and haul in a touchdown in each game — but it's probably not likely as he was far from impressive when he was healthy earlier this season.

The Eagles have six games left, and even if they somehow beat the Seahawks, Packers, Saints and Cardinals — as well as division foes in Dallas and Washington — they'd still be 9-6-1. That's the under. This one is a loser.