Eagles RT Lane Johnson announces that his season is over 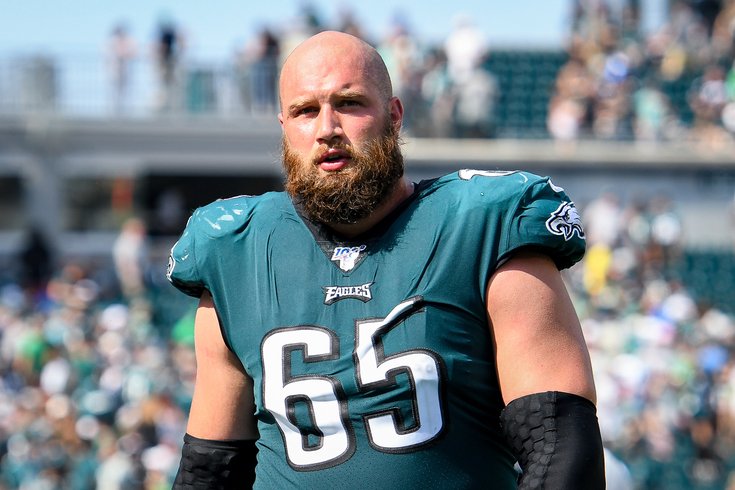 Lane Johnson announced during his Zoom call with Philadelphia reporters on Friday that the inside of his ankle has "collapsed," he'll need surgery, and his 2020 season is over.

"It’s been difficult trying to play at a high level, really the anxiety of the whole process," he said. "It’s part of the game. It’s something I knew I’d struggle with throughout the year. It hadn’t improved much, so with the outlook of my season, it’s done. Probably be a 4-month recovery, 5-month recovery.

"Essentially from all the high-ankle sprains, and damage I’ve had done to my ankle, it’s really repairing the deltoid ligament. The inside of my ankle has collapsed. So a lot of my power and push-off that I normally have isn’t there. That’s where I’m at. Early in the year, I’ve had some difficulties with kind of a stress fracture was forming from the tightrope surgery. That was kind of ongoing.

• 2018: He originally injured his ankle in the Eagles' win over the Jacksonville Jaguars in London. He was out two weeks (the Eagles' ensuing bye, and one game), and he was right back in the lineup thereafter.

• 2019: He missed four games with a related ankle injury.

• 2020: It was reported that Johnson had surgery on his ankle in August, after which the team listed him as "day-to-day." Johnson made the trip to Landover Week 1 against the Football Team (by contrast, Miles Sanders stayed in Philly), and tried to give it a go, but could not play. He returned to action Week 2 against the Rams. Johnson later also missed the team's Week 6 game against the Ravens, and their Week 8 game against the Cowboys. Prior to the Cowboys matchup, Johnson did not appear on the injury list, and he was expected to play. On Saturday before the game, the team ruled him out.

"How all of this took place is when I got fell on in Jacksonville a couple years ago (London game), and then Giants last year," Johnson said. "Those two injuries kind of snowballed into this. And the tightrope (fused the two bones together). The deltoid ligament is the inside of your ankle. So a lot of that damage caused it to loosen it up, and you lose a lot of strength.

"As far as pushing off and things that you’re normally able to do, the (strength) isn’t what it is in the right leg. That’s where I’m at, so it’s been damaged for some time. You’re trying to go through it as much as I could. I kind of knew this was going to be a difficult process trying to play. Like I said, we were making really good progress at times, and football is football, it is what it is, and things happen. That’s where I’m at."

Johnson said that he does not believe his injury was mismanaged.

"I feel as far as all the decisions made, it was my decision," Johnson said. "I wanted to come back and play. It is what it is. As far as rehab, we have done everything we could. There were times we were making a lot of really good progress and there were some games where rolled up again. It’s something you can’t control. It’s been frustrating, but I just want to get back to 100 percent and not think about it, play ball and move on from there, which has been difficult for me this year."

While Johnson said it was his decision, perhaps it shouldn't have been.

With Jack Driscoll also having suffered an injury Week 11 against the Browns, Johnson's likely replacement at RT will be Matt Pryor. The Eagles were already going to have their tenth OL combination in 11 games with a report that Jordan Mailata would be starting at LT, and Jason Peters would be sliding over to RG.

Let's go ahead and update those OL combinations:

More alarming than this season, however, is Johnson's future. When healthy, he is one of the best offensive tackles in the NFL. He was even still good playing on a hobbled ankle.

Lane Johnson, despite being extremely hobbled, has given up a pressure on only 2.5% of his snaps in pass pro (per PFF)..

But will his ankle ever be right again?

"It is a big question," Johnson said. "I could tell you I’m more coming June or July, so when you’re ramping up. My goal is to put this behind to where it’s nothing I have to think about. I don’t want to be thinking about for games or during the week if I can practice, how I’m feeling. I’ve seen guys come back from far worse.

"You’ve seen Brooks come back from tearing an Achilles. He was the best guard in the league the next year. So, if I need any inspiration or guys to look to around here to people who have gone through things in the past and recover, there’s guys here in the locker room to look up to."