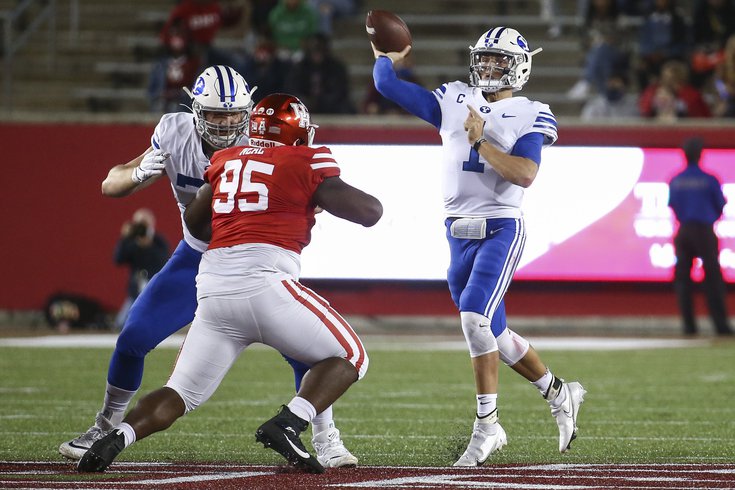 While the Eagles are unlikely to take a quarterback (like BYU's Zach Wilson, above) early in the 2021 NFL Draft, it should at least be considered.

Campbell is sort of the wildcard in this cornerback group. He has coveted length and rare athleticism, and is likely going to be a player who stands out at the Combine. However, the results on the field haven't always matched his impressive size and athletic measurables, and there are concerns about his technique and consistency.

In three years after enrolling at Georgia as a five-star recruit, Campbell only has 1 INT and 9 PBUs in 29 career games. His first career college INT came in his 29th game, a couple weeks ago against South Carolina. It should be noted that Campbell has played against his share of outstanding college receivers. For example, here he is against Alabama. (The results aren't great.)

Campbell would benefit from landing with a team with a good defensive backs coach. If they can get him to maximize his potential, he could be really good. Some believe he's a first round pick. No way. You can't take a guy Round 1 who has one career pick and nine pass breakups, especially when other offenses weren't actively avoiding throwing at him. But he is an intriguing boom or bust type who could make sense for someone on Day 2.

Williams is a stout back at 5'10, 220, with good vision to pick his way through holes, ability to break tackles, a little bit of a nasty streak, and enough juice to make things happen in open space when he gets into the clear. He has had a good 2020 season, and has helped his 2021 draft stock. His numbers:

Williams has scored a TD on every 8.4 carries this season.

He would be an ideal complement to Miles Sanders. I think he would make sense early in Round 3.

Marshall was the third receiver in the pecking order at LSU behind Ja'Marr Chase and Justin Jefferson in LSU's offense during their championship run in 2019, but he was still productive in his own right, catching 13 touchdowns as a sophomore.

In 2020, with Jefferson off to the NFL and Chase opting out for the season, Marshall had a chance to shine, which he did, catching 48 passes for 731 yards (15.2 YPC) and 10 TDs in 7 games. He was averaging about 7 catches for 104 yards and 1.4 TDs per game, when he too decided to opt out for the rest of the season to prepare for the NFL draft.

He is a big, strong receiver with good speed for a guy his size who can beat press coverage, win contested catches, and operate both from the outside and in the slot. He also has very good hands, and rarely drops passes.

Marshall will probably go Round 1, but if he slips into the second round, he would be a clear player to consider with an early Round 2 pick.

Back in 2016, when it was a near certainty that the Eagles would be drafting a quarterback at some point, we dedicated articles to each individual quarterback prospect. For example, it was fun going back in time and looking at what I wrote about guys like Carson Wentz, Dak Prescott, and Christian Hackenberg (lol) back in the day. I was particularly pleased with myself on that Hackenberg evaluation. 😉

Anyway, we won't be going super in-depth on the quarterbacks in this draft, for now. But with Carson Wentz benched, the possibility of the Eagles taking a quarterback with a top 5 overall pick cannot be completely dismissed. The clear top quarterback prospect is Trevor Lawrence, who is highly likely to be drafted by the Jets, or even the Jags if Jacksonville ends up with the No. 1 overall pick.

Beyond Lawrence, quarterbacks like Ohio State's Justin Fields, BYU's Zach Wilson, and North Dakota State's Trey Lance will be jockeying for position in the 2021 NFL Draft. And so, it's at least worth knowing a little bit about each guy.

In 2020, Wilson is completing 73 percent of his passes, he has a 27:3 TD:INT ratio, and he's averaging 11.1 yards per attempt. He doesn't have elite arm strength by any stretch, but he is accurate, athletic, he avoids pressure, and he consistently makes off-schedule plays.

We may dig in more on the quarterbacks at some point during the offseason if it's looking more like the Eagles will (or should) be in the market for one, but Wilson will likely go top 10 in the draft, and possibly much higher.

Sanders is a speed rusher who is explosive at the snap, and has a relentless motor, but comes with concerns about his ability hold up at the point of attack against the run. I like him a lot as a rotational pass rush specialist prospect.

With Brandon Graham, Derek Barnett, and Josh Sweat in place, Sanders would make a lot of sense at a fourth DE to replace Vinny Curry. I think he's an early Day 3 guy if he comes out.