A look ahead to the 2016 quarterback class: Dak Prescott edition 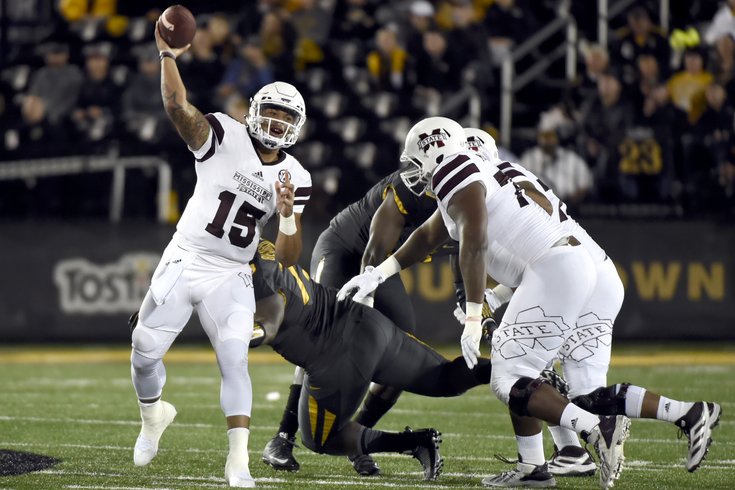 Dak Prescott reminds me (and a lot of other people) in some ways of Tim Tebow.

Earlier this week, we wrote that Chip Kelly dropped a hint about Sam Bradford's future with the team. In our view, it appears as though Kelly believes Bradford will be better with the Eagles in his second year with the team, should he sign a contract extension.

"In terms of where we are as an offense with a lot of these guys, it's kind of like there was a movie being shown and (Bradford) showed up halfway through it," said Kelly. "And then he's supposed to figure out what's going on and what happened in the first half of the movie because he hasn't been with us for the amount of time that Celek has been here and some of the other guys, like Kelce, have been here. It's something you have to get through reps; it's not something that can be forced."

The potential available quarterback options this offseason are junk, as they usually are, seeing as it's the most important position in sports and teams don't let good ones get away. As we've noted, Colin Kaepernick isn't good, or certainly not so much better than Bradford that you'd want another guy starting midway through the movie again. And then who do you have? Robert Griffin III? Kirk Cousins? Geno Smith? Pass, pass, and pass. And by "pass," I mean the Eagles are unlikely to want those guys, not that those quarterbacks are good at passing.

After the 2013 season, the Eagles seemed to be convinced that Nick Foles was "the guy" after his 29-touchdown, two-interception season. In the 2014 draft, after the Eagles' six desired targets (Anthony Barr, Odell Beckham Jr., Kyle Fuller, C.J. Mosley, Brandon Cooks, and Ha Ha Clinton-Dix) came off the board, they settled on OLB Marcus Smith, a player they did not ideally want to come away with in the first round. They drafted Smith over quarterbacks like Teddy Bridgewater and Derek Carr, both of whom look like they may have bright futures in the NFL. The Eagles wrongly projected Foles as a franchise quarterback and missed the boat on quality quarterback prospects.

Even if the Eagles bring Bradford back, they would be wise not to make the same mistake with Bradford that they made with Foles. If a quarterback they like is available, go ahead and draft him. After all, it's the most important position in sports, and if you don't have one, you have no chance. Better to spend a draft pick on one to hedge your bet than remain in the same seemingly endless cycle many teams go through, where they're always searching for a franchise quarterback.

During the offseason and continuing into the regular season, we started taking a look at some of the quarterbacks eligible to enter for the 2016 NFL Draft. In case you missed those, you can find them here:

Today, we'll take a look at Mississippi State's Dak Prescott, whose numbers so far this season are tremendous. Equally important, in my opinion, is that he has shown steady improvement as his college career has progressed:

Prescott has found the end zone as a runner 38 times in his college career. That is impressive.

However, I watched a couple of Prescott's games (vs LSU and Texas A&M in 2015, both of which were losses), and I don't see a quarterback who is ready to have immediate success at the NFL level. He has a ways to go.

• Prescott's short passing game is very good. On throws within 10 or so yards, he is very accurate, with just the right amount of zip on his passes. He's not firing Donovan McNabb-style lasers that his receivers have to react to like hockey goalies, but at the same time, the ball gets there. In other words, he throws sharp catchable passes from short distances. And he throws a ton of them. If you watch his games (via draftbreakdown.com), the majority of his completions are short passes. He also does a good job of completing those short passes on the run.

• When you see a quarterback with the kind of rushing yards that Prescott has, you often think of a guy who is looking at his first read, and then bailing. That is not the case with Prescott. Most of his rushing yards come on designed runs. When he drops back to pass, Prescott will hang in the pocket and go through his progressions.

• Prescott has a calm demeanor in the pocket. There's no panic. Here's a play against LSU, in which the edge rusher beats the LT. Prescott calmly steps up to avoid him, and completes a pass down the field:

And here's a play where LSU is sending the house on a 3rd and long. Prescott calmly steps back to buy a little time, and gets the ball out to his big receiver at the sticks:

• Above, I mentioned that I don't think I see a quarterback who is ready to have immediate success at the NFL level. The biggest reason why is because (in the games I watched) Prescott was not accurate at all throwing deep and intermediate passes. He's high, he's low, he's left, and he's right, but he's rarely hitting his receivers on the mark.

• There isn't much touch to Prescott's throws when the situation warrants it, and when he attempts touch passes, they can often be ugly. An extreme example is this throw against Texas A&M. To be fair, he's under heavy pressure, buuuuut, ew...

Prescott's fit with the Eagles:

I can see Chip Kelly having interest. This past offseason, he brought in Tim Tebow to challenge for the third quarterback spot, and all indications were that he really wanted Tebow to earn a job. Ultimately, Tebow showed during the preseason games that he couldn't (or didn't want to) throw:

Prescott has a number of the same qualities as Tebow. He is an unquestioned, well-respected leader of his team, and he's a big-bodied guy (6'2, 230) who will try to run defenders over. Unlike Tebow, Prescott is a throw-first quarterback when he drops back to pass, who will go through his reads and make accurate passes as long as you're not asking too much of him.

Whatever it was that Chip Kelly saw in Tebow, my hunch is that he'll see the same in Prescott, and more. I would project Prescott as a Day 3 pick, and if he's there to be had, I could see Kelly pulling the trigger.