Five matchups to watch Sunday between the Eagles and Dolphins 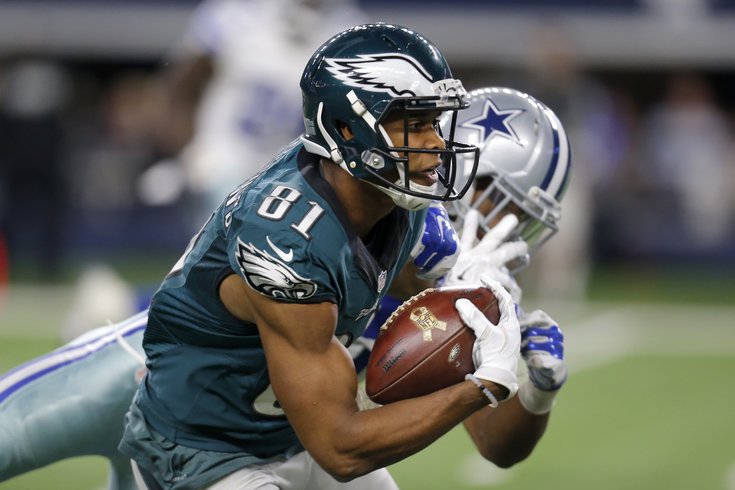 Jordan Matthews needs to capitalize if the Dolphins try to cover him with a shrimpy corner.

The 4-4 Philadelphia Eagles will play the 3-5 Miami Dolphins this Sunday in Philly, and the Eagles will have a chance to build on their most important win of the season. Here are five matchups to watch.

A week ago, the Eagles struggled to cover Cowboys slot receiver Cole Beasley, who went off for 9 catches, 112 yards, and 2 TDs. The Dolphins' best weapon in their passing game is second-year player Jarvis Landry, who often sets up shop in the slot.

"They move him around because he's a versatile player," said Chip Kelly, "but where he is primarily most dangerous, I think, is in the slot."

Per Kelly, the Eagles were high on Landry in the 2014 NFL Draft, which makes sense, as Landry is also a very good special teams player, he gets yards after the catch in the passing game, and he's a great blocker.

"I think he's an outstanding receiver and he has done a really nice job, catches the ball extremely well," said Kelly. "He's a dynamic returner as well. He does a terrific job of punt returns for them, but we were high on him also." Here's a sampling of the kind of hands Landry has:

Malcolm Jenkins suffered a concussion against the Cowboys last week, but early indications are that he will play on Sunday. Jenkins, Walter Thurmond, and E.J. Biggers will be studying No. 14 hard this week.

2) The Dolphins' corners vs Jordan Matthews

Yes, another slot receiver matchup to watch. Jordan Matthews had his best game of the season against the Cowboys last Sunday night, when he hauled in 9 catches for 133 yards, and of course, this:

Matthews is 6'3, and in the past, has feasted on smaller slot corners. Some teams care more than others about their cornerbacks' height. The Dolphins apparently do not, as their corners are shrimpy:

The Dolphins' primary slot corner is the 5'9 Brice McCain. I'd be surprised if the Eagles didn't like height matchup advantage Matthews will have over Miami's corners.

3) The Eagles rush defense vs the Dolphins rushing attack

However, when the Dolphins have run this season, they have been very effective. They run for 4.9 yards per carry, which is second-best in the NFL.

So far this season, the Eagles have been outscored 40-10 in the first quarter of games. The Eagles cannot allow the Dolphins to jump out to an early lead like so many other teams have against them this season. The quicker you can make Miami one-dimensional, the more feeble they become offensively.

4) The Eagles pass rush vs the Dolphins' OL

The Dolphins have given up 23 sacks this season. That is the eighth-most in the NFL. They've given up 56 quarterback hits. That's seventh-most. The only team the Eagles have faced this season in the top half of the league in sacks allowed is the Saints, and the Eagles were able to sack Drew Brees five times. The Eagles' matchup against the Dolphins will be their best opportunity of the season to get after the quarterback, to date.

I'll keep this short and sweet. Ndamukong Suh has the ability to wreck a game. With stud pass rusher Cameron Wake out for the season, the Eagles would be wise allocate extra resources to the interior of the offensive line and give Tobin some help.