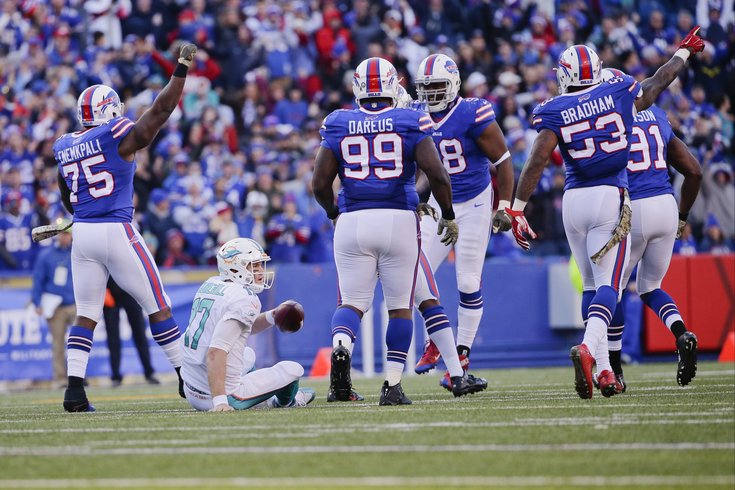 For the gambling degenerates, here are my Week 10 picks. To note, the helmets indicate who I think will win the game, not cover the spread. At the end of the picks, I'll note a few teams that I like based on the spread.

Bills at Jets (-2.5): Ah, Rex Ryan makes his return to New Jersey to face his old team, the Jets, in a story-line that nobody outside of New York or New Jersey cares about even a little. The Bills are 4-2 with Tyrod Taylor at quarterback, and they are a noticeably better team with him in there, but I like the Jets' defense's chances of forcing him into bad throws and winning on turnovers.

Lions at Packers (-12): The Packers are coming off three games in which they were out-gained 1,475-912, and have looked nothing like the NFC juggernaut many of us thought they were a few weeks ago:

However, they should be able to get back on track in the friendly confines of Lambeau against the worst team in the conference.

Cowboys at Buccaneers (-1): Before the season began, when the NFL released the regular season schedule, this was a game I'm sure 100 percent of Cowboys fans chalked up as an easy W. Now they head into Tampa a one-point underdog. LOL. The Cowboys have become a five-alarm dumpster fire, and their signing of Greg Hardy has blown up in their faces. Still, they have to win a game eventually, right? I mean... Right?

On a side note, for the Cowboys fans who think this season went in the toilet because Tony Romo got hurt, please note that other teams have managed to stay afloat and win games with their backups this season. Backup QB records so far in 2015:

*Cassel actually "won" a game with the Bills this season. He took the first snap of the game and handed off to LeSean McCoy, who lost six yards on the play. Cassel then exited the game and did not re-appear. The Bills went on to win, so Cassel gets credit statistically for the win, but for the purposes of common sense, I did not include it above.

Panthers (-5.5) at Titans: The Panthers are coming off four straight weeks of impressive wins against the Seahawks, Eagles, Colts, and Packers. Their trip to Tennessee has all the makings of a trap game, so I wouldn't touch this seemingly low 5.5-point spread with a 10-foot pole, especially with the Titans getting the "new coach bump" last week in New Orleans.

Saints (-1.5) at Redskins: Bleh... Who knows? And really, who cares? The Saints were coming off three straight wins, getting themselves back to playoff contention at 4-4, and then they lose... at home... to the Titans? Awful. Saints opponents have allowed a passer rating of 112.0 this season, which is on pace to be the worst in NFL history. The Redskins have actually been a decent home team this year. They're 3-1 at FedEx, and they dominated the Dolphins in that one loss. Maybe DeSean Jackson can finally do something this week.

Dolphins at Eagles (-7): The Dolphins have a pair of wins against two horrible AFC South teams in the Titans and Texans, as well as a Week 1 win over the Redskins in which they were thoroughly outplayed. In their five losses, which includes a loss to the horrendous Jaguars, they were outscored 160-62. This is not a good football team. I like the Eagles to roll here, and for Swoop to get revenge on Ace Ventura:

Browns at Steelers (-4.5): The Browns have been quietly horrendous this season. They have the second worst record in the NFL at 2-7, and they have the third worst point differential in the NFL. The bottom five in that category:

That 4.5-point spread seems insanely low. What do you know, Vegas? Whatever, I don't care. I'll bite.

Jaguars at Ravens (-6): The Ravens have forced just four turnovers this season. Somehow they haven't forced a turnover in their last five games. I'm not really sure how that's possible. Only five teams have turned the ball over more than the Jaguars, who extended their road losing streak to 13 games last week:

Just bet against the Jags on the road until further notice.

Vikings at Raiders (-3): I'll be honest -- These are two teams I haven't seen much of, but I hear the Raiders are good now. Both teams feature quarterbacks that the Eagles could have selected in the 2014 NFL Draft in Teddy Bridgewater and Derek Carr, but wrongfully thought of Nick Foles as "the guy," and drafted bust OLB Marcus Smith instead.

Patri*ts (-7.5) at Giants: Yeah, yeah, the Giants always beat the Patri*ts when they're not supposed to. Of course, they typically have a pass rush when they do. This year, not so much. The Patri*ts' scheduled beatings of NFC East teams will continue this weekend, when they get a small measure of revenge on the Giants in New Jersey. The Patri*ts buried the Cowboys and Redskins in Weeks 5 and 9, respectively. The Giants and Eagles will get their turns Weeks 10 and 13.

Chiefs at Broncos (-7): After losing five straight games (and Jamaal Charles) for the season, the Chiefs looked dead at 1-5 a couple weeks ago. Over the last two weeks they beat an OK Steelers team by 10 and blew out the Lions 45-10. This game is their season. If they can upset the Broncos in in Denver, they'd put themselves in a position where a wildcard berth wouldn't be out of reach. Meanwhile, the Broncos are 7-1, but they've only beaten two teams by more than seven points this season. Take the Broncos to eke out a win, but the Chiefs to cover the TD spread.

Cardinals at Seahawks (-3): This is a great Sunday night game, with a ton at stake. If the Cardinals can go into Seattle and beat them, they'll be nearly impossible to catch in the NFC West. If the Hawks can take care of business at home, there will be just a a one-game gap between them. I'm taking the Seahawks, for no other reason than that it's more interesting that way. I'm predicting weird officiating.

Texans at Bengals (-10.5): The three teams the Texans have beaten this season: The Buccaneers, Jaguars, and Titans. Bleh. The Texans beat the Bengals two consecutive years in the playoffs in 2011 and 2012, when Andy Dalton had the following stat lines:

Dalton will get some revenge Monday night against a bad Texans team.