Checking in on the Eagles' season over/unders, part one 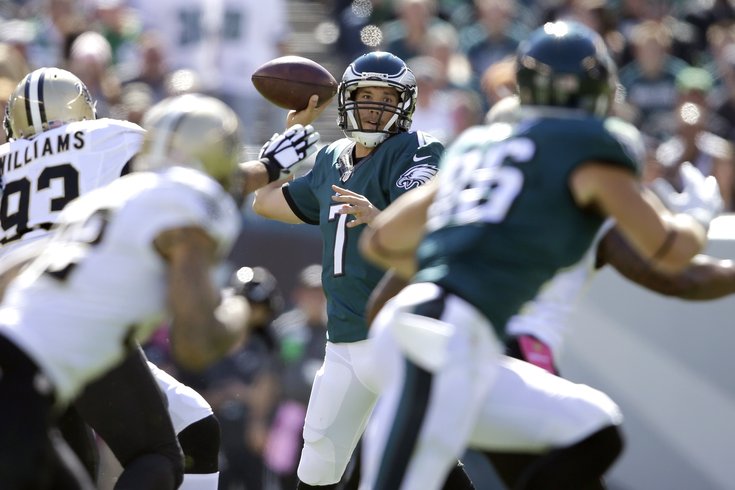 Sam Bradford looks to pass during the Eagles' 39-17 win over the Saints.

Each week, I put together a list of five over/unders for the upcoming Eagles game. It's mainly just a different way of listing some things to keep an eye on and what I'm expecting to see in those areas on Sunday.

And prior to the season, I tried to predict some of the stats for the 2015 Eagles -- 10 to be exact. This may come as a huge surprise to those who have read my over/under posts before, but I didn't do so well with my predictions. It was so bad that I decided to break it into two posts so that I can try to defend myself and shift all the blame to the Eagles, or anyone else I can find.

Here are the first five over/unders -- as well as what I said back in August and what they're on pace for as the Eagles hit the midpoint of their season:

“There are far too many variables for me to comfortably say Bradford will start 14 or more games. Do I think it's possible? Of course. Probable? Still, yes. Would I put money on it? No way.”

I don’t regret this one at all, although I’m fairly certain I’ll be wrong. I mean, have you looked around the NFL? I’d never put money on a player to make it through an entire season healthy.

“If Bradford looks anything like he did in his limited action this preseason, I don't think it's a stretch to envision him posting a career-high passer rating, mainly because the bar (90.9) just isn't all that difficult to reach, especially in Kelly's offense.”

I’m totally blaming the receivers for me being wrong on this one. Bradford’s completing 63 percent of his passes, but the Eagles lead the NFL in dropped passes with 20, according to sportingcharts.com — and even that looks low to me. If the receivers catch just half of those, his rating jumps to 83.6.

What about those two interceptions Bradford threw that bounced off Jordan Matthews hands — or the touchdown that Josh Huff dropped in the end zone against Carolina for that matter? If you change the result of those three passes, Bradford’s passer rating is suddenly 88.6 and finishing the season above 90.5 becomes a lot more realistic. Too bad the reality is that unless he has a stellar second have, I’m going to be wrong about this one too.

I told you it was bad. However, there’s still an outside chance Murray surpasses the 1,100-yard mark I set before the season started. To do so, he’d need to average 89 yards per game for the rest of the season, assuming he plays in all eight. After the way he started the season, that may have seemed impossible, but the former Cowboy has rushed for 343 yards over the Eagles’ last four games. That’s an average of 86 yards per game. So maybe it’s not as unlikely as it seems.

Currently on pace for: 96

“When you think about it, it's only really five catches per game.”

Hey, I may finally get one right! Matthews has already caught 48 passes and is on pace for 150 targets this season. If that happens, he’ll definitely record a career-high in receptions and could catch close to 100 balls. Just imagine what his stats would look like if it wasn’t for those dropped passes…

Currently on pace for: 2

“The Eagles led the NFL with four return TDs last season, twice as many as the next closest team. While that number could be difficult to reach again, they have all the pieces back in place to do so.”

This was fresh off Kenjon Barner’s two return touchdowns in the first two preseason games, so I was feeling pretty good about Dave Fipp’s unit. They’ve been fine through eight games this season, but they just haven’t been able to get into the end zone. Much of that has to do with the fact that Darren Sproles seems to call for a fair catch on nearly every punt. This one is going to be close, but it’s looking like I’m going to be wrong yet again.

Check back later for Part 2 of the over/under update.