Five reasons you should be worried about the Eagles going forward 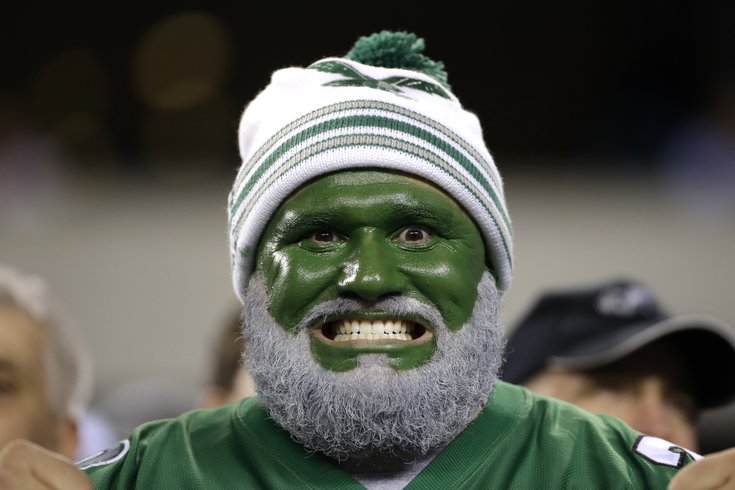 Eagles fans may want to think twice before going all-in on the Eagles.

Are you riding high after the Philadelphia Eagles big overtime win in Dallas on Sunday night?

Well you shouldn't be. After all, they struggled to beat a team that had lost its previous five games and was without starting quarterback Tony Romo. And while "a win is a win" may help you sleep at night, there's plenty of reasons for concern heading into the second half of the season.

On Tuesday, I outlined five reasons to believe the Eagles are going to be better in their final eight games, but nothing is guaranteed when your team is 4-4. There's been plenty of bad to go along with the good, so each of those reasons comes a caveat, one that will likely leave you questioning your resolve in this team going forward.

To recap, here's why you should be upbeat about what the rest of 2015 holds for Chip Kelly and the Birds:

And now, here's why you might want to think twice before going all-in on this team:

Their first-half schedule wasn’t all that tough

They Eagles may face eight opponents whose collective record is under .500, but it's not like that's a whole lot different from what they've seen so far this season. And they're only 4-4 at the midway point of their season. Some bullet points on their schedule so far:

•   The Falcons are suddenly 6-3 after starting the season 5-0, so that loss is looking worse and worse as the season goes on.

•   The Eagles four wins came against teams that are a combined 16-18.

•   Their four losses came against teams that are a combined 19-14.

•   The Eagles first-half opponents have a combined point differential of plus-nine. Just nine.

So, yeah, it's not like they've been playing a contender each week...

Bradford may have hit his ceiling

Chip Kelly and Pat Shurmur aren't lying when claiming that Sam Bradford has been improving throughout the season. His numbers only tell part of the story -- and not just because of how dropped passes have impacted his production. He's also looked more confident in the pocket and as a result he's been more accurate and shown more of a willingness to look downfield in recent weeks.

Bradford seems to be finally finding his rhythm in Kelly's uptempo offense. And while that's a great sign for an Eagles team that struggled to score early this season -- 78 points through first four games (19.5 PPG), 115 points in four games since (28.8 PPG) -- it also creates some concern going forward. He can't continue to improve each week. It's just unsustainable. Unless you think he can magically become Aaron Rodgers, he's eventually going to hit a wall -- or in this case, a ceiling.

At some point, Bradford's familiarity with the system and his new teammates will max out, and that growth we've been seeing from week to week will begin to flatline. The former Heisman winner is no longer a rookie with unlimited potential. He's a veteran, playing in the final year of his rookie contract. Bradford's career numbers -- and it isn't that small of a sample size at this point -- suggest that he's nearing that point. What remains to be seen, however, is whether or not Kelly can get more out of his quarterback than other NFL coaches could.

Injuries are not a matter of if ... but when

Jason Peters, 33, said on Wednesday that he's 50-50 to play in Sunday's game against Ndamukong Suh and the Dolphins. Peters missed all of the Cowboys game and most of the Panthers game with a back injury and previously failed to finish another game after leaving with an injury. As the Eagles left tackle and best offensive lineman, losing Peters causes chaos along the line, with RT Lane Johnson -- who has been banged up himself -- being forced to fill in for Peters and Dennis Kelly starting in Johnson's spot. On top of that, they've already lost Andrew Gardner for the season, forcing them to start Matt Tobin in his place.

That's not good for an offensive line that lost both its guards in the offseason and struggled to find success early in the season. And just as that unit was starting to play better, the inability of Peters to stay healthy is a huge concern, especially due to a lack of depth there. One more injury and the whole thing could collapse.

On the other side of the ball, the Birds just lost one of their biggest playmakers for the season. Linebacker Jordan Hicks, an afterthought in the preseason behind Kiko Alonso, Mychal Kendricks and DeMeco Ryans. But over the first eight games, each of those players -- often more than one at a time -- missed significant time with injury, forcing the rookie out of Texas into action. And, boy, did he deliver.

Now, Kendricks and Alonso are back, but Ryans remains out. And given the injury history* of all three of those players, it seems like less of an "if" and more of a "when" regarding the next injury to the inside linebackers.

Oh, and to top it all off, safety Malcolm Jenkins could begin the second half of the season sidelined with a concussion.

The D has struggled in crunch time

The Eagles defense has played well this season. Don't get me wrong. But it seems like every time they need a big stop late in a game, they are unable to come through. Let's take a look back, shall we...

The Eagles took their first lead of the game, 24-23, on a Ryan Mathews' TD with 8:42 left in the game. But, as we all know, that didn't last. The Falcons regained the lead on their very next possession, thanks in large part to a 44-yard catch by Julio Jones on the first play of the drive. Matt Bryant hit a field goal to give the Falcons a 26-24 lead ... and win.

The Eagles were up 20-16 when Kirk Cousins and the Redskins got the ball back with 6:05 left in the game. They used over five and a half minutes to march 90 yards and take the lead, 23-20, with 31 seconds left. It was a hell of a drive by Cousins, which culminated in a game-winning, four-yard TD pass to Pierre Garcon.

The fourth quarter against Dallas started off well -- quite well, in fact -- for the Eagles defense, thanks to a pick-six by Jordan Hicks to give the Eagles a 21-14 lead. But for the rest of the game, the defense didn't do any favors for Sam Bradford and the offense. After each score by the Birds, the defense allowed the Cowboys to march down the field and tie the game. Here's the scoring summary from that fourth quarter:

As you can see, the defense couldn't come up with a stop that would've prevented the game from going to overtime. And while they won the game, who knows what would have happened if the Cowboys would've won the toss and gotten the ball first. The mood in Philly could've potentially be a lot darker this week.

Going forward, the team won't be able to keep winning like that. If you can't stop Matt Cassel late in a game, what's going to happen when you face Tom Brady in a few weeks -- or any of the NFC quarterbacks you could potentially face in the playoffs?

The Eagles don’t really have one dominant strength

Yesterday, I wrote about how the Eagles didn't really have one glaring weakness, like the secondary was last season. But there's a flip side to that coin. There isn't one specific area in which they dominate. That doesn't mean they don't have any strengths -- far from it -- but there isn't one thing they can rely on when all else fails.

Many thought that strength was going to be their rushing attack, and while that's looked much better recently, injury concerns along the offensive line continue to be a worry. They've also been good at creating turnovers, but those can vary from week to week and can't always be depended upon (like against the Cowboys).

There is, however, something to be said for being well-rounded. And, right now, that seems like what the Eagles are: well-rounded.

Unfortunately, that's not typically enough to win in the NFL.