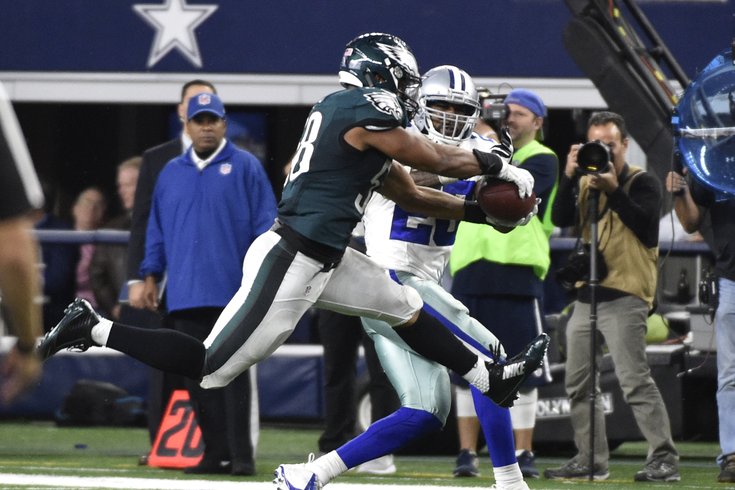 After the Philadelphia Eagles made rookie ILB Jordan Hicks their third round pick in the 2015 NFL Draft, I think it's fair to say that the majority of Eagles fans and media went, "Huh?"

After all, the Eagles had just traded their star running back for Kiko Alonso, they had given DeMeco Ryans a contract extension, and they still employed the most athletically gifted player of the group, Mychal Kendricks. Even folks in the scouting community didn't like it:

Just reached out to an NFL scout about Hicks. Response: "Stupid pick."

Through the first half of this season, Hicks has had one of the best rookie showings in Eagles history. In roughly 6.5 games, he has 50 tackles, one sack, one forced fumble, three fumble recoveries, two interceptions, one INT return for a TD, and three pass breakups. He also knocked Tony Romo out for half the season, and has generally been around the ball all game, every game.

Against the Cowboys Sunday night, Hicks provided the turning point in the game, when he picked off Matt Cassel and took it 67 yards to the house for a pick-six.

"They were in a stacked bunch," explained Hicks, "and the running back did a little flair out route. I saw, it and that was my coverage so I just jumped it."

Here's that play, which will serve as one of the biggest highlights of the Eagles' season:

"I looked over and saw Cassel running, and I knew he couldn't catch me," said Hicks.

In his rookie season, Hicks has shown that he is a complete three-down linebacker, who can play the run, blitz, and cover both running backs and tight ends. It's his coverage that is particularly impressive, which is rare for a rookie, but makes sense considering his background at the University of Texas.

"I'm confident in my ability in coverage," said Hicks earlier this week. "I've done it in college. The Big 12 is huge for coverage. They try to get you in mismatches, put you in space and see what you can do, so I've had a lot of preparation coming up."

When asked if he thought about being the Defensive Rookie of the Year, Hicks played the humble card. "There's so much more football to play," said Hicks. "A lot of things can happen. You just go out there every week and try to win games. That's the most important thing."

Since Hicks gave the boring answer, we'll look as his competition for the award, mid-way through the season. To note, I should make it clear I've watched almost none of following guys play all that closely, and am going solely on stats. Some players have decent stats but really aren't that good. Other players might be good, but for whatever reason their stats may just be low for whatever reason, so they didn't make the list.

With that disclaimer out of the way, my 2015 Defensive Rookie of the Year watch list (in alphabetical order):

Hicks left the game late with a pectoral injury. In the locker room after the game he said he felt OK (which means nothing, frankly), and he acknowledged that he'll have an MRI this week.

But through the halfway point, there's a really good argument to be made that Jordan Hicks has been the best defensive rookie in the NFL so far this season.