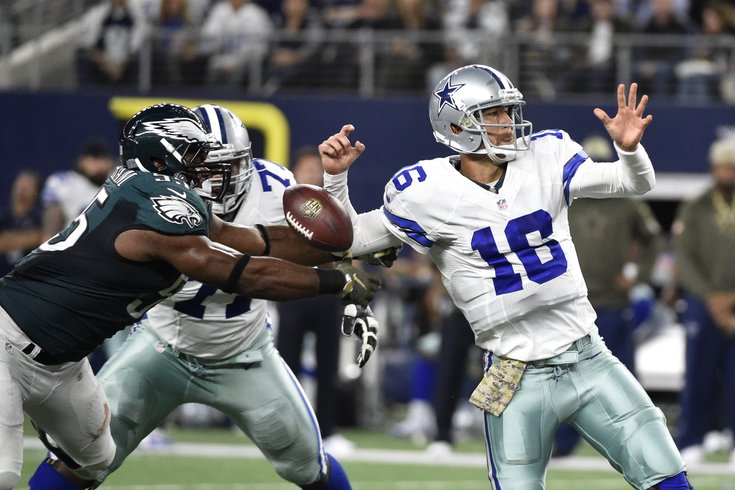 Earlier this preseason, I asked Brandon Graham to rank the left tackles he was going to face this season. He declined on that one, but did note that Cowboys LT Tyron Smith would be the best.

Last Sunday night in Dallas, Graham beat Smith badly around the edge for a pair of sack/fumbles, both of which the Cowboys were fortunate to recover. On the two plays Graham beat Smith, it doesn't look like Graham did anything all that special -- it just kind of looks like Smith did a poor job blocking Graham. Here were both of Graham's sacks, which look very similar:

Nothing special there, right? Think again.

"He was playing my bull rush," said Graham. "I was watching myself, and I kept (bull rushing) last game. I thought, 'Let me switch it up. I'm going to fake like I'm gonna (bull rush), and then I'll shed him,' and it was working."

If you look back up at the above sacks, you can see exactly what Graham is talking about. Graham fakes like he's going to try to push Smith back into the pocket, but instead gains the edge and is able to pop the ball out of Matt Cassel's hands. He was able to do that partly because he had been setting up Smith with bull rushes earlier in the game. Here's a bull rush in which Graham gets a good push on Smith and drives him back into the pocket:

And here's more of the same:

With Smith thinking bull rush, Graham was able to capitalize. That's just part of the many cat-and-mouse games that are happening all over the field during football games.

"Brandon has a great pass rush and he pushed that pocket," said Bill Davis. "He changed up his pass rush a little bit from bull, bull, bull, to the illusion of a bull rush and then he took the edge. Brandon does a great job of getting the ball out when he gets there. He just made a little tweak, and he's doing -- you can see him growing as a veteran player in his note taking and in the way he thinks through his pass rushes as opposed to just, ‘Set-hike. Hey, let me just go do my thing.’ He's really breaking down and having a plan with his pass rushing. He's adjusting in the game, and that's the growth that you love seeing players take."

Going into the Dallas game, Graham "only" had two sacks, but he had been getting good pressure in recent games.

Davis noted, "Oh, yeah, the sack number -- That is so frustrating for me because I see them doing it so well and really the outside world just says, ‘It was a sack or not.’ We see pressures and we see wins and we see guys -- to be able to play that veteran game of ‘What are you doing to stop my pass rush and how can I expand the different things I have that can beat you?’ That's a big step that I think Brandon has taken."