Week 8 of the NFL season is in the books. This week, we have a huuuuge NFC East obituary to file, the Dallas Cowboys. Let's just get right to it: 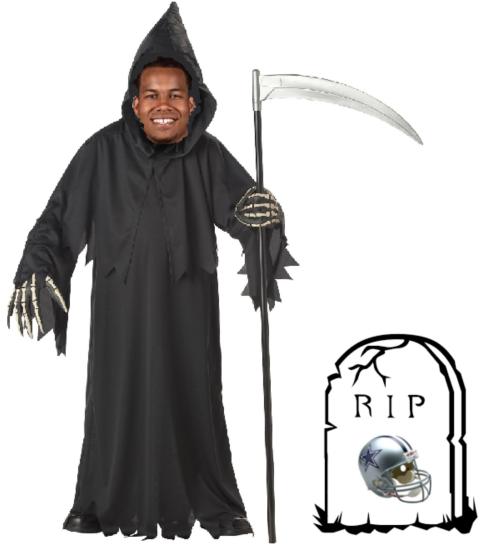 In Week 2, the Cowboys embarrassed the Philadelphia Eagles in a game in which the Birds could get nothing going whatsoever in their offense. However, that win came at a huge cost, when Jordan Hicks (proudly standing over the Cowboys' tombstone above) knocked out Tony Romo for half the season with a broken clavicle. He would later help finish them off with a pick six in the fourth quarter Week 9.

After Romo's injury, the Cowboys proceeded to drop the next six games with a combination of Brandon Weeden and Matt Cassel at quarterback. That's kind of what the Cowboys are, and what they've been over the last decade or so. They're a top-heavy team with a small number of players eating up a big portion of the salary cap, and little depth behind them. If they sustain a serious injury or two, their season goes to the toilet. The really good teams find a way to stay afloat while their best players are down. The Cowboys have not.

The Browns, Steelers, Texans, Colts, and 49ers have all managed to wins games with a backup quarterback starting. That is obviously not a collection of the NFL's finest so far this season. The Cowboys went 0-6.

Also, they enable domestic violence, so screw them. Bye, Cowboys. 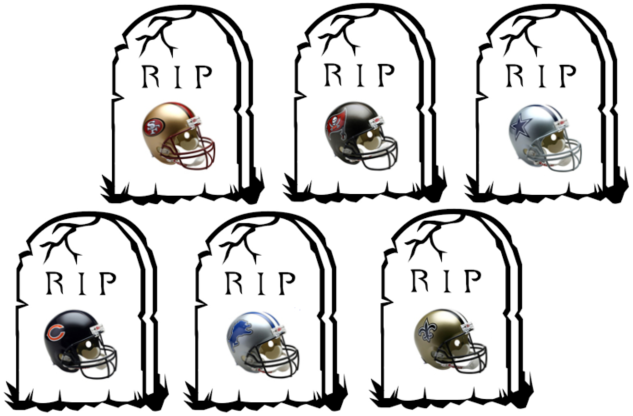 In his first action since he returned to the field after pulling a hammy Week 1 against the Dolphins, DeSean Jackson had three catches for 15 yards. And that would also be his stat line on the season so far: 3 catches, 15 yards. After the game, Jackson said he can't throw the ball to himself:

I also asked about the dropped passes today. DeSean Jackson said he's not the one making the drops #Redskins

So that's what DeSean is up to these days.

The Redskins have actually lasted far longer than I thought they would this season, but they're a loss away next week from ending up in the graveyard.

Here's a snapshot of the Rams' eight games this season and their statistical leaders in each game. If you'll note, Mr. Nick Foles has not topped 200 yards since Week 1:

Brandon Lee Gowton of BGN noted what kind of company Foles is keeping with his absurdly low number of passing yards this season:

In Week 5, the Cowboys took their whooping from the Patriots. Last week, it was the Redskins. This week it's the Giants' turn to get destroyed by an angry Tom Brady.

Over their next three games, the Eagles play teams with a combined record of 7-17. They have the Dolphins at home, followed by the Bucs at home and then the awful Lions on the road on Thanksgiving. I think the fan base's expectations have been lowered to the point where most would think going 2-1 over that stretch is acceptable. I disagree. The Eagles need to win all three of those before they take their beating in New England.

I'm about 90 percent convinced that the Falcons are frauds. In its last four games, Atlanta played teams with a combined record of 12-22. It went 1-3 in those games. After starting 5-0, it was looking like the Falcons would cruise to at least a wildcard spot. Now they'll have to worry about the Seahawks breathing down their necks the rest of the season.

The Seahawks rested last week, so I'll exercise my right not to write about them coming off a bye. I will note, however, that there is a great Sunday night game this week: Cardinals at Seahawks.

The Vikings are 30th in total offense, gaining just 321.6 yards per game. Here are the seven teams averaging fewer than 340 yards per game:

Somehow the Vikings are winning. I don't think that will continue if their offense continues this kind of crappy output.

Over their last three games, the Packers have been out-gained 1475-912.

The Packers defense had played well in the early part of the season, but Green Bay isn't going to win many games allowing 492 yards per game, no matter how good Aaron Rodgers is.

Like the Seahawks above, the Cardinals rested last week, so I'll exercise my right not to write about them coming off a bye. Did I mention that there is a great Sunday night game this week: Cardinals at Seahawks?

Are you all finally ready to give this team a little respect?