Cowboys defense was gassed on the final drive against the Eagles 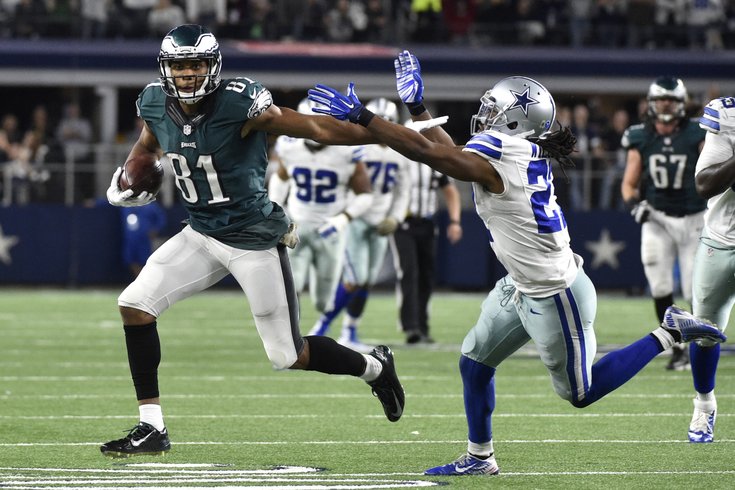 One of the benefits of running a fast-paced offense is that as long as you can get some first downs and stay on the field, you will eventually wear down opposing defenses.

This is where the Philadelphia Eagles excelled in 2013, in Chip Kelly's first year with the team. Sunday night in Dallas, the fast pace did what it was partly designed to do.

"Once we got rolling, then we started hitting with some tempo, and once we hit them with tempo we saw they were getting tired," said center Jason Kelce. "It really felt like those old drives. Once we get a big play, we just kept pushing it on them."

Opposing players will typically downplay fatigue, but Cowboys CB Brandon Carr acknowledged it was a factor. "The tempo is the tempo," said Carr. "We've been practicing for it all week. We see it twice a year. It's just those times where you say tempo gets you out of whack; it's the minute details that get you and they come back and run the same plays over and over and they expect you to fall asleep; run around like chickens with their heads cut off and they get their plays, and today they got some big plays and hurt us in the end."

It's also something that former Eagles quarterback and current ESPN analyst Ron Jaworski saw throughout the night:

Dallas defense was so gassed and tired, they couldn't even get lined up right. They're done. Just not a good football team.

You can really see the Cowboys' fatigue on the game-winning TD catch-and-run by Jordan Matthews:

There are a few things to note on the above play:

• Watch No. 55, Rolando McClain. He may as well not even be on the field. In the first gif above, at the snap, the Eagles run play action. McClain steps up, then retreats when he realizes it's a pass play. But watch his molasses-like change of direction when he transitions from moving toward the line of scrimmage to when he begins to run back. He doesn't have enough depth to affect the throw to Matthews. Then after the catch is made, in the second gif, you can see that McClain does not sprint down the field after Matthews, when he may have been able to make a tackle from behind if he had. Awful.

• On Jordan Matthews' route, watch in the second gif as he runs to the inside from the right slot, then sharply breaks back to the outside. Cowboys rookie CB Byron Jones (No. 31) tries to hold Matthews, but can't because he fell down. Ands it's not as if he slipped and fell -- he just fell, on his own. Perhaps a player with fresher legs is at least able to stay on his feet and stick with Matthews to some degree. 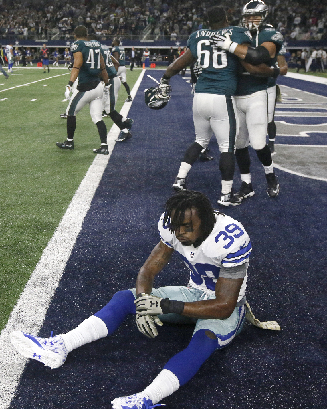 • Brandon Carr (No. 39) is nowhere to be seen. He followed Josh Huff deep down the field, but when Matthews broke free into the open field (and I'm going off memory from watching from the press box here), Carr seemed content to let safety J.J. Wilcox (No. 27) make the play. Once Wilcox missed, Matthews had a clear path to the end zone. The All-22 will give a better idea of what Carr was doing on the play. However, after the play, all Carr could do was sit down in the end zone, clearly gassed (see picture to the right).

• Wilcox, meanwhile, was beaten badly by what was a fairly un-Barry Sanders-esque, vanilla move to the outside by Matthews. It certainly may have been that he made a mental error with his poor angle, but it's probably more likely that he normally wouldn't have been beaten that badly if there were no fatigue involved.

The Eagles have been far better in second halves of games this season. Here's a look at the Eagles' point differentials in each of the four quarters (plus overtime) this season:

While it would be ideal for the Eagles to get some momentum going early, they have certainly proven that they can score in the second halves of games. Against Dallas, the Eagles tired out the Cowboys' defense until they were helpless to stop them.