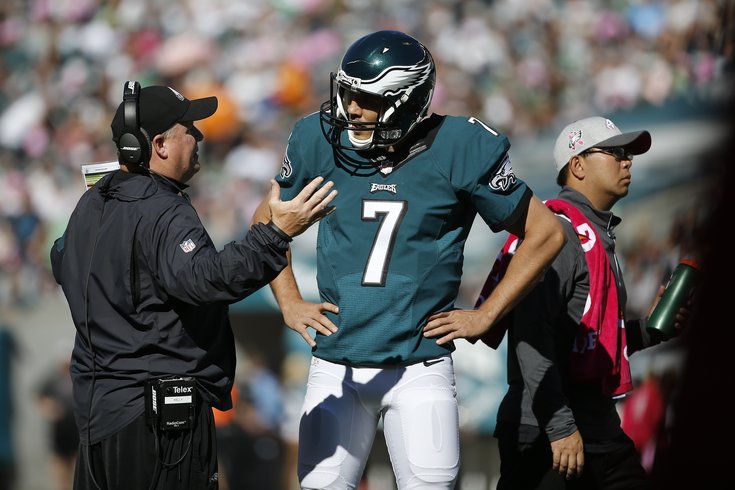 "It's either me or Kaepernick, Chip."

There's a theory among the Sam Bradford-supporting faction of the Philadelphia Eagles' fan base that Bradford will get better if he's with the Eagles beyond his first season with the team. The group may have some company in that regard in Chip Kelly, who has maintained nearly all season long that Bradford has done a good job, even if he has eschewed noting specific things Bradford had done well.

"I think everything in Sam's game has gotten better," said Kelly. "As I've said before, I've seen Sam improve on a weekly basis here. We're in Game Eight. He's better in Game Eight than he was in Game One. I think he's more comfortable in terms of what we're doing."

In theory, everyone should be improving as the season progresses, and certainly Bradford had his best game of the season against the Dallas Cowboys last Sunday night. But is it likely that he'll be better in year two with the Eagles? Kelly certainly hinted at that.

"In terms of where we are as an offense with a lot of these guys, it's kind of like there was a movie being shown and (Bradford) showed up halfway through it," said Kelly. "And then he's supposed to figure out what's going on and what happened in the first half of the movie because he hasn't been with us for the amount of time that Celek has been here and some of the other guys, like Kelce, have been here. It's something you have to get through reps; it's not something that can be forced."

The potential available quarterback options this offseason are junk, as they usually are, seeing as it's the most important position in sports and teams don't let good ones get away. As we've noted, Colin Kaepernick isn't good, or certainly not so much better than Bradford that you'd want another guy starting midway through the movie again. And then who do you have? Robert Griffin III? Kirk Cousins? Geno Smith? Pass, pass, and pass. And by "pass," I mean the Eagles are unlikely to want those guys, not that those quarterbacks are good at passing.

After the 2013 season, the Eagles seemed to be convinced that Nick Foles was "the guy" after his 29-touchdown, two-interception season. In the 2014 draft, after the Eagles' six desired targets (Anthony Barr, Odell Beckham Jr., Kyle Fuller, C.J. Mosley, Brandon Cooks, and Ha Ha Clinton-Dix) came off the board, they settled on OLB Marcus Smith, a player they did not ideally want to come away with in the first round. They drafted Smith over quarterbacks like Teddy Bridgewater and Derek Carr, both of whom look like they may have bright futures in the NFL. The Eagles wrongly projected Foles as a franchise quarterback and missed the boat on quality quarterback prospects.

"(Bradford) works extremely hard at it," said Kelly. He's in this building all the time, watching film, studying, working at it. We've seen constant improvement out of Sam. I hope it continues and he'll continue to play even better as we move forward."

That's fine and good, and bringing Bradford back for a second season at a reasonable price would make some degree of sense, considering the other available options. However, that should not preclude the Eagles from shopping for a long-long term answer at quarterback in the draft while they continue to assess what exactly Bradford is once he's caught up on the eight plays the Eagles run.