What they're saying about the Eagles: A new nickname for Fletcher Cox? 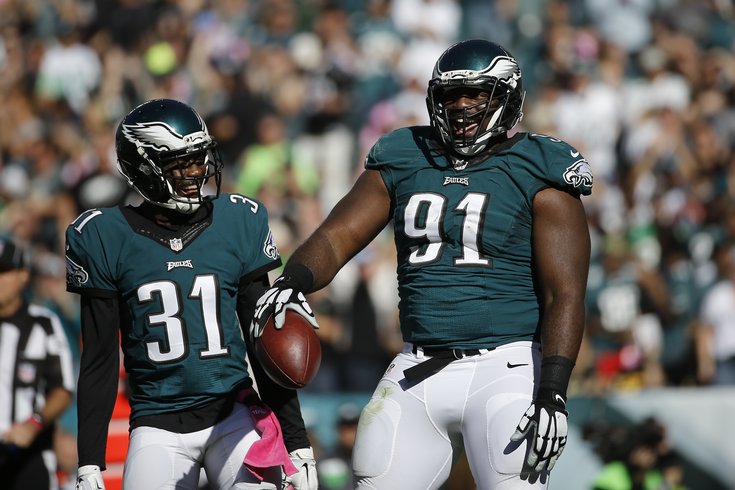 Following a big overtime win over the Dallas Cowboys on Sunday night, there were more than a few leftovers to sift through before completely shifting focus to the Philadelphia Eagles' upcoming game against the Miami Dolphins.

We've done our best to cover as many angles as possible, but with this team, there's never a shortage of storylines. And just when it seems like you're all caught up, here comes Malcolm Jenkins to tell you that he neglected to inform Eagles personnel that he sustained a concussion in the first half against Dallas.

And, of course, what would a week of Birds news be without checking in with some old friends.

Here's a look some of the things they're saying, locally and nationally, about the Eagles:

I don’t know exactly what this means, but it needs to be Fletcher Cox’s official nickname. Get it done.

Jenkins played more than half of game with concussion

After missing two days of practice, safety Malcolm Jenkins admitted on Thursday that he failed to disclose a concussion to the Eagles medical staff suffered during the second quarter of the Eagles win over the Cowboys. As someone who has suffered multiple concussions, I can tell you first hand that continuing to play football is one of the worst things you can do.

But Jenkins — or the team for that matter — probably aren’t to blame here, considering it was the veteran’s first concussion. He knew something was wrong, but because he didn’t know that it was a concussion, he never informed the coaches or training staff.

"I was in a fog," Jenkins said after participating in his first practice of the week. "It was like being a rookie. The game was moving really fast. As the game went on, I felt better. I knew something wasn't right."

Jenkins said he didn't tell anyone on the coaching or medical staff until after the Eagles' 33-27 overtime victory.

"I just kind of kept it to myself, which I really shouldn't have done," Jenkins said. "The medical staff and the coaching staff were kind of upset with me afterward. As players, we've all been made aware of the effects of concussions. It's definitely something I'll handle differently.”

This is not good.

In short run, Jason Peters' back is getting better, no surgery is contemplated, a source said. In long run, his condition is degenerative.

It's fair to wonder how much football Peters has left in him. The 12-year veteran turns 34 in January, and a degenerative injury certainly going to help him extend his career. On the other hand, Peters is incredibly tough and a freak athlete, so who knows. Peters has apparently acknowledged he might need to finish his career at guard. It doesn't seem likely that Peters would change positions during the season, however. For now, Lane Johnson will continue to fill in for Peters at left tackle until the veteran returns.

During the third quarter of the their 33-27 win over the Cowboys, Brandon Graham was hit was a 15-yard taunting penalty, and it was impossible to tell what the Eagles linebacker said to draw the flag. On Thursday, Graham told reporters what he said, and it doesn’t seem all that bad.

"I just leaned over and said 'We set the edge here,'' Graham said following Wednesday's practice at the NovaCare Complex. "I looked up and I knew I was in trouble. I saw Coach was [ticked], I saw Fletcher Cox angry with me. I knew it was stupid and I won't be doing that again."

Don’t worry, Eagles fans. Only one of the deals was actually belongs to the Birds’ front office, and you can probably already guess which former player that belonged to. Yup, Dream Team cornerback Nnamdi Asomugha. His five-year, $60 million deal ranks 7th on the list. The others belonged to a pair of quarters — Mike Vick’s 2005 contract with the Falcons ranked as the fourth-worst and Donovan McNabb’s 2012 deal with Washington came in at 20th.

Asomugha was 30 years old heading into his first season in Philly, and his skills began to erode. He made four interceptions and 82 tackles during his two years with the club, but the Eagles allowed 60 touchdown passes during that span. Because of the contract, Asomugha was closely scrutinized. Even the fact that Asomugha apparently ate lunch in his car at practices, rather than with his teammates, became news.

Watching live, I thought they were both questionable. Then I re-watched both plays, and changed my mind. They were both awful. But Les is right, the second one was much worse than the first.

The first pass interference call against Byron Maxwell on the drive that allowed the Dallas Cowboys to extend Sunday night's game to overtime, the contact seemed ticky-tacky, but maybe you could see throwing a flag, sort of.

The second one seemed beyond reasonable explanation, other than that Dez Bryant's leap for the ball looked awkward, and maybe the assumption was that somehow Maxwell must have impeded Bryant, before Bryant leaped into Maxwell as the ball fluttered past them.

Wait, Eagles backup QB Mark Sanchez contributed on the 41-yard, Bradford-to-Matthews touchdown? Not quite, but his advice to the second-year wideout before the play may have helped, according to Matthews.

[Sunday] morning, Matthews watched film with the Eagles' backup quarterback and picked up pointers on how to run his route.

"The one thing I want you thinking when we run this play is patience," Sanchez said, according to Matthews. "Be patient. Do not rush it. Because if you rush it, you're going to come back to the sideline [and] you're going to be mad at yourself. [...]

"[Sanchez] was definitely right," Matthews said. "It's a testament to him just getting me in the film room and us going over that."

I don’t blame him. Especially considering the Eagles are allowing the 10th-fewest points per game (15.0) to opposing quarters in ESPN.com leagues.

“Yeah, he’s not gonna start this week.” Jenkins reiterated. “I plan on playing well. Interceptions are negative points in fantasy, so I plan on getting my hands on a couple. Gotta sit [him] on my bench this week.”

And in case you missed any of our coverage...