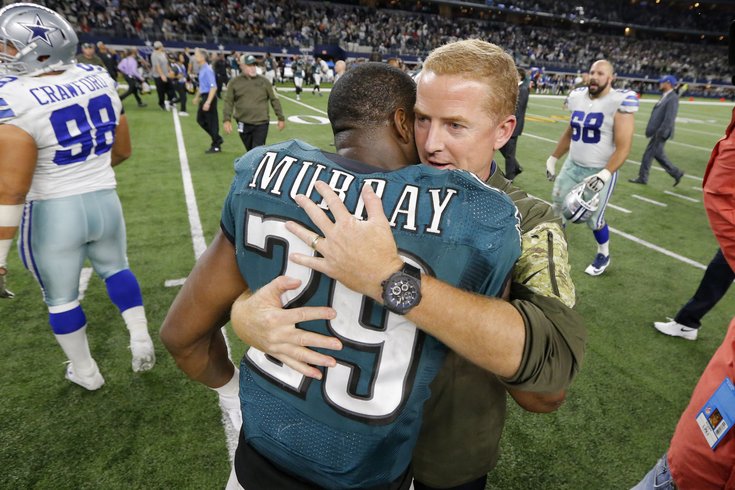 In obtaining DeMarco Murray from the Cowboys this offseason, the Eagles not only weakened the Cowboys run game, they got a player with intimate knowledge of the Cowboys' offense.

Last Sunday night against the Cowboys, Murray was calling out the Cowboys' plays. In this vine that was first posted by Brandon Lee Gowton of Bleeding Green Nation, Murray is yelling to CB Nolan Carroll that Bryant is running a hitch route. Brandon's vine:

Murray was correct. Here's the play where Murray was screaming to Carroll:

In the above gif, Bryant (top of the screen) does indeed run a 10-yard hitch, although it's a rather lazy one. You can see that Malcolm Jenkins (the inside defender on Bryant) clearly heard Murray's screams as well, as he's playing hitch all the way.

MORE ON THE EAGLES: Week 10 NFL picks | Checking in on the Eagles' season over/unders, part one | Five reasons to believe the Eagles will be better in the second half | Greg Hardy changes his Twitter bio, paints himself as a victim | Film breakdown: Brandon Graham becoming a smarter pass rusher

This was a huge moment in the game. It was 3rd and 10 on the Cowboys' final drive in regulation. Cassel did not have Bryant, so he had to check it down to Darren McFadden to get what they could. The Cowboys would convert the ensuing 4th and 5.

Murray not only had 86 yards and a TD on 18 carries, he successfully played the role of a coach as well.