A look ahead to the 2016 quarterback class: Carson Wentz edition 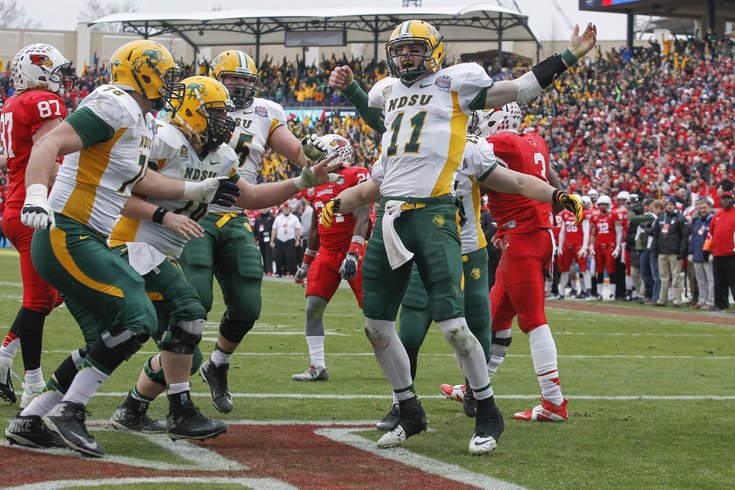 No matter what happens the rest of this season, or whether the Eagles re-sign Sam Bradford this offseason, one thing feels very clear -- The Eagles need to find a way to get a quarterback in the 2016 NFL Draft.

Today we'll take a look at a small school quarterback who some feel is good enough to slip into the first round, North Dakota State's Carson Wentz.

If you said "They all came from college conferences in which they faced top-end competition," you are correct. We would have also accepted "None of them have ever been in my kitchen."

Anyway, the point here is that the Eagles have never drafted a small school player under Chip Kelly, so it would be quite a leap from the ordinary for them to draft a player from North Dakota State who they'd hope could be their franchise quarterback. The one thing that makes me feel like it's, at least, a possibility is that Wentz is scheduled to compete at the Senior Bowl, which is where the Eagles fell in love previously with prospects such as Lane Johnson and Jordan Matthews.

Wentz started off this season on fire, posting the following stat line before he broke a bone in his wrist on his throwing arm. Before he got hurt, Wentz was 114 of 179 (63.7%) for 1454 yards, 16 TD, and 2 INT. He also rushed for 215 yards and 4 TDs. Let's get to the things I liked, and the things I didn't. To note, I watched Wentz's games this season against Northern Iowa, Weber State, and Montana, via DraftBreakdown.com.

Typically, when you think of 6'6 quarterbacks, you think of statues like Drew Bledsoe, or if you're an Eagles fan, an awkward lumbering runner like Nick Foles. However, Wentz is actually pretty nimble.

For example, I loved this play against Northern Iowa. He's going to be sacked, but he somehow stays on his feet and keeps running. You'll see wide receivers and running backs do this from time to time, but not often 6'6 quarterbacks:

Here he is avoiding the rush and making defenders miss in the open field. Wentz probably won't be changing his Twitter handle to @Cutondime11 anytime soon, but again, this is better shiftiness than you would expect from a guy his size.

The Bison even called some designed runs for him:

Obviously, there's a slight difference between the competition he's facing at schools like Montana, Weber State, and Northern Iowa than what he'd face going up against the Seattle Seahawks. He's not going to rattle off huge runs, but I think what his runs above show are that he is capable of making a play with his legs if he has to. As far as his fit in Philly goes in that regard, clearly opposing defenses would be forced to respect his running ability in zone read looks more than they currently do with Sam Bradford.

Wentz has a nice, quick but effortless release, shown here:

Wentz doesn't have a howitzer, but he does have a plus NFL arm, in my opinion. Check out this sideline throw against Montana:

That has some nice heat on it.

Wentz can also make touch throws, which can sometimes be difficult for bigger quarterbacks. He has particularly nice touch on his deep throws. On the following throw, there's actually some good and bad. The throw placement is perfect, but he made the window a little tighter than was necessary because the ball came out too late. Still, this is pretty:

Feel for the game / Competitiveness

Those two things are "intangibles," of course, but they show up in games. For example, Wentz is crafty. In the screen game, he is excellent with his eyes. He does a good job drawing the defense in one direction, and almost kind of throws no look passes to his running backs on screens in the other direction. In the NFL, giving your running back a fraction of a second extra to hit a hole can make a huge difference. Wentz has a great feel for that.

As for his competitiveness, there was a play against Northern Iowa in which Wentz threw a pick, and on the return, Wentz took on a block from a pass rusher, wound up on the ground, and was able to trip up the intercepting player with his feet. He really sold out his body to make the tackle.

Wentz often has wide open receivers to throw to, which doesn't really give you a great read on his game in full. That's not a knock on him. It's more of a question mark. When he competes at the Senior Bowl in January, Wentz will be among the most heavily scrutinized players there, going up against excellent competition.

His accuracy isn't bad. It's just kind of... meh. You'll often see Wentz throwing behind his receivers and he'll miss open receivers when he doesn't set his feet. For example:

I do like Wentz and think he's a very legit, skilled passer with intriguing athleticism. But I also think he has some things to prove at the Senior Bowl in Mobile in January.