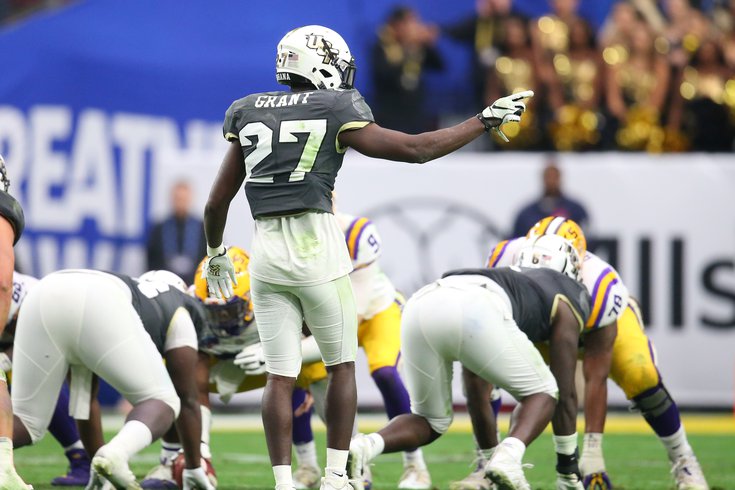 As long as you and the family are all gathered around the fire in the living room for the RoofClaim.com Boca Raton Bowl, (as well as other bowl games throughout the week), here are some players who could make sense for the Philadelphia Eagles in the 2021 NFL Draft.

The Eagles' need for a deep middle safety is fairly obvious with Rodney McLeod aging, and now having to rehab from a second ACL tear in three seasons. Grant has a great challenge in this game, going up against BYU's Zach Wilson.

He'll also be at the Senior Bowl in January.

Tonga is listed at 6'4, 321, but he's more likely either shorter than 6'4, or heavier than 321, because this is a wide-bodied player on the interior of BYU's defense. He has some pass rushing chops (8.5 career sacks) and added value in the passing game in that he helps DEs by pushing the pocket, thus not allowing quarterbacks to step up. A look:

The Eagles have brought in big-bodied DTs in the past, like Haloti Ngata and Anthony Rush. Tonga is a guy who might make sense on Day 3.

Eze is a long and athletic offensive tackle prospect originally from Nigeria, who is likely to go on Day 3 of the 2021 NFL Draft if he comes out. In that sense, he fits the theme of the Eagles' taking shots on big, athletic late Day 3 offensive tackles from overseas, like they did with Jordan Mailata and Prince Tega Wanogho. Here he is against UCF. As you can see, he's the biggest player on the field:

Offensive tackle isn't a huge need for the Eagles this offseason. At LT, they have Jordan Mailata and Andre Dillard. At RT, they have Lane Johnson and Jack Driscoll, though Driscoll could potentially be in line for a starting job at LG if Jason Kelce retires and Isaac Seumalo moves to guard (but we won't go too far down that rabbit hole).

Ideally, Eze would have experience both at LT and RT, but according to his college bio page, he has only played LT. Still, he makes sense as another late round developmental OT to add to the pipeline.

Stevenson is an explosive receiver who has had good production the last three seasons in Houston's spread offense:

He mainly works out of the slot, and has added value as a returner, where the Eagles have an obvious need.

If you're a regular reader of this series you already know where this is going. Yes, we all like Greg Ward, who should have a role on the team, just not as a starting slot, where the Eagles can use more playmaking ability.

Turner is an interesting prospect who mostly played at around 290 pounds as a 4i technique (lined up on inside shoulder of the tackle) his first few years at Houston, before moving outside to play more of a true DE spot as a senior. In just 5 games in 2020, Turner has 25 tackles (10.5 for loss), 5 sacks, and a forced fumble.

He'll compete at the Senior Bowl in January, and he seems like a smart kid in the following interview. Also note the agility for a 6'6, 270-pound rusher:

The Eagles don't have a severe need at DE, at least in comparison to other positions, but Turner could make sense on Day 3 as an edge defender with some experience playing on the interior.