John McMullen: Third down looks like a scary proposition for Eagles' defense 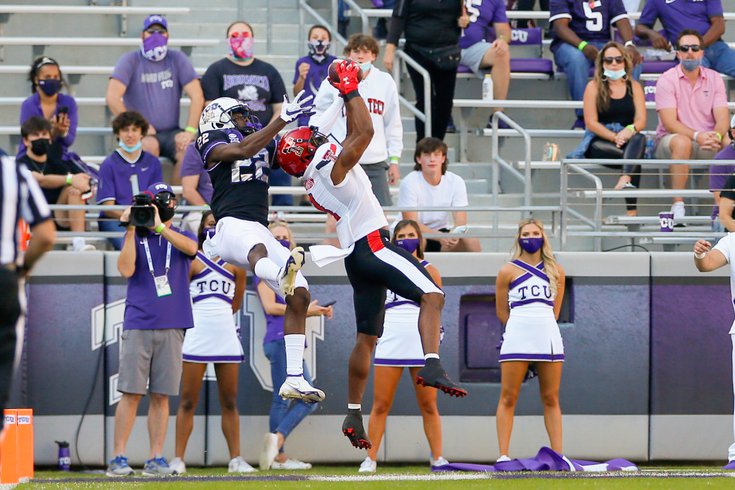 The Eagles took Texas Tech Red Raiders defensive back Zech McPhearson (8) in the fourth round of the draft.

When I asked Barrett Brooks about the back seven of the Eagles’ defense last week the big man reached over to the side of his desk and grabbed a bottle of TUMS.

Brooks, the former Eagles’ offensive lineman who covers the team these days as an analyst for NBC Sports Philadelphia, wasn't giving out any free plugs either. He was foreshadowing needing an antacid to provide relief for a sour stomach.

"I gotta bring my TUMS as I watch the game because on third down I'm gonna be sick the entire year," Brooks joked.

Other than Darius Slay the Eagles’ back seven certainly looks like the obvious weakness on the team and that’s after the improvements that brought two former Jonathan Gannon students over from Minnesota on one-year deals: safety Anthony Harris and linebacker Eric Wilson.

“[Darius} Slay’s a good player,” a former AFC personnel executive told PhillyVoice.com. “Where are the difference-makers? Harris can make plays on the ball with a [pass] rush. Wilson is a 20-point scorer on a bad NBA team.”

Much has been made about the change in defensive coordinator for the Eagles where the highly-regarded Jim Schwartz is being replaced by a rising star in the profession in Gannon.

Many around the league believe Philadelphia will essentially be a weigh station for the 38-yard-old Gannon en route to his final exit of head coach — the “Sean McVay of defense,” as one Eagles’ source claimed.

Around the league that’s the same hype for new Los Angeles Chargers coach Brandon Staley, who actually was McVay’s DC with the Rams and on the radar to replace Doug Pederson with the Eagles before bowing out when the LAC committed.

Absent hyperbole, the only way for Gannon to reinvent defensive football in Philadelphia is for the rookie DC to put together a unit that is far greater than the sum of its parts, just like Schwartz was expected to do in an organization where the owner demands it's offense, offense, offense before the defense can even get on the syllabus.

If the Eagles had to play today (and luckily they don’t), the little-used Craig James would likely be opposite Slay at CB with Avonte Maddox back in the slot. The two three-down LBs would be Wilson and Alex Singleton with second-year man K’Von Wallace being thrown into the deep end of the pool on the back end opposite Harris as Rodney McLeod continues to rehab from a torn ACL in December.

Like Schwartz, Gannon will be building his defense from front to back, relying on Fletcher Cox, Brandon Graham, Javon Hargrave, Derek Barnett, and Josh Sweat to make the back seven look better with a consistent pass rush.

“When you look at that defense with the Colts and you kind of go back through that scheme and trace it back, that scheme was more front dependent than coverage dependent,” former Eagles scout Daniel Jeremiah noted.

Instead of a lot of Wide-9 backed up by single-high looks as the default, however, you’ll likely see a movement front with far more Cover-2 and Cover-3 looks to protect the undermanned defensive backfield.

The most glaring deficiency of the Eagles’ offseason to date has been the failure to add significant help at CB and another shoe will be dropping at some point, be it in Phase III of free agency or on the trade market, something Howie Roseman already intimated.

“I know in 2017 that we needed a corner too,” the Eagles GM said. “And we got to August and we had a preseason game in Green Bay, Wisconsin and we made a trade with the Buffalo Bills and got a corner [Ronald Darby] that helped us win a Super Bowl.”

Roseman essentially confirmed another body is coming at some point this time around.

“We've had experiences about getting guys late in the process,” he explained.”And in that same year, we needed a running back at the trade deadline, we made a trade at the trade deadline. I promise you and the fans we'll do whatever it takes at any time of the year to improve the roster.”

There is no harm in seeing where McPhearson is at the upcoming rookie camp but expecting the Penn State transfer to hit the ground running in a division that features Amari Cooper, CeeDee Lamb, Kenny Golliday and Terry McLaurin at WR just to start would be asking too much of top-10 picks like JayCee Horn and Patrick Surtain.

A polarizing prospect who some personnel evaluators had in their top 100 and others had pegged as a priority free agent, Roseman started the sales pitch on McPhearson by claiming he was preoccupied thinking about trading back up in the third round to get him.

“We thought about going back up because we had Zech McPhearson right there,” Roseman said of the 84th selection traded to move up in the first round to get DeVonta Smith. “We wanted to get him because of the player he was, not because he was a corner and we needed a corner.”

McPhearson was still on the board, however, nearly 40 picks later and the Eagles jumped.

And now it’s up to Gannon, a coach whose background is with CBs, to get McPhearson and so many other flawed options sped up through the Schwart-coined start-up costs as quickly as possible.

The measuring stick for that may be just how many TUMS Brooks needs before that is accomplished.

"[The Eagles] need somebody to even go against a No. 2 wide receiver let alone the No. 1 wideouts," Brooks surmised of his former team. "We have nobody at this point."