Five things to watch for at Eagles rookie minicamp 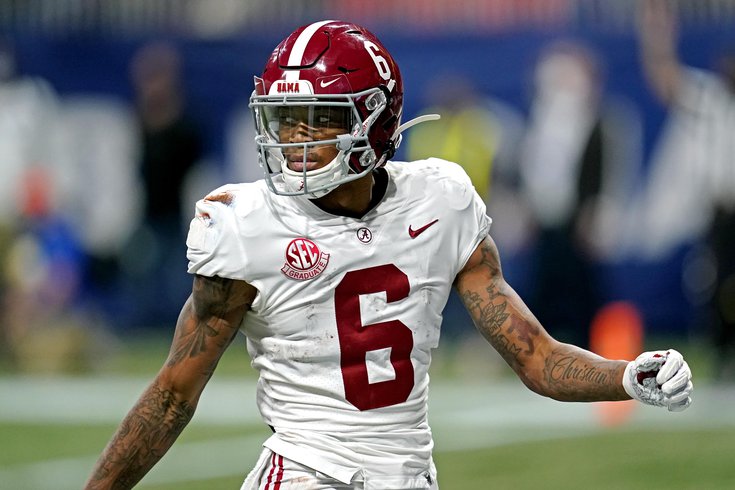 It won't be long before Eagles fans can get their first glimpse at the team's recent draft picks (and their crop of UDFA rookies). This week, the team announced dates for it's 2021 offseason program and that includes their rapidly approaching rookie minicamp, which will begin in just under a week (May 14-16).

With nice draft picks and a slew of undrafted players (including a few intriguing ones), there's plenty to look forward to, and some questions we're hoping to get answered as the team returns to some normalcy with an in-person minicamp after a year off virtual workouts in 2020.

Let's take a look at five things we'll be watching for when the rookies hit the field next weekend...

1. How skinny is DeVonta Smith?

No, that's not actually the question we'll be asking, but you can bet it's going to be a hot topic of conversation the first time we see the 10th overall pick suit up in an Eagles practice jersey. And considering the rookies won't be in pads, he's going to look even skinnier than usual.

But the point here is, who cares? That's not what's going to be the most important thing on Sundays. It's going to be more about how he runs routes, catches passes and makes defenders miss after the catch. And we're finally going to get to see some of that down at the NovaCare Complex.

The main concern with Smith's size is his ability to get off the line and stay on his route against bigger and more physical NFL defenders. We won't get to see any of that at rookie minicamp since he'll be matched up against guys who are all the same age as him, but for many of us it will our first glimpse of the speedy Alabama product in person. And while the big reveal will come a few weeks later when we see how much chemistry remains with former Crimson Tide teammate Jalen Hurts, simply seeing Smith on the field is exciting enough on his own given that he's the first Heisman winner to be drafted by the Eagles in over 80 years.

The other issue with Smith's size is his ability to remain on the field when the game gets more physical. Availability is the best ability, and we can talk about his weight all we want, but we don't know if he's going to stay healthy until he, you know, stays healthy. Everyone gets injured in the NFL. It's not if, it's when. And there's a very, very good chance that the first injury to Smith will be due to something other than his weight.

For now, everyone should just be happy this kid is wearing midnight green, enjoy the show he's going to put on at minicamp, and worry about his weight when it becomes an actual issue. It certainly hasn't hurt him this far.

2. Will Jalen Hurts show up?

I know we said we'd have to wait a few weeks to see Smith and Hurts reunited, but what if we actually don't? The Eagles starting quarterback — yeah, I said it — didn't have a rookie minicamp last season due to COVID. He's former teammates with the Eagles first two picks, Smith and Dickerson. He has been seen working out with teammates all offseason. And he is probably itching to get back into the building now that all signs point to him being the QB1 this season.

Maybe he just wants to set a good example for the rookies or maybe he just wants any excuse to get back on the field to continue improving on what was ultimately an up-and-down stretch as the starter to end his rookie year. Carson Wentz is gone. Hurts appears primed to prove he deserves the starting job going forward. And the Eagles appear ready to hand it over, assuming he does his part.

"We wanna see [Hurts] grab the job and kinda run with it and see what he can do over a period of time," Howie Roseman said in a recent interview with SiriusXM NFL Radio.

Obviously, he's not going to be able to do that at a rookie minicamp, but...

"The more you can see a player play, the more you can make decisions on that player," Roseman continued. "I think that applies here to Jalen. We wanna be in a situation where we get as much information as possible, give him the best opportunity, build that offensive line, give him the right weapons, put him in a system that really maximizes his ability, and then go from there."

There's hardly a guarantee that Hurts shows up, but it certainly would be cool if he did. And the fanbase would absolutely eat it up.

3. How healthy is Landon Dickerson?

The Eagles second-round pick suffered his second torn ACL back in December, and although he's progressing nicely in his quest to return to the field, he'll probably see very limited action during minicamp, if anything at all.

If you've read anything about Dickerson's personality since the Birds drafted him, then you know that the Eagles will likely have to physically restrain him to keep him off the field, but there's obviously no sense in rushing him along unless he's 100% healed and cleared to go.

The real question with Dickerson is going to be how ready he is to contribute in Year 1, especially if he misses any considerable amount of time during the offseason program. Right now, the Eagles still have Jason Kelce at center and are set at guard with Brandon Brooks and Isaac Seumalo. That being said, Brooks has been injured several times in recent years and Kelce is getting up there in age, meaning the rookie could be forced into action at any point this season. Given his injury, we'll likely have to wait until the summer to see how ready he is, but it's certainly something worth monitoring.

The Eagles have a glaring hole at outside cornerback opposite Darius Slay and many thought the Eagles were going to address that in free agency. When they didn't, many assumed the Eagles would use one of their first two draft picks on a cornerback. They didn't. Instead, they waited until the fourth round to add a defensive back, and they did so when they took Texas Tech's Zech McPhearson.

Right now, Jimmy Kempski has Craig James slotted in as the team's second starting CB on the outside, with McPhearson penciled in behind him. It would be a great sign if the rookie can win that job from James, who is likely better served as a depth player and special teams contributor, this summer at camp. In the meantime, we'd at least like to see that the CB can compete and contribute — and can hopefully be ready if/when the Eagles need him this season.

5. Where does Kenny Gainwell fit on the depth chart?

The name checks out, now it's time to see what he can do on the field. Gainwell would've likely gone quite a bit higher had he not opted out of the 2020 season, meaning if the Eagles drafted the player who was the only one in the nation in 2019 to post 1,000 rushing yards and 500 receiving yards (and actually finished with over 2,000 total yards, including nearly 1,500 on the ground), then this may wind up being a massive steal.

Gainwell aced the post-draft interview process and appears primed to be a change-of-pace back for the Eagles to use on passing downs as a complement to Miles Sanders. Right now, he probably slots in behind Sanders and Boston Scott — and will be competing with Kerryon Johnson and, to a lesser extent because of their widely different skillsets, Jordan Howard for third on the depth chart — but it would hardly be surprising to see him become Nick Sirianni's regular third-down back at some point this season.

BONUS: Will any of the undrafted free agents stand out? The most likely to do so would be former Wake Forest QB Jamie Newman, who many thought would be drafted rather than signing somewhere as an UDFA. He transferred to Georgia last season but never got on the field. He's a project quarterback, but #QBFactory. Another player to watch is 6-foot-4, 218-pound wideout Trevon Grimes, a Florida product with some serious size who was used heavily as a red-zone target for the Gators. Of his 38 receptions last season, nine of them were for scores.