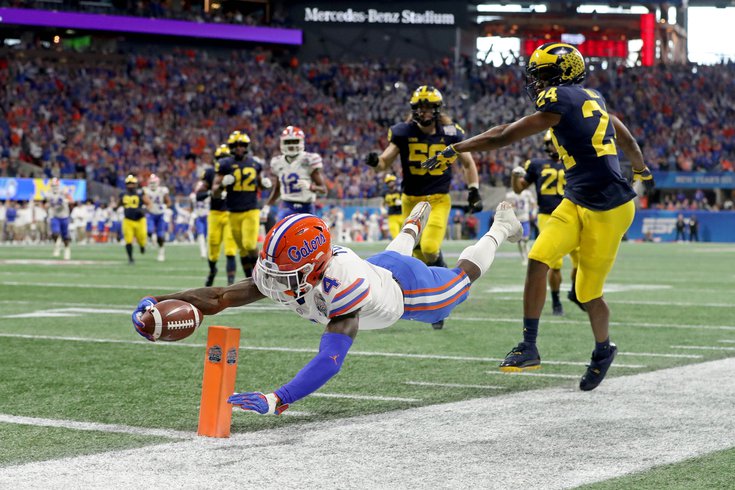 In case you're new here, we've goofed on GM Dave Gettleman quite a bit for moves he has made both in the draft and free agency that have lacked logic and modern analytic thinking. However, in the 2021 NFL Draft, Gettleman and the New York Giants made some savvy moves, and set themselves up to add good, young talent over the next few years. Let's analyze their picks, and trades.

• Pick 20 (Round 1): Kadarius Toney, WR, Florida. After the Eagles jumped ahead of the Giants to select DeVonta Smith, the Giants quickly traded out of the 11th pick with the Chicago Bears. It was the first time Gettleman has ever traded back in his nine years as a general manager, in any round, and he got himself quite a haul.

That's well done by the Giants.

I don't quite understand the Toney pick at 20. The Giants seemed hellbent on taking a receiver, despite already being strong at the position.

After getting jumped for Smith, the Giants seemingly just took the next receiver on their board. I can understand that skill position players tend come and go, and that they're drafting for long-term results (a good idea, generally speaking), but I think there were better players available.

Still, Toney is intriguing. He is a former quarterback who became something of a versatile piece in the Florida offense. His numbers over his four-year college career (120-1590-12 as a receiver, 66-580-2 as a runner) aren't super impressive, but he is an explosive athlete that Florida used in a variety of ways. There's no doubt that he's a fun player to watch.

Toney can make plays, but his game is not as refined as many of the other top receivers in this draft class. This felt like a bit of a reach, though certainly, the Giants made a good trade, grabbing three extra picks (including what could be a high 2022 first-round pick from Bears) for moving back.

• Pick 50 (Round 2): Azeez Ojulari, EDGE, Georgia: If Ojulari is healthy, he's a steal at pick 50, because (a) he would have easily been a first-round pick otherwise, and (b) he's a nice fit for the Giants' defensive scheme. In 2020, Ojulari was highly productive, as he had 9.5 sacks and 4 forced fumbles in 10 games.

However, he has a reported potentially degenerative knee issue.

Like they did in the first round, the Giants traded back before making this pick. They moved back from pick 42 in a trade with the Dolphins, in which the Giants picked up Miami's third-round pick in 2022. They now have extra first-, third-, and fourth-round picks in 2022 from those two trades.

• Pick 71 (Round 3): Aaron Robinson, CB, UCF: Robinson played inside and outside for UCF. He's thought of as a tough, versatile player who ran a 4.38 at his pro day, but he only had 1 career INT in college.

The knock on him is that he's skinny for an edge rusher, and could be a liability against the run, but in the fourth round, who cares if he can be part of a rotation with pass rushing skills? This is a nice developmental pick at a premium position.

I'm all for drafting RBs in the later rounds, but I think there were better ones available. I would also be afraid of picking a player like Brightwell, playing him in some small role, and having him cost a game because of a fumble.

As we noted above, the Giants now have a handful of extra picks in 2022, when the draft should be stronger and deeper than it was in 2021. The Giants' 2022 picks:

The Giants' 2021 selections were hit and miss, in my opinion. On the bright side, Ojulari and Smith will add depth to a position of extreme need, and the Giants were able to land both of them at value spots in the draft. On the critical front, I could quibble about Toney's value at pick No. 20, but if he becomes a player who is a pain in the ass to defend, then it will have been worth the move back for an extra first-round pick in 2022. Oh, and the Bears probably won't be good in 2022, so that may very well end up being a high pick.

In the past I've knocked the Giants for taking a "win now" approach to draft picks and free agent signings when they weren't reasonably going to contend. In this draft, I applaud their long-term thinking, in hoarding a slew of valuable picks in 2022.