What they're saying: Are Eagles right to go all in on Jalen Hurts this season? 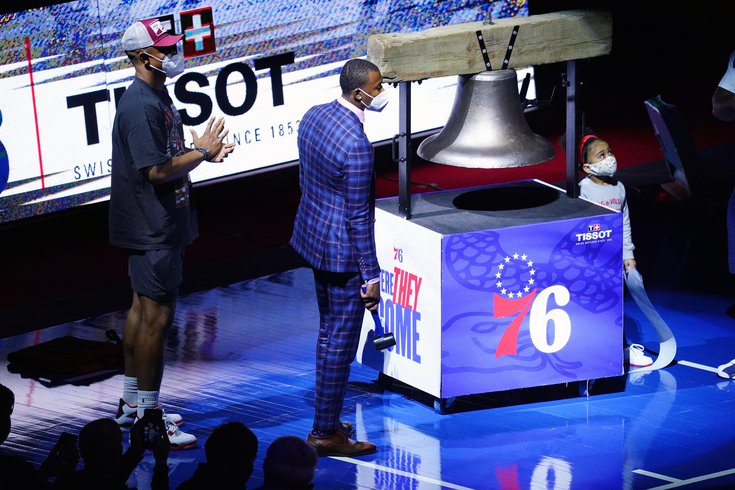 It looks like Jalen Hurts and DeVonta Smith are BFFs areadly.

It's a fun time for Eagles writers. Instead of having to document the front office's never ending dramatic soap opera or the Carson Wentz saga, the storylines surrounding this team are finally focused on the players actually on the roster.

The Eagles have their draft class and most of their undrafted free agents ready to go, and the team will start having virtual meetings and eventually working out together over the next few weeks and months before training camp starts in July. So what kind of assumptions and expectations can be gleamed, now that we mostly know what this team will look like?

One thing seems to be prevalent and clear — Jalen Hurts will probably be the starting quarterback, and his success and that of the Eagles' draft class from 2021 will be perceived to be tied together from here on out.

Why is that exactly? Well, it's a good jumping off point for us today with out latest edition of "What they're saying about the Eagles."

Though they didn't wind up adding Justin Field or Mac Jones — both of whom were on the board when the Eagles made their first round selection — the Eagles more or less picked their young quarterback in the 2021 draft, and it was Hurts, who they are giving the tools for success on offense. Was it the right decision?

The 2022 starting quarterback should eventually play a part in how this draft class is viewed. If Hurts proves to be a quarterback with whom the Eagles can win, and he benefits from throwing to DeVonta Smith and taking snaps from Landon Dickerson and the reinforcements that will surely come in 2022 with enviable draft capital and more cap space, then the way the Eagles played this offseason will be laudable. Or even if the Eagles acquire an established veteran quarterback in the next 10-15 months, then it would make sense that the Eagles didn’t engage in the quarterback market this offseason. But if the Eagles go into next year’s draft needing a quarterback, then it will be fair to weigh the player they can draft in a year against Fields. Perhaps the Eagles didn’t want to hitch the franchise to a first-round quarterback so soon after the Wentz era, or maybe the nature of the college football season limited the information they could accumulate. Opportunity is not a lengthy visitor, and the Eagles showed what they thought about the opportunity to draft Fields this year.

"We felt like … we wanted to get a difference-maker, [Howie Roseman said.] I think this was about the effect that we thought the players that we drafted had and not really a judgment on some of the other players that we didn’t take.”

Good luck finding anyone who would object to adding DeVonta Smith. He’s that exciting of a prospect for the Eagles, and he’ll change the offense from day one. But if Fields becomes a top quarterback, then passing on Fields could become a regrettable decision. There clearly was no consensus on Fields, considering Carolina and Denver also passed on him. Then again, there wasn’t a consensus on Patrick Mahomes and Deshaun Watson in 2017 when they dropped to Nos. 10 and 11, respectively. On the other side, Josh Rosen went No. 10 the following year. It could work that way, too. And the point is moot if Hurts plays well enough this year to become entrenched as the franchise’s quarterback. [The Athletic]

The Eagles made the conscious decision to pass over Field and Jones, as we said. There are a few out there who argue — like NFL Network's Peter Schrager — that the Birds' decision to turn to a QB in Hurts was a big mistake. Hurts is a guy who, as Schrager says, "went 1-3 last year as the quarterback and doesn't have a huge sample size."

Adam Hermann, who used to write for us here at PhillyVoice, is a little offended by this thinking, as he'll explain here:

That being said, it's not fair to fault a process because of later results — it's confirmation bias at work. While you might not agree with the Eagles' decision to pass on QB this year, their draft process felt sound this year. They wanted to add assets for the future while picking versatile, high-upside players, and also keep their options open at QB. That's as good an approach as you can have after you unexpectedly trade away your franchise QB at the outset of his very expensive four-year deal.

I also don't think Jones is very good, and while I like Fields, he's not a sure thing. So maybe the Eagles' scouts and evaluators looked at this year's quarterback crop and didn't like what they saw from either player. Choosing one of those two just because they're quarterbacks, even if your scouts are telling you not to, is the definition of bad and disjointed process.

There's a chance one of Fields or Jones becomes a very good-to-elite starter in this league, and that Hurts does not. But I won't lose sleep over the Eagles drafting the way they did this year. [NBCSP]

On the same lines of our previous entry, Domowitch can read the Eagles tea leaves, which are clearly showing that the team is going to go all in in 2021 to see what they have in Hurts, and then decide, after this upcoming season, whether or not he's going to be the guy going forward. The fact that the Eagles are surrounding him with players that can help him succeed should make Eagles fans happy, and confident in the front office — for now at least.

The good news is that injury-ravaged offensive line is all better, at least for the moment, and once again appears to be one of the best units in the league.

These things are really good news for Jalen Hurts, who is expected to be the team’s starting quarterback this season.

Hurts, the team’s 2020 second-round draft pick, had his ups and downs in the four season-ending starts he made after Carson Wentz was benched. He led the Eagles to a surprising win over the New Orleans Saints in his first start, throwing for just 167 yards, but rushing for 106 yards on 18 carries. He completed just 52% of his passes as a rookie, threw just two more touchdowns (6) than interceptions (4) and finished with a 77.6 passer rating.

It’s impossible to draw any long-term conclusions from Hurts’ small body of work last season, particularly given the circumstances in which it came.

That’s the purpose of this season: To find out if he can be the long-term answer at quarterback or whether they need to go look for one next year. [Inquirer.com]

With everyone high on Smith, and feeling confident that Hurts will have a chance to succeed at quarterback, that means fantasy football owners should draft the Eagles' Heisman-winning wideout, right? Over at The Ringer they ranked the top 14 soon-to-be rookies from a fantasy perspective, and Smith was slotted in the second tier, as a mid-round pick with upside (he is behind JaMarr Chase, Najee Harris, Kyle Pitts and Jalen Waddle). Here's more:

5. WR DeVonta Smith, Eagles: The concerns about the Heisman Trophy winner’s size are legitimate, but they won’t matter too much if Smith can get open consistently. Smith will benefit greatly from motion looks and lining up off the line of scrimmage to avoid getting pressed out of plays in year one, and I’m confident he’ll find his way into fringe WR3/flex territory by midseason, which makes him a viable eighth- or ninth-round fantasy pick in 12-team PPR leagues. There’s some boom-or-bust fantasy potential here, especially with an unproven, mobile quarterback in Smith’s college teammate Jalen Hurts, but I’m betting on a top-35 fantasy finish for the former Crimson Tide receiver. [The Ringer]

Howie Roseman was widely criticized for his decisions last spring, when he picked Jalen Reagor over Justin Jefferson among other mistakes. He hasn't been particularly good as an evaluator of draft talent in recent years, but it does appear that Roseman has evolved, grown and learned from his mistakes. By taking the best player available at nearly every turn in 2021, he is giving the Eagles their best chance to actually succeed and develop a roster in a very long time.

From the decision to flip a first and a third to move up a few spots to steal away the final marquee-level player available in the first round from the New York Giants, to the decision not to trade up to select Zech McPhearson at the end of the third round – instead, allowing him to naturally fall to the team at 123 – and even flipping a pair of late Day 3 picks to Washington for a fifth-round pick in the 2022 NFL Draft, which is near-continuously considered a deeper class, Roseman stuck to his board, made picks based on value, and walked away with a class The Athletics’ Dane Brugler called the best of the best in his rankings column (subscription required).

Why, you may ask, did the Eagles use four of their nine draft selections on defensive linemen? Well, because Milton Williams, Marlon Tuipulotu, Tarron Jackson, and Patrick Johnson were all surely the best players on the Birds’ board when they came on the clock, and no player, not even DeVonta Smith, is a sure thing. If, say, Jackson transcends the group and becomes the next Danielle Hunter, no one will care that he was picked after Williams. If Jackson becomes the second coming of Deion Jones or Kwon Alexander, I don’t think anyone will care that the team opted to pick him in the sixth over, say, Jabari Cox in the fourth.

And honestly, the decision to go with Landon Dickerson over a cornerback like Kelvin Joseph, who is a high-upside player at a position of need, highlights just how committed Roseman was to drafting the right way, as his completely attainable upside as a 10 year Pro Bowler is insane value to land in the second round, let alone at 37. [Section215.com]

And finally, to turn from the drafted players to the players already on the Eagles roster, Zangaro points out a pair of losers who have seen their stock drop considerably after the completion of the 2021 NFL Draft. Both are on the offensive side of the ball.

Boston Scott: I still think Scott will be on the team, but the Eagles drafted a player in Kenny Gainwell in the fifth-round that does a lot of similar things. Gainwell is known as a dual threat and he has the ability to be a nice complement to Miles Sanders in the running back room.

Zach Ertz: He’s still here. There seemed to be a chance Ertz would be traded during the draft and that didn’t happen. Not only that, but the Eagles didn’t even draft a tight end, which would’ve made it even easier to move him. I still don’t expect Ertz to return for 2021 but he’s probably getting more frustrated the longer this takes. [NBCSP]