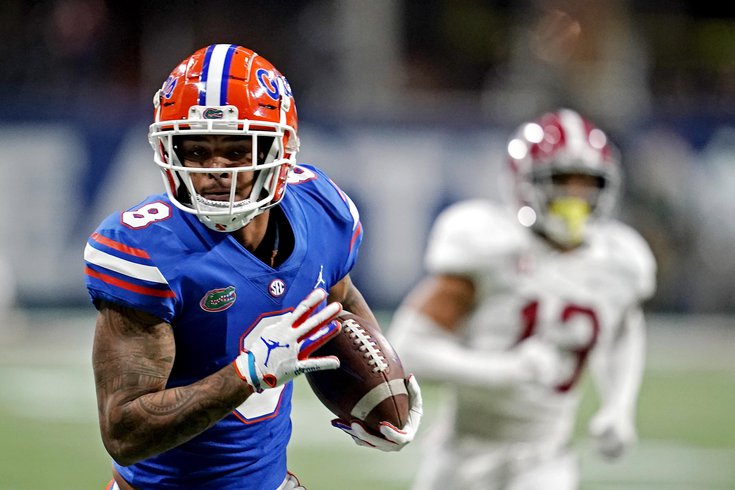 During the 2021 NFL Draft, the Philadelphia Eagles made nine draft picks. After it was over, they reportedly added an additional seven undrafted free agents. As a disclaimer, while reports of UDFA signings are usually correct, there are occasions in which a player is initially reported to have signed with one team, but instead they end up with another.

The chart below shows a snapshot of the Eagles' reported signings, and their rankings/grades via Dane Brugler of The Athletic, Lance Zierlein of NFL.com, and TheDraftNetwork.com. We'll update this if/when more reported signings trickle in.

Because the 2020 college football season wasn't played in full, many prospects chose to stay in school for another year, when they otherwise might have declared for the draft. As such, the 2021 NFL Draft was a little more watered down than usual, both in terms of players who got drafted, and ones that will become undrafted signees. In other words, the undrafted free agent class isn't as intriguing as it has been in previous years.

Still, the Eagles did (reportedly) find some worthwhile additions. (H/t to Brandon Gowton of BGN for tracking down all these signing reports.)

Grimes was a draftable player. At 6'4, 220, he has great size for the position, and he ran a 4.50 at his pro day. His measurables paint the picture of an appealing wide receiver prospect. Even after suffering an ACL tear his final seson in high school, he was a highly recruited prospect who initially enrolled at Ohio State, but transferred to Florida.

His college production was underwhelming:

And here are all of Grimes' 1-on-1's at the Senior Bowl. As you can see, if he's going to make it, he'll have to do so as a contested catch guy, because he going to have difficulty separating from NFL corners.

It's worth noting that on the character front, Eagles QB coach Brian Johnson was Grimes' offensive coordinator at Florida, so the Eagles will have good intel there.

At 6'3, 235, Newman is a bigger quarterback who possesses a lot of the same skills (mobility, power, a good enough arm, and poise under pressure) as Jalen Hurts. He has also struggled with accuracy, like Hurts.

In that sense, the signing is logical if Hurts proves that he's a starting caliber quarterback during the 2021 season and Newman can develop into a capable backup. The Eagles wouldn't have to completely change their offense should Newman have to enter a game for Hurts in 2022 and beyond.

While Newman has a lot of tools, he is also far from a finished product, and he had a weird college career that talent evaluators had to sort out prior to the draft. He lost a quarterback competition early in his Wake Forest career to John Wolford, and then transferred to Georgia, only to opt out just before the start of the 2020 season, which certainly didn't help his chances of getting drafted.

But solely based on talent, Newman was clearly a draftable prospect, and an intriguing potential signing by the Eagles, particularly since they don't currently have a QB3.

At 6'3, 307, Awosika is probably moving to guard at the next level. He has some athleticism, but he's shorter than ideal, he has short arms, and Burger King hands.

Awosika played on both sides of the line at Buffalo, and he's a masher in the run game. Running back Jaret Patterson had 3,884 rushing yards his last three seasons at Buffalo, and Awoskia was a part of his success:

The Eagles have some iOL depth, but Awosika feels like a strong candidate for the practice squad.

Bailey had 25.5 sacks over his career in 54 games at ISU. At 6'2, 246, the Eagles could potentially view him as a linebacker. If so, he'll be a developmental project.

Ausbon led Texas A&M in receiving in 2019. Here's his game against Georgia in 2019. He often lined up in the slot, and he made some contested catches. His value could perhaps be inside against smaller slot corners.

There isn't much in the way of dynamic traits. If he can catch the ball well in camp, Ausmon's ceiling is probably "bigger Greg Ward."

Two-year starter and team captain with average size and a lack of desired length that shows up in his tape. Crider is much more consistent and effective as a pass blocker than he is in the running game. He does a nice job of maintaining a balanced, wide base in his pass sets and shows good awareness of rushers threatening his gaps on either side. He's a neutralizing base blocker at best, but more times than not, he will need plenty of help to move an NFL lane-clogger.

Crider is an extreme longshot to make the roster, but the Eagles will need centers to get them through camp, especially if second round pick Landon Dickerson isn't ready to play yet.

His numbers were 61-657-6 in the passing game in four years at Nebraska, but he does offer some ability as a blocker. Stoll's best chance to make the roster will be as a blocker and on special teams. The Eagles are thin on depth at tight end, assuming Zach Ertz is a goner. It's mildly surprising the Eagles didn't find a more appealing tight end to add after the draft, as there is opportunity there to make the roster.