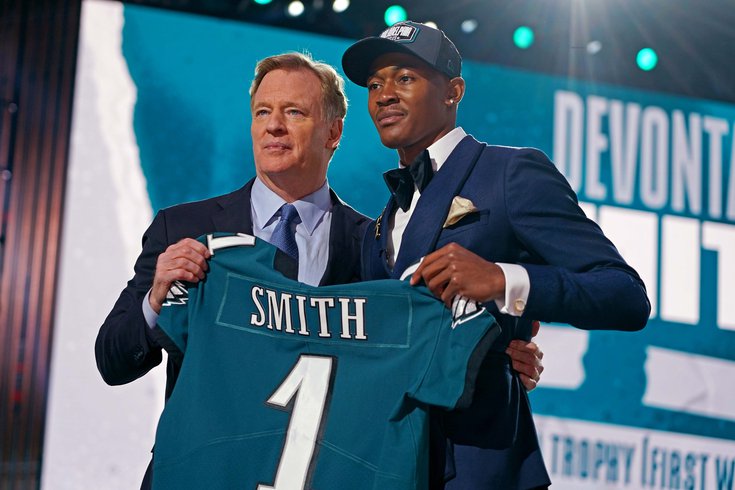 Alabama's DeVonta Smith with NFL commissioner Roger Goodell after being selected by Philadelphia Eagles with the 10th overall pick.

The Eagles made nine picks in the NFL Draft this weekend. Some of them, like trading up to take Devonta Smith at No. 10 overall, received universal praise.

Others, like their decision to draft cornerback Zech McPhearson in the fourth round as their one and only cornerback taken got less than stellar reviews.

By no means is a quick analysis of a draft, less than a day after its finished, a good way to actually gauge whether the crop of players a team has selected is a good group. But it's fun to do it anyway.

Without further ado, let's take a journey through report cards up and down the internet to see exactly how the Eagles and Howie Roseman were graded for their performance in the 2021 NFL Draft.

The Eagles became the first team in 16 years to use back-to-back first-round selections on receivers when they traded up two spots to pick Smith (they selected Jalen Reagor 21st overall last April). Smith is an outstanding talent who could very well prove worthy of sending their division-rival Cowboys a third-rounder for the two-spot swap. Dickerson was selected as a guard and could be center Jason Kelce’s replacement in a year or two, though his injury history made him a bit of a risk as a top-40 pick. Williams’ athleticism had earned him a spot in the third round. He'll give Philly some needed depth at defensive tackle.

They found the nickel corner they needed in McPhearson early in the fourth, then found value in the fifth round with a slasher, dual-threat back in Gainwell. Trading sixth- and seventh-round picks this year to Washington for a fifth next year was shrewd, if for no other reason than the fifth-rounder will play as a better trading chip if they need to make another move down the road. With Josh Sweat and Derek Barnett set to hit free agency soon, they were smart to nab Jackson in the sixth round. Stevens is a strong tackler and leader who could play linebacker or safety in the NFL. [NFL.com]

The Eagles are positioned to make a real run in next year's draft because they own the Dolphins' first-rounder -- they moved back six spots in Round 1 this year -- and are likely to get the Colts' first-round pick if Carson Wentz plays 75% of the snaps and they make the playoffs. I don't know how good they'll be this season with Hurts under center, but they're one of the most intriguing teams in the NFC. Smith could be rookie of the year. [ESPN]

Traded from No. 6 to No. 12 to No. 10 to land Smith, a possible target at No. 6. But trading down in the third round for an extra sixth was foolish and cost the Eagles a much-needed cornerback. Dickerson could start the year on IR. [NY Post]

The Eagles sent Dallas a third-round pick to move up two spots in the first round and select Smith, but that seems worth it: They come away with a big-time playmaker and the no. 1 receiver for their offense. Philly doubled down on Alabama players by nabbing Dickerson, who should bolster the interior of their line right away. I’m intrigued by Gainwell, as the fifth-round pick could complement Miles Sanders and become a pass-catching threat in space. And on defense, the Eagles did well by nabbing Williams and Tuipulotu. The former has the tools to emerge as a subpackage rusher early in his career. [The Ringer]

The Philadelphia Eagles surprisingly made the smart pick in the first round and did not reach with the selection of DeVonta Smith. The reigning Heisman Trophy addressed an immediate need for Philadelphia and gives an explosive playmaker for Jalen Hurts.

After that, the Eagles made the trenches a priority on Day 2, which many fans were not happy with because they have holes at linebacker and cornerback. But in Round 2, they took offensive lineman Landon Dickerson and in Round 3 took Milton Williams.

On Day 3, they finally grabbed a cornerback in Zech McPherson, who was ranked the fourth-best boundary cornerback by Football Gameplan’s Emory Hunt. In the fifth round, they added running back Kenneth Gainwell, who could be Nyheim Hines in Nick Sirianni’s offense. For their last few picks, they drafted DT Marlon Tuipulotu, EDGE Tarron Jackson, SAF JaCoby Stevens, and EDGE Patrick Johnson. [DraftKings]

DeVonta Smith was worth trading up for in the first round. The team’s Day 3 picks were pretty good, including and the Eagles also got some value during Day 3 with the selections of cornerback Texas Tech cornerback Zech McPhearson, who the Eagles contemplated trading up to get. Running back Kenneth Gainwell, defensive end Tarron Jackson, and safety JaCoby Stevens could all see significant time on the field this season. The Day 2 selections are what keep this draft class from getting a higher grade. The Eagles selection of Landon Dickerson will look great, only if he can stay healthy. Dickerson has already had two ACL injuries. [NJ.com]

We had to do some math to figure out the overall GPA from The Athletic's Sheil Kapadia, as he reviewed not the draft class as a whole but each individual pick. His analysis yielded a 2.81 GPA, or B- (80-82%) grade overall. Here's a snippet from his worst rated pick, Marlon Tuipulotu in the sixth round:

At this point in the draft, I like the strategy of taking fliers on high-upside players. Given that Tuipulotu hasn’t shown much juice as a pass rusher and considering the back injury, I’m not sure he falls into that category. But assuming Tuipulotu was the best player on the Eagles board, I think this pick is fine, if unexciting. [The Athletic]

Kudos to the Eagles for not leaving Jalen Hurts without a shot in 2021. The Devonta Smith and Landon Dickerson picks go a long way toward healing an increasingly veteran offensive line and diversifying a wide receiver corps that has been threadbare over the past two seasons.

Dickerson, who is coming back from an ACL injury, represents the kind of high-upside injury bet that many teams made in the upper-middle rounds this year. While some won’t hit, Dickerson is a player who can operate at any position on the offensive line in a pinch, but right away will compete for a shot at guard. [SI.com]

The Eagles are getting incredible value for Patrick Johnson, a player ranked 92nd on PFF’s Big Board. He is a nice technical player but needs to create consistent value by showing up to play on every down. When he’s on his game, he is a very good player. [PFF]

Jumping the Giants for DeVonta Smith was a smooth move, and I guess the Cowboys knew they’d have to deal with the Heisman winner either way, so they might as well get a third-round pick out of the deal. Landon Dickerson was a risky pick with his injury history, especially with the other centers who were still on the board. Milton Williams was the most underrated interior defender in this draft, and deserving of all the fist-bumps. Kenneth Gainwell was the best of multiple bargain picks on Day 3 that should help their depth on both sides of the ball. [USA Today]