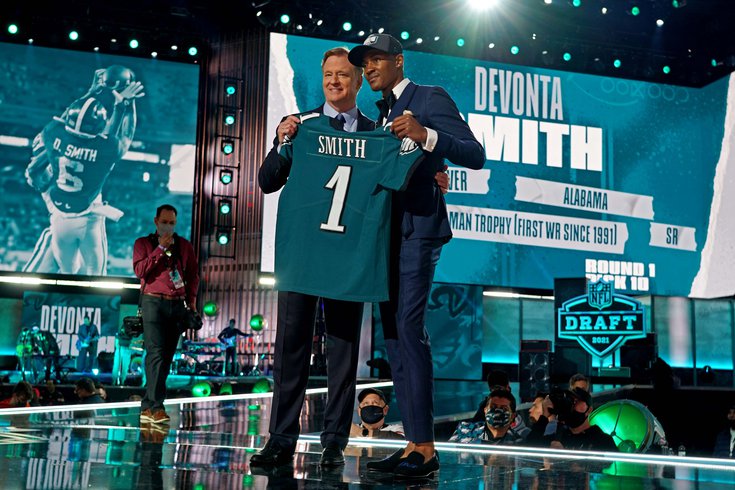 Alabama's DeVonta Smith poses with NFL commissioner Roger Goodell after being selected by Philadelphia Eagles with the 10th overall pick.

For a while on Thursday night, it was looking like Howie Roseman and the Eagles were going to be made to look a fool. After trading back from six to 12, likely believing that one of the four main players at their two top positions of need (cornerback and wide receiver) would still be available to them after the move, the Birds suddenly found themselves in an uncomfortable position.

With three of those four players already gone in the Top 10 — Jaylen Waddle, Patrick Surtain II and Jaycee Horn — and only DeVonta Smith left on the board, Roseman knew he had to make a move or else he'd likely lose Smith to the Giants, one spot ahead of their scheduled pick. The only problem? The only team left to trade with to move ahead of the Giants was the rival Dallas Cowboys.

But, thanks to both the cornerbacks going early, Dallas was a willing trade partner and Roseman came away looking golden, still getting his guy while also keeping that extra 2022 first-round pick he acquired in the move back from six to 12. It was a big draft night win for a general manager who was in desperate need of one of those after several big misses in recent years.

Sure, Smith will still have to prove his worth on the field for this pick to truly be considered a success, but on paper it certainly looks like one. And the critics the media seem to agree.

The early returns on the pick are in, and it seems like everyone is signing Roseman's praises. Let's take a look at a dozen local and national grades for the Birds, starting with our own Jimmy Kempski, who was among those giving Philly the highest possible mark...

Jimmy Kempski: The Philadelphia Eagles have rightfully been criticized for some underwhelming drafts over the last few years, but on Day 1 of the 2021 NFL Draft, Howie Roseman and Co. absolutely crushed it.

The player they chose, Alabama WR DeVonta Smith, fills a need, will bring a competitive attitude to the locker room, and was appropriate value where the Eagles selected him. So that's all fine and good, golf claps all around. We'll see how Smith's career plays out in time.

However, it is the process that led to that selection that impressed. [...]

Had the Eagles just stayed at the sixth pick and selected Smith, it would have been an acceptable pick, though certainly not a coup. (They likely would have taken either Horn or Surtain, to be clear.)

Instead, Roseman's maneuvering netted the Eagles significantly added draft capital, in addition to a player who makes a lot of sense for their roster.  [MORE]

James Dator: The Eagles made a move to jump up to the No. 10 spot, giving up the No. 12 overall pick and their third round selection this year. Dallas had been linked to a CB for much of the draft, and seeing two go in a row likely pushed them out.

DeVonta Smith is the best receiver in this draft for my money, and a brilliant choice to give weapons to Jalen Hurts. There are concerns about his frame being too lean, or that he’s more of a generalist in an era of specialists — I don’t care. Smith is an elite player who will make noise in Philly.   [sbnation.com]

Danny Kelly: I love this pick for the Eagles, who get a true playmaking no. 1 in Smith. The Heisman winner certainly lacks size but boasts a complete skill set as a pass-catcher, combining sudden route-running, incredible catch radius, and the ability to take the top off a defense. He should perfectly complement the skill-position group in Philly, who will likely move last year’s first-rounder, Jalen Reagor, to the no. 2 role. Smith will also help open things up in the middle for tight end Dallas Goedert and running back Miles Sanders. Somewhere, Jalen Hurts is smiling.   [theringer.com]

Chad Reuter: The Eagles wanted to add Smith so badly that they gave division rival Dallas a third-round pick (No. 84 overall) to move up two spots -- getting ahead of another rival, the Giants, in the process. They received extra picks in their trade down from the sixth spot earlier this month, so giving up the mid-round pick shouldn't greatly affect the team’s roster-building ability.

I love Smith’s game and would have selected him ahead of Jaylen Waddle. Forget what the scale says: the Heisman Trophy winner is tough and reliable, as well as a huge playmaker who will have a Davante Adams-type impact at the next level. His routes are fantastic as is his body control. He can play inside or outside. This is a well-done pick.  [nfl.com]

Brandon Lee Gowton: How could I give the Eagles anything but an A? He’s the guy I wanted them to take. The belief here is that he was the best player available and it happened to coincide with a huge position of need. Smith is an absolute dog who projects to ball out in the NFL. Really couldn’t care less about his size when that hasn’t been a hindrance for him at all in the slightest thus far. He’s going to be a big weapon in this offense as a player who contributes at multiple receiver positions.

The only thing holding me back from giving the Eagles an A+ is they had to trade up to get him. I view that as the correct move, to be clear, but him falling to No. 12 would’ve warranted the perfect score... [bleedinggreennation.com]

Brent Sobleski: The Philadelphia Eagles grew impatient and somehow pulled off the unimaginable.

Philly actually executed a trade with the hated Dallas Cowboys to select Smith. We’ve apparently reached the stage of the draft where Thanos is willing to work with the Avengers.

More importantly, the Eagles leaped over yet another NFC East rival, the New York Giants, and it only cost them a third-round draft pick to get the reigning Heisman Trophy winner. [...]

The Slim Reaper can now slay the rest of the division for years to come.  [bleacherreport.com]

Ben Rolfe: A trade within the NFC East was somewhat surprising to round out the top 10 of the 2021 NFL Draft. At any rate, the selection is ideal for the Philadelphia Eagles, who need to put more talent around Jalen Hurts. WR was the top need for the Eagles on offense, and DeVonta Smith brings a lot of talent with his routes and releases. He is one of the best pure technicians to come out of college in recent years.  [profootballnetwork.com]

Vinnie Iyer: The Eagles couldn’t ignore the potential of reuniting Smith with former Alabama QB Jalen Hurts, so much so they traded with a division rival to get in front of another division rival. They did use a first-rounder on Jalen Reagor last year and have Greg Ward back for the slot, but they needed a reliable route-running No. 1 with some big-play flair for new offensive-minded head coach Nick Sirianni. Hurts, like Burrow and Tagovailoa, gets to throw to a familiar dynamic target from college.  [sportingnews.com]

Pete Prisco: They needed to get another weapon to help Jalen Hurts, so I like the pick. When the corners went off, they had to be disappointed.  [cbssports.com]

Smith was considered a top-three wideout and ultimately went third in the group behind Chase and Waddle. With the top two cornerbacks and top two wide receivers off the board, the Eagles skipped up to secure one of the top five non-QB options on their board. Plus, they spurned the Giants, their NFC East rivals, in the process.  [nj.com]

Sheil Kapadia: The reigning Heisman Trophy winner was unguardable last year, with 117 catches for 1,856 yards and 23 touchdowns. Is his 166-pound frame a concern? Sure. But Smith has shown a knack for knowing how to protect himself, and he had no durability issues (54 games in four seasons) in college going up against SEC competition. Smith’s instincts are off the charts, and coaches will love his smarts and competitiveness.

The Eagles have talked about drafting for volume. But they clearly felt like they had to get ahead of the Giants to land Smith. To do so, they had to give up a third-rounder (No. 84). This was a reasonable move for a player with an impressive track record and a high ceiling.  [theathletic.com]

Eric Edholm: With the top two corners off the board the previous two picks, this was a tough spot for the Cowboys. So they trade out with … their division rivals? Why, yes! To get ahead of the division rival Giants, of course. Philly must have thought that the Giants were dead set on Smith, sending a third-rounder to Dallas to move up two slots. Smith’s weight (170-ish pounds) will be all the talk, but his play was downright special — for most of the past three years. A fascinating pick.  [sports.yahoo.com]