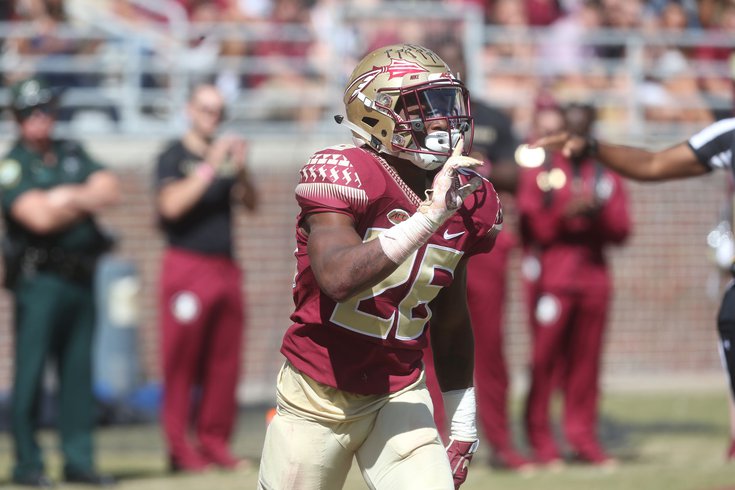 • Jeremiah Owusu-Koramoah, LB, Notre Dame: Owusu-Koramoah is an undersized linebacker with impressive athleticism, who made Bruce Feldman's 2020 freaks list. He could probably also play some safety if he had to. Kyle Crabbs of TheDraftNetwork described Owusu-Koramoah as "like Davion Taylor but with instincts," which I think is perfect. I think he projects as a more appealing version of Jeremy Chinn.

• Christian Barmore, DT, Alabama: Barmore will very likely be the first DT taken in a weak DT draft. His raw talent is obvious, and he's coming off a productive 2020 season in which he posted 8 sacks, 3 forced fumbles, and 3 batted passes in 11 games.

• Carlos Basham, DE, Wake Forest: In 2019, Basham had 57 tackles (18 for loss), 10 sacks, and three forced fumbles for Wake. He followed that up with five sacks and four(!) forced fumbles in just six games in 2020. At 6'3, 272, Basham is a thick, powerful rusher who gives off some Brandon Graham vibes, who plays on both sides, can also shift inside on obvious passing downs, and is a good run stopper. He also has a good repertoire of pass rush moves, and he's a high-energy player.

• Azeez Ojulari, DE, Georgia: Ojulari would have easily been a first-round pick if not for a reported potentially degenerative knee issue. 9.5 sacks and 4 forced fumbles in 10 games in 2020.

• Asante Samuel, CB, Florida State: Samuel had a lot of PBUs in his FSU career (29 in 31 games), and he started to get a knack for picking off passes in his final season in 2020, when he nabbed three of them in eight games. But, he's only 5'10, 180. Obviously that's not ideal for an outside corner, but like his dad, he doesn't lack for confidence, and he played outside at FSU. The inside-outside traits could be useful early on if the Eagles have Darius Slay follow No. 1 receivers like he did in 2020.

• Tyson Campbell, CB, Georgia: Campbell is something of a wildcard in this cornerback class. He has coveted length and rare athleticism. However, the results on the field haven't always matched his impressive size and athletic measurables, and there are concerns about his technique and consistency. He has all the tools, but only had 1 INT and 10 PBUs in 31 career games.

• Trevon Moehrig, S, TCU: In 2019, Moehrig had four INTs, two FFs and an impressive 11 pass breakups from his safety spot. 2 INTs and and 9 pass breakups in 2020. His ball skills and ball-hawking ability are obvious, and he is a smart deep safety who reads routes and has enough speed to get from sideline to sideline, who also has the versatility to cover from the slot.

• Elijah Moore, WR, Ole Miss: Moore had a monster 2020 season, making 86 catches for 1,193 yards and eight TDs in just eight games. He is an explosive slot receiver who can make plays down the field, or on quick hitters as an extension of the run game. This is a loaded slot receiver draft, and the Eagles could stand to upgrade on Greg Ward, but would they take one this high, especially after selecting DeVonta Smith in the first round? He's so intriguing that they might be tempted to say, "Screw it, just take him."

• Teven Jenkins, OT/OG, Oklahoma State: Jenkins has plenty of game experience both at LT and RT, and also has a couple of starts under his belt at RG. He isn't an elite athlete, but his overpowering strength has become sort of legendary in the Oklahoma State weight room. Interesting Brandon Brooks replacement candidate, with positional versatility.