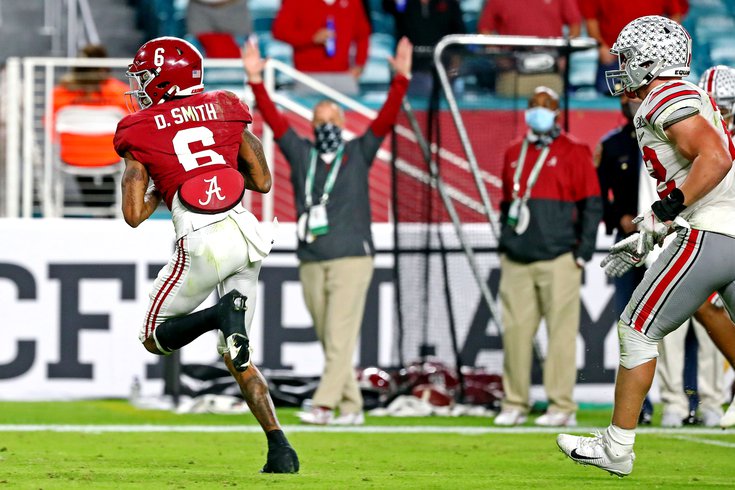 In one of the early surprises of the draft, the Eagles were able to snag Heisman Trophy winner and stud wide receiver DeVonta Smith — but they did it by trading up with their hated rivals in Dallas, making sure one of their divisional opponents couldn't take him before their pick at No. 12. The method to get there may have been a little strange, but they ultimately made a selection that pretty much everyone will be excited about.

If you watched basically any college football over the last two years, Smith was inescapable. And if you somehow missed the boat anyway, it'll be easy enough to play catch up.

You would be hard-pressed to find a guy who put together a better collection of clips than Smith did last season. You don't become the first receiver to win the Heisman Trophy in decades without some eye-popping production, and Smith dominated the college ranks even while sharing touches with a collection of first-round receivers while at Alabama.

Playing alongside Henry Ruggs, Jerry Jeudy, and Jaylen Waddle in 2019, Smith managed to lead the Crimson Tide in receiving yards and touchdowns anyway. Choosing to stay an extra year, Smith's bet on himself paid off in a big way, putting up a monster season on increased volume that ended with a statement game: 12 receptions, 215 yards and three touchdowns in the National Championship Game against Ohio State. Worth noting that those numbers did not require Smith to play a full game, as he exited with a hand injury in the second half of a blowout Bama victory.

Within that single game, you saw a lot of what allowed Smith to have a special season to close out his college career. Smith eats up yards every which way, beating opponents off of the line with excellent route running and release form while posing a YAC threat when he's used in pre-snap motion or thrown screen passes. And just for good measure, he's a home run threat at almost all times:

Smith does basically everything there is to do as a receiver with a high level of fluidity, making the game look easier than it is. He consistently came up with difficult catches in traffic against tough SEC opponents, thanks in large part due to soft hands and terrific body control. But those tough catches often weren't necessary — when Smith was able to find gaps in defenses, his long strides allowed him to glide past the final level of defense and take it to the house for six points.

It's noteworthy that the only thing people can hold against Smith is his size, which is a noteworthy concern to be sure but a giveaway of how complete he is otherwise. He can kill teams in all areas of the field, serving as your big-play threat, your first-down machine, or the gadget guy out of the backfield. He can even boost the special teams unit as a return man, another area where he shined in spite of the portfolio of talent at Alabama.

Let's be clear, there are very few lowlights for this guy from his time at Alabama. Screw it, let's throw some more highlights in here:

What do scouts think of Smith? Everyone seems to love what he brings to the table, they just can't seem to shake concerns about how his playing weight will impact his production at the pro level.

Danny Kelly of The Ringer had Smith ranked No. 6 on his pre draft big board, raving about the accolades Smith piled up at Alabama, only dinging him for strength/size concerns:

Smith has quick feet with a smooth, effortless gait—he accelerates quickly and he looks like a speed skater when he glides down the field. He can take the top off a defense and has excellent ball-tracking skills. He wins at the catch point with a combination of body control, strong hands, and springy leaping ability. He attacks the football rather than wait for it to arrive, and comes back to his quarterback when things break down. He notched just nine drops in his career. He gears down quickly to change direction as a route runner. The Crimson Tide star won’t offer much as a blocker. Smith may struggle to match up with bigger, strong corners at the next level. [Ringer]

NFL.com's Lance Zierlein is in a similar boat, and he made a fascinating cross-sport comparison, invoking the name of Golden State Warriors guard Steph Curry.

While Atlanta Falcons WR Calvin Ridley is my NFL comparison for Smith, I feel like a better comp might be Golden State Warriors superstar Steph Curry. Like Curry, Smith is thinner than you'd like and isn't the strongest player, but he has rare quickness, speed, and change-of-direction fluidity, and he creates separation from defenders seemingly at will. He possesses an elite skill level for the position and can hit the defense from short, mid-range or deep. Smith has quietly been the most complete of the receivers at Alabama over the last two seasons and will give an NFL team the ability to mismatch him against the weak links either inside or outside in coverage. He's a detailed route runner with the athletic ability to really make them count, from a separation standpoint, and his ball skills are unquestioned. Smith has the football character, athletic gifts and upper-echelon skill level to become a long-time starter and Pro Bowl regular. [NFL.com]

That last bit contains another piece of important intel that scouts and NFL personnel seem to agree on: Smith is a high-character kid who is highly unlikely to flame out because he didn't work hard enough. When you are betting on someone to overcome limitations at the next level, especially limitations that have not slowed them down yet, you'd like it to be on someone who has the awareness and desire to shed those concerns over time.

Smith seems to be that exact sort of player and person. The Eagles are getting an ultra-productive, well-regarded player at a position of need. Tough to get upset about this pick.