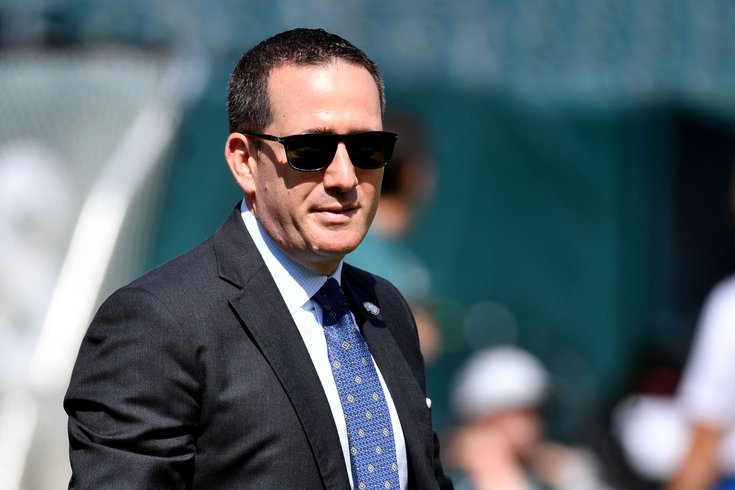 The Philadelphia Eagles have rightfully been criticized for some underwhelming drafts over the last few years, but on Day 1 of the 2021 NFL Draft, Howie Roseman and Co. absolutely crushed it.

The player they chose, Alabama WR DeVonta Smith, fills a need, will bring a competitive attitude to the locker room, and was appropriate value where the Eagles selected him. So that's all fine and good, golf claps all around. We'll see how Smith's career plays out in time.

However, it is the process that led to that selection that impressed.

Back in March, as you all recall, the Eagles traded the sixth overall pick to the Miami Dolphins for the 12th overall pick, a 2022 first-round pick, and a move up from the fifth round to the fourth round in this year's draft. In chart form:

The risk in moving back was that an elite prospect like Florida TE Kyle Pitts or a great one in LSU WR Ja'Marr Chase might be available at pick No. 6, and the Eagles would have missed out on them by moving back. My feeling was that the difference between Pitts or Chase and a guy like Smith wasn't so great that the Eagles should turn down a 2022 first-round pick, and that they made the right decision either way.

As it turned out, neither Pitts nor Chase were available anyway, as Pitts went fourth overall to the Falcons, while Chase got picked fifth overall by the Bengals. In other words, if the availability of Pitts and/or Chase would have changed the Eagles' minds on the move back, they made the right read that neither were likely to be available at pick No. 6.

As the draft unfolded, it was not going well for the Eagles, as two quarterbacks, Justin Fields and Mac Jones, began to slide, thus taking more non-quarterbacks — or more specifically the best wide receivers and cornerbacks — off of the board prior to the Eagles' pick. Chase and Pitts were gone, as were Alabama WR Jaylen Waddle (to the Dolphins at 6), South Carolina CB Jaycee Horn (to the Panthers at 8), and Patrick Surtain (to the Broncos at 9).

When the Cowboys were on the clock at pick No. 10, the Eagles' chances at landing the remaining wide receiver worthy of a top selection (Smith) were in doubt. The Giants were sitting at pick No. 11, and while they are already strong at wide receiver, they were heavily rumored to be interested in Smith.

The Eagles were prepared. With Dallas in desperate need of help at cornerback and the top two corners gone, the Eagles were able to trade up with the Cowboys ahead of the Giants to land their guy. The cost was the second of the Eagles' two third-round picks (84th overall), a reasonable cost to ensure the selection of likely the last slam dunk first round target on their board.

Again, the Eagles' read was very likely right that the Giants would have taken Smith, as evidenced by their subsequent trade out of the 11th pick, and eventual selection of another receiver, Florida's Kadarius Toney, at pick No. 20.

Had the Eagles just stayed at the sixth pick and selected Smith, it would have been an acceptable pick, though certainly not a coup. (They likely would have taken either Horn or Surtain, to be clear.)

Instead, Roseman's maneuvering netted the Eagles significantly added draft capital, in addition to a player who makes a lot of sense for their roster. A snapshot of what the Eagles gained and lost, from the time they owned the No. 6 pick, until now: