John McMullen: A tricky trade nets a playmaker and a potential pitfall for the Eagles 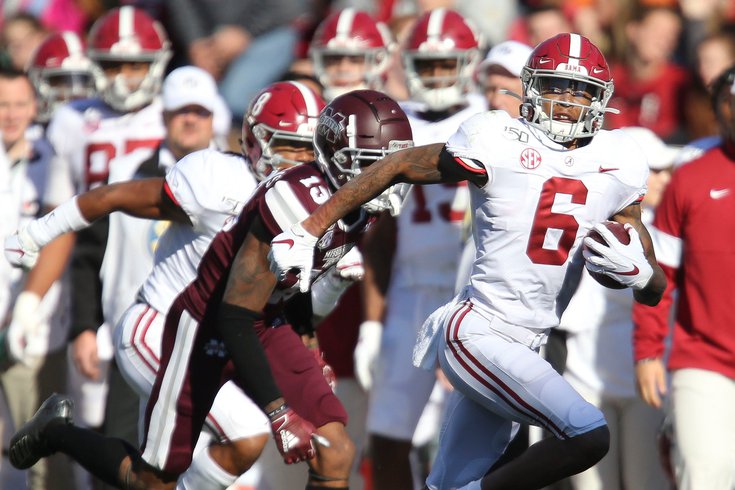 The Eagles and Cowboys rivalry didn't exactly need an accelerant thrown onto the fire, but there may have been at least a little lighter fuel added on Thursday night when the two NFC East teams decided to work together against a common enemy.

On one night in April, at least for both the Birds and the 'Boys, the enemy of an enemy fostered a friendship — with the odd man out being the New York Giants.

The crux of the dilemma developed earlier when the Eagles dropped from No. 6 to 12 overall in the 2021 NFL Draft, setting up three consecutive selections for NFC East teams with Dallas and the Eagles sandwiching the Giants.

The thought around the league was that the Cowboys and Eagles were both interested in the top cornerbacks, Alabama's Patrick Surtain and South Carolina's Jaycee Horn, with the latter, somewhat surprisingly being the first defender off the board when the Panthers kept Horn in the Carolinas at No. 8 overall.

From there Denver, having acquired veteran quarterback Teddy Bridgewater earlier in the week, eschewed the game's most important position and Justin Fields by selecting Surtain, leaving both Dallas and Philadelphia looking at their Plan B's.

The Cowboys were in the position of strength with Penn State linebacker Micah Parsons the next chess move for them with two teams behind them, the Giants and the Eagles, zoning in on stud Alabama receiver Devonta Smith, the Heisman Trophy winner coming off perhaps the greatest season for a receiver in college football history.

By moving back two slots, Dallas was still able to get the player they wanted in Parsons, while also adding the 84th overall pick from the Eagles.

Philadelphia, meanwhile, got its man in Smith by jumping the Giants, who ultimately traded down themselves and ultimately took a poor facsimile of Smith in Florida WR Kadarius Toney at No. 20 overall as a consolation prize.

Howie Roseman admitted there is always a premium paid in these types of circumstances, however.

"I think the first part about us trading up is obviously the more you trade up in the round the more you're going to have to give up. By the same token, when you trade in the division you understand that you're not going to get any value to that either," the Eagles GM admitted. "It's going to have to work for them as well."

It certainly worked for the Cowboys, who were taking Parsons at No. 10 anyway and still got him at 12 while also snaring the extra third-round selection.

Paying that premium to go up two spots only matters to the Eagles if Smith isn't the player he's supposed to be, however. So that part of the maneuvering is palatable.

When you add in the divisional aspect of the deal, another layer of potential peril emerges for both sides of the equation that simply doesn't exist if the move is made with a non-rival.

The Eagles and Cowboys will be playing each other two times every year in perpetuity and that means Philadelphia will have to deal with Parsons and Dallas will need to contend with Smith for the foreseeable future. The headlines are obvious if one or the other dominates in the series — and they will all point back to this trade.

Confidence in one's evaluation is admirable but working a deal with the Panthers or Broncos would have eliminated the added complication to this trade.

Smith was important enough to the Eagles to roll the dice twice, on the player himself and the potential of the Parsons pitfall somewhere down the line.

"I think when you're dealing with the draft, you’ve got to do what's best for your team, and obviously they thought this was the best move for their team and that's why they did it," explained Roseman. "They got who they wanted, and we got who we wanted, and it's always been a good relationship. It's respect for their organization and certainly Mr. Jones, Jerry, and Steven.

"We have a lot of respect for them as well, competing against them."

Make sure to subscribe to the JAKIB Media YouTube page for over 50 hours of NFL Draft coverage featuring Derrick Gunn, The Middle with Eytan Shander, Harry Mayes, and Barrett Brooks, and BIRDS 365 with Jody McDonald and John McMullen.

You can also watch extensive coverage live on PhillyVoice.com on Thursday and Friday and on-demand at YouTube.com/JAKIBMediaSports all presented by IBEW LOCAL 98.

Throughout the draft on JAKIB Media's YouTube channel, Derrick Gunn will go live with his "Draft Takes" after each and every Eagles pick plus reaction from Eytan and Harry, the BIRDS 365 guys, and Big Daddy Graham with Philly's biggest fan Johnny Doc.