John McMullen: Jeffrey Lurie has pressed pause on his own evolution 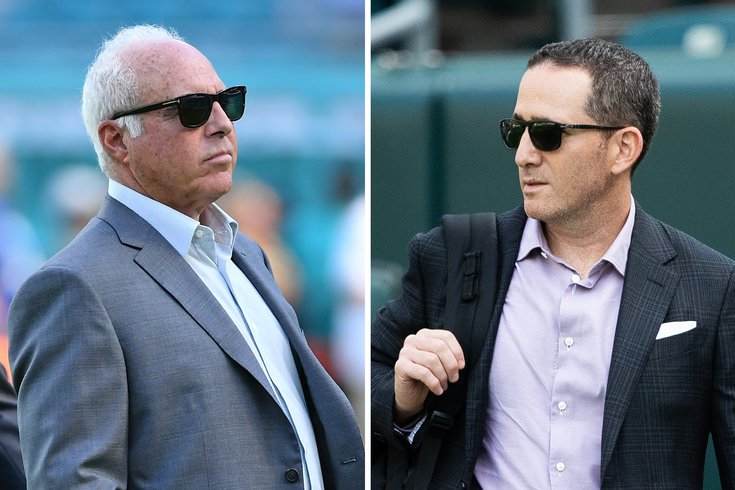 Jeffrey Lurie typically has a firm grasp of the evolution of the NFL, something evidenced by his embrace of analytics and his targeted effort to stock the new coaching staff with youth and energy.

The minute you’re standing still in a competitive industry you’re falling behind and a man set to turn 70 in September is very cognizant of the trends in his particular business.

Everyone has blind spots, however.

The Eagles owner’s inability to see is steeped in the way he likes to run his team and obfuscated by the belief that a seemingly innocuous, almost altruistic method could ever result in unintended consequences that are negative.

In the wake of Chip Kelly’s poisonous end, Lurie’s intent to take back his team and hand football operations back to Howie Roseman came with one catch, everything had to be collaborative — no edicts coming from another dictator in a different suit.

The early returns were fabulous and resulted in a Super Bowl LII championship, further emboldening Lurie to believe his path was the correct one.

From there, though, the Eagles have been standing still as others have blown by and there are so many cooks in the Philadelphia kitchen when it comes to building the roster that the fingers point when individual decisions go awry.

Last year with COVID-19 impacting in-person meetings the football side of the building was surprised by a number of draft selections compared to the way the organizational draft board was set up.

And that led to stories of Deep State conspiracies whether they were Roseman filtering information with only his end-game in mind, to steer Lurie in a certain direction or VP of Football Strategy Alec Halaby gaining the owner’s ear.

The Athletic’s revelation that former coach Doug Pederson dressed down Halaby at one point probably best described the disconnect of those who were supposed to be collaborating.

Former NFL general manager Mike Lombardi, who worked for Lurie and the organization in 1998 as director of pro personnel, noted that Lurie is what the owner says he is, a guy who asks a lot of questions, welcomes opinions, and wants to hear every side of any argument.

For an analytical guy like Lurie, the more information he has before making a franchise-altering decision could never be a bad thing.

“People perceive it mostly as a negative and I don't know why,” former Eagles QB Ron Jaworski told me on BIRDS 365 powered by PhillyVoice.com and JAKIB Media when discussing Lurie’s involvement.

Jaworski himself owned the Philadelphia Soul of the Arena Football League and has often consulted with Lurie on major decisions with the Eagles, most notably the Pederson hiring in 2016.

“I think an owner involved is very good,” said Jaworski. “My personal feelings and you know I was on the committee to select Doug Pederson so I sat in those meetings, I helped conduct the interviews. From my perspective, you look at what Jeffrey and how we have done and we made that hiring that worked out great.”

Jaworkski’s belief is that the current narrative of Lurie being overbearing is a bit overblown.

There is unquestionably a problem, though, and maybe the best metaphor to describe it rests in modern journalism practices that have turned at least some in the legacy media into activists cloaked as information gatherers. In other words, if you have an agenda you’re not offering up any information without spin.

The NovaCare Complex has too many activists right now, hoping to push their agendas and even worse, happy to leak the company secrets when conflicting ideologies fail.

According to Lombardi, “Lurie is an example of good intentions with horrible results.”

The assumption of more voices and more ideas providing more avenues to a correct answer is a good one in a vacuum when you completely ignore human nature.

That thesis might even be difficult to understand until you've lived it and seen the power brokers who want to check employees' phones for potential whistleblowers dying to throw someone under the bus for a perceived failed draft pick.

The unintended consequence with the Eagles and personnel is too much noise pulling Lurie in multiple directions. And instead of unearthing an answer, the owner has created a bloated system that needs multiple conflict resolutions before it even gets to the main event.

One of the things that perplexed people when it came to the struggles of Pederson’s post-Super Bowl offenses was the annual need to simplify things late after the early results weren’t positive.

‘Why not just keep it simple?’ many mused.

In that same vein maybe it’s time for Lurie to apply the KISS principle [Keep it simple, stupid] to his front office.

Think of it like the plumber trying to find a leak in the pipe by flushing it out. Transparency by the Eagles to those outside NovaCare is abhorrent but the far bigger problem is that transparency is just as murky inside.

The time has come to clean that up with a clearly defined flow chart. Simply have the recommendations of both the analytics and scouting departments flow up to Roseman, and allow the GM to make the final decision without any thumbs put on the scale by the owner.

Just maybe you’ll root out any issues and the best-case scenario is everything works so smoothly that the 2021 draft is a great success and you really have the GM factory you think you do.

It’s time for the Eagles to keep it that simple.