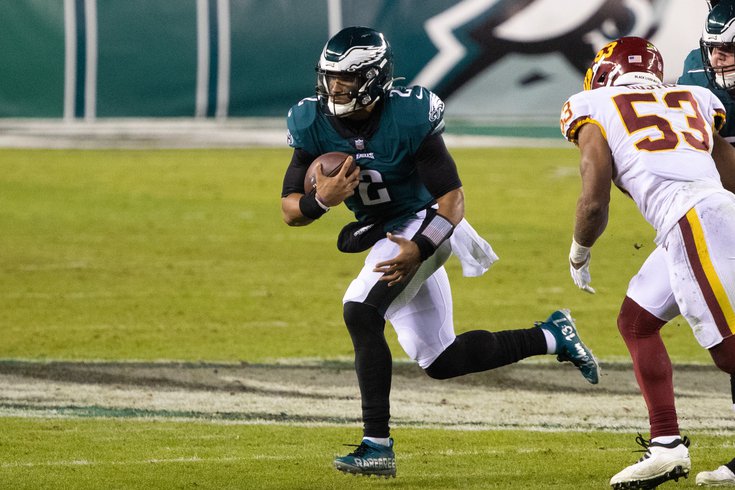 Jalen Hurts has the 16th best chances of winning the NFL's MVP award, according to one oddsmaker.

If some of those win totals look a little high, keep in mind that they are now based on a 17-game schedule.

Of course, of high importance to Eagles fans in 2021 is where the Colts and Dolphins will finish this year, since the Eagles own the Dolphins' and (maybe) the Colts' first-round picks in 2022. Should the 2021 season play out like the over-unders above (spoiler: it won't), then the Eagles' first-round picks next year would fall in the following ranges:

It feels unlikely that the Eagles will have the third-worst record in the NFL. Yes, they'll very likely be bad, but as we noted last week, they also have the easiest schedule in the NFL, based on 2020 records. Their 2021 opponents had a combined record of 117-155 (0.430), with a combined point differential of -554. They only have three games against teams that had winning records in 2020, none of which are on the road.

The Dolphins, meanwhile, feel a little overvalued at 9 wins. Tua Tagovailoa looked shaky as a rookie, and while the Dolphins have a decent enough roster otherwise and they managed to win 10 games a year ago, they did so mainly on the strength of a defensive scheme that confused opposing offenses. There's perhaps some logic in the notion that the Dolphins' defense won't surprise offenses quite as effectively in 2021.

The Colts' win total over-under sits at 10 games, one fewer than they won a season ago, when they went 11-5. That feels about right.

As far as the Eagles' chances of winning the division, the odds look like this:

In case you're unaware of what that means, if you bet $100 on the Eagles to win the division, you would win $500 if they did. As you can see, the Cowboys are currently the favorites. They're tied with two other teams for the fifth-best odds of representing the NFC in the Super Bowl, at +1300.

Interestingly, Jalen Hurts has the 16th best odds of winning the NFL's Most Valuable Player Award. I can't say I like those odds. Hurts is one spot behind... drumroll... Carson Wentz.

I can't say I like Wentz's odds much better.