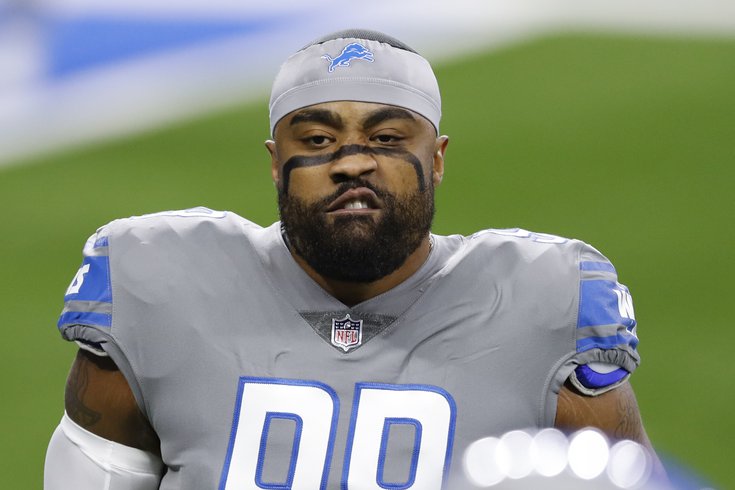 Everson Griffen to the Eagles? It's not the worst fit in the world...

One of the least talked about needs for the Eagles as they head into the 2021 NFL Draft is at defensive end.

It's a very important position for any football team, and Philly currently lacks a ton of depth there. Which means it's more than likely they draft at least one or two edge rushers in the draft in two weeks — though fans are hoping it's not with the No. 12 overall pick, where there are some household names expected to still be available at positions like receiver and cornerback.

However, the team does have a little bit of cap room left — and it could have more if it decides to trade away Zach Ertz.

Would they be motivated enough to sign a free agent pass rusher as the offseason slowly continues on? Here's a look at the current DE depth chart, according to Jimmy Kempski, who calls the position the Eagles' third biggest area of need:

There are some big names and former stars on the market right now, like former Charger Melvin Ingram and former WFT player Ryan Kerrigan. Those two may not make the most sense as their price tags are relatively high even at this late stage in free agency. But there are some guys who may be interested in signing a prove it deal, with a lot more money likely available to any player who has a good 2021 a year from now in 2022, when the salary cap goes way back up.

Here are five such defensive ends:

Houston is likely to be one of the pricier options we discuss — he is coming off a deal that paid him $24 million over the last two seasons — but he is older now, 32, and with the market completely stalled, he may be motivated to take a little less to get a chance this next season.

There is a coaching connection to Jonathan Gannon, who was a defensive coach alongside Houston in Indianapolis where Houston had 19 combined sacks over his two year stay there, along with two forced fumbles and 69 total tackles. The Eagles could use some insurance for their top two guys, and a rotational veteran who can help spell Graham, who too is on the wrong side of 30. The Eagles are unlikely to make a splash, with little chance of contending in 2021, but the familiarity is there and the longer he remains unsigned the more value a buying team could get.

Here's another player with a connection to Gannon, who coached the Vikings (defensive backs) while Griffen was starring there, though not directly, he surely has knowledge of Griffen's talents, strengths and weaknesses. He also could have a little insight as to how best to manage what could be described as a risky personality addition to the locker room (he's had some off the field issues over his career)..

The 33-year-old is a perfect situational pass rusher for the Eagles, and had a respectable six sacks last year playing in 50% of Detroit's defensive snaps. But more importantly, Griffen could be more affordable than some of the other options on this list, having signed a $6 million last year with the Lions that carried just a $3.5 million cap hit. Something like that would be pretty appealing to Philadelphia, and Griffen has in the past shown interest in signing here.

Okafor is a pass rusher who is probably a tier below the above options, having collected more than five sacks only once in his career when he had eight back in 2014. At 30, the former Chief is coming off a down year in Kansas City where he only appeared in 11 games and had just three sacks, 16 tackles and one forced fumble.

If Okafor can be gotten on a cheap prove it deal he makes sense in Philly, where he can be a leader in the locker room after being a part of two Super Bowl runs under Andy Reid.

He's another affordable option — starting just twice but playing in 15 games and 38% of snaps in Cleveland last year, Clayborn is a former first round pick who at 33 will be looking to prove he has something left in the tank. Clayborn can be a disruptor at times, as he has combined for three forced fumbles and 7.5 sacks over the last two seasons in a reserve role.

He has 11 career forced fumbles and 41 sacks since 2011, and has also played in eight playoff games and has a ring with the Patriots from 2018. The Eagles need mentors for the bevy of draft picks they're about to collect and Clayborn could help Graham lead in the locker room.

Hunt hails from Estonia — which is kind of cool — and is a beast of a human being at 6-foot-8, 295 pounds. He's played for Gannon in Indy, and starred against the Eagles back in 2018 when he had four tackles, a sack and forced fumble and recovery against the Birds — which may paint him in a desirable light for the Eagles front office.

Hunt is not a big sack guy, his career high is just five. But he is a talented and huge body who would find a role in certain situations along Philly's d-line, at what is likely to be a very affordable rate.