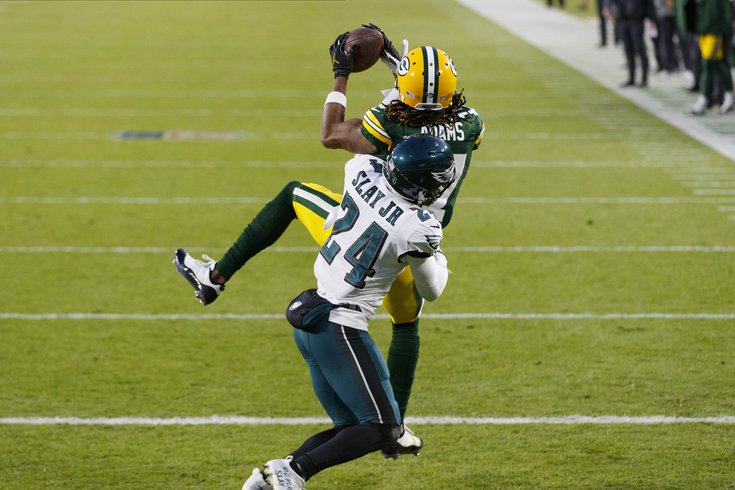 Back in February, well before the start of free agency, we ranked the Philadelphia Eagles' offseason needs, from most glaring to most stable. Now that we have seen how free agency has played out, and other moves, such as the Birds' move back from the sixth overall pick to pick No. 12, we'll re-rank their biggest needs, specifically in the 2021 draft.

Analysis: I mean, just look at the depth chart above. On second thought, it's safer to not look directly at it. The Eagles could still add a corner off the street between now and the start of the draft, but once you're more than a month deep into free agency, that guy won't be an answer in any way, obviously.

The Eagles desperately need a corner opposite Darius Slay, and in reality, they'll soon need a second outside corner to replace Slay.

Analysis: It was clear last year that the Eagles were going to draft multiple receivers. That's not necessarily the case this year because they do at least have a lot of young receivers who in theory can continue to develop, but it does feel pretty likely that they'll take one with either of their first two picks. And they can't afford to miss... again.

Analysis: To begin, the Eagles only have five DEs on the roster, and one of them is the international guy who doesn't really even count toward a roster spot. But beyond their sheer lack of numbers, Graham is aging, while Barnett and Sweat are both in contract years. Spoiler: The Eagles are going to draft at least one DE.

Analysis: After Cox and Hargrave, the Eagles have an injury-prone Ridgeway, and a pair of fringe roster-worthy players in McGill and Williams. They need depth.

To note, this is a terrible DT draft.

Analysis: Jason Kelce remains a retirement candidate every offseason, and Brandon Brooks is getting up there in age. Jack Driscoll is more useful to the Eagles at OT, and Nate Herbig is better suited as a backup than a starter. The Eagles need to find a future starting iOL, whether that be at guard or center.

Analysis: Wilson was a perfectly fine signing, and Singleton was a huge improvement over Nate Gerry last season after Gerry went down, but let's not kid ourselves into thinking that this is an ideal set of linebackers.

Analysis: Ertz remains extremely likely to play elsewhere in 2021. Ertz and Goedert aside, the Eagles just have a bunch of developmental guys. The return of DickRod still feels like a decent bet, but it would also make sense for the Eagles to add a Day 3 guy to become a legit No. 2 opposite Goedert in 2022 and beyond.

Analysis: Back in February, after they dealt Carson Wentz, the Eagles only had one quarterback on the roster (Hurts). And so, there was as obvious a need for addressing that position as any, hence the No. 1 ranking back then.

Since February, the Eagles overpaid Flacco in free agency, and moved back from pick No. 6 to pick No. 12, thus severely reducing the chances they were going to select a quarterback in the first round.

The Eagles could take a QB on Day 3, with the intention of developing him into a capable backup. Taking one on Day 2 would, uh, make people very upset, I think.

But for now, it looks like the Eagles will play "wait and see" with Hurts in 2021, and they'll put off a more definitive decision at quarterback until 2022.

Analysis: Most NFL teams would gladly trade their OT personnel for the Eagles'.

Analysis: The Eagles signed two veterans in free agency, so they feel unlikely to invest any real resources into the position in the draft.

*The Eagles did draft Roynell Young in 1980, who started his career as a corner, and later moved to safety. Also, as many of the commenters are aware, when I was a young lad I had a stuffed animal seal named Roynell, named after Roynell Young. I loved Roynell the Seal, and he loved me, and we didn't care who knew.

Analysis: The Eagles should definitely draft a punter (or at least sign a UDFA) so I have a competition to cover in training camp. Otherwise, while Jake Elliott struggled in 2020, he's not going anywhere.