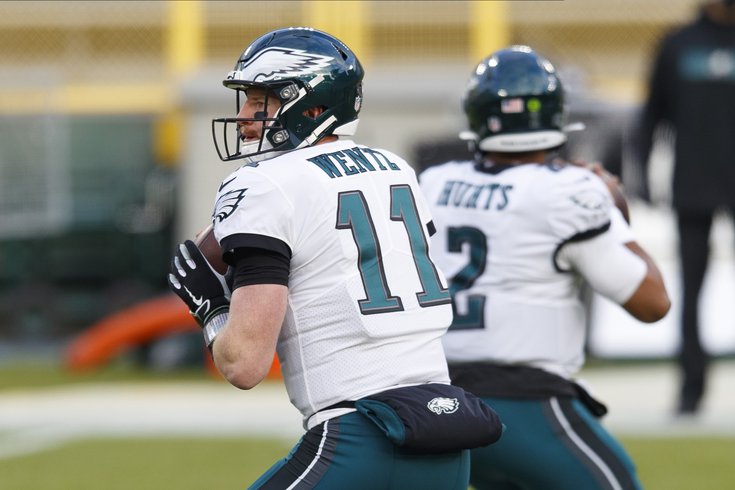 The Eagles took Carson Wentz with the No. 2 overall pick in the 2016 NFL Draft.

Carson Wentz may no longer be the Eagles' franchise quarterback, but Philly fans are ready and willing to defend him and the organization when they feel both are being unfairly criticized.

NFL reporter Dov Kleiman posted Wednesday a Twitter thread of flashbacks to the 2016 NFL Draft. Among the tweets was the following with the caption "This didn't work out too well…"

The tweet included photos of Wentz shaking hands with Commissioner Roger Goodell after being drafted by the Eagles and what the team sent to the Cleveland Browns in order to trade up and select the former North Dakota State quarterback with the No. 2 overall pick that year.

This didn't work out too well.. pic.twitter.com/flw0Bz3vj3

But Kleiman's tweet didn't really catch fire until Thursday with many Eagles fans and some media members who did not agree with his assessment.

[WARNING: Some of the tweets below include explicit language.]

The Eagles literally won the Super Bowl mostly due to how well Wentz played. If I could make a trade like that again this year and get another SB in 2 years I would. https://t.co/7oTAqWhxGh

The. Eagles. Don’t. Win. The. Superbowl. Without. Carson. Wentz. https://t.co/dl9LHCrXpu

I am a total wentz hater after what he pulled this year but it is totally asinine to say we might have won the SB without him, or that the trade up to get him didn’t work out. We don’t win the bowl without wentz, end of story.

So as far as I can tell, the Browns ended up drafting 10 guys with picks that can be traced back to the Wentz deal.

- Six aren't in the league
- One is on a practice squad
- One got dealt for a 7th
- The other two are Denzel Ward and Jabrill Peppers https://t.co/5ggwE7lyAo

The Eagles literally got a Super Bowl out of Wentz??? https://t.co/9nD73pZdkZ

It worked out just fine. https://t.co/pJmATfhfZL

Respectfully, there is almost no way the Eagles have a Super Bowl without Wentz's contributions that season.

The Eagles won a super bowl and the Rams went to one. It wasn’t all bad. https://t.co/E5wdXoVfkh

I just don’t get the revisionist history. Eagles don’t win the 2017 Super Bowl without Wentz. Don’t confuse the team being a shit show now with that trade not working out for the team.

There's a whole lot of Carson Wentz haters out there who are going to be doing some major backpedaling over the next 48 hours.

To Kleiman's credit, he didn't back down from the widespread criticism, as he defended his position with users who were not happy with his take.

He had other chances playing in the playoffs and they didn't win with him.

Meanwhile, there's no reason to think Nick Foles doesn't also make the playoffs with them and that defense and does what he actually did, which is winning the Super Bowl. Wentz didn't.

The QB didn't need to play like an MVP candidate for them to win. Nick Foles still scored 41 points on the Patriots in the biggest game of the season and the defense was top 5.

Also, turns out that one Wentz season was an outlier and he's not even on the Eagles anymore.

For everything they paid, a part-time QB for that one season isn't enough. Nick Foles probably also takes them to the playoffs and we saw what happened when he did.

Also, who said it was even necessary? Nick Foles killed it in the final two playoff games that year. A year later he won another playoff game against the Bears and even nearly beat the Saints.

Who's to say it was *necessary* for them to have a bye week.

You really can't say that. The Eagles and their top 5 defense won the Super Bowl with Nick Foles, not Wentz [he posted 38-7 win in the NFCC game and scored 41 over Pats in the SB] - Wentz didn't play on those playoffs. Can't say they weren't making the playoffs with Foles.

Who's to say it was necessary for the Eagles to have a bye week to win the Super Bowl? Foles proved he was capable in the two biggest games of the season. Maybe he also gets a bye that season, we can't know that.

Nick Foles was literally an Alshon Jeffery drop away from going at least 5-0 with the Eagles in the playoffs, to say he needed Wentz to play well is pretty ridiculous and taking away massive credit from him.

He won that Super Bowl/Playoff games, no Wentz, bye week aside.

It's helpful, but who's to say Foles couldn't have gotten it as well?

Wentz isn't even on the roster anymore.

And they didn't trade all those picks for Foles, it was for Wentz.

They did give up all those firsts round picks/2nd/other for Wentz, and now the state of their roster is poor.

That's the problem with it.

I understand you want to give all the credit to Wentz for the 2017 SB, I agree he deserves some credit, but not half since he didn't play in those playoff games/won that Super Bowl.

You believe it was worth it for that one season's contribution [setting up bye week], I don't

You mean like when he took the Eagle to the playoffs in 2013? or when he won a playoff game in 2018 and nearly another that season aswell?

Lets not pretend like Nick Foles never took the Eagles anywhere. Wentz had one career completion in his playoff career.

To say Nick Foles couldn't have also taken the Eagles to the playoff that season [even if it's not an MVP type season], like he previously did in his career, is also disingenuous.

They are a "shit show" now partly because of all the picks they gave up for Wentz. Wentz isn't even on the team, the roster is still bad and he didn't even play in the 2017 playoffs.

To give him all the credit for the SB win cuz he help set up a bye week doesn't make sense to me https://t.co/H96hYvZAUL

What do you mean "set up everything on a silver platter"? - he helped the team set up one less game, that's it. Foles still played 3 playoff games, winning the Super Bowl MVP, putting 41 on Belichick's defense.

Foles already took the Eagles to the playoffs in his career.

He was also 4-1 in the playoffs from 2017-2018 with them, winning Super MVP and a Jeffery drop away from possibly beating the Saints to go 5-0 in the playoffs.

Can't say they don't make the playoffs with him [again]

Kleiman's point is understandable. The Eagles did give up a lot to draft Wentz, only for the former All-Pro to want out of Philadelphia five years later and after signing a massive contract extension in 2019. That's not a great look when examining things with a long-term view.

Not to mention, Wentz suffered a concussion and had to leave early from the only playoff game he ever suited up in for the Eagles, a Wild Card round loss at home against the Seahawks. Meanwhile, Nick Foles left Philly with four playoff wins in two years and has his own statue outside of Lincoln Financial Field.

But ask Eagles fans anywhere across the Philly region and most will tell you that they have no regrets. If given the choice, most Eagles fans would trade up and take Wentz again.

Maybe the fanbase and the franchise will not reap the full long-term benefits of the trade, but the short-term benefits are crystal clear: it helped bring the city its first Super Bowl title after impatiently waiting for 52 years. Earning the Lombardi Trophy was enough to deem the trade a success.

Foles deserved to be the Super Bowl MVP and had a tremendous playoff run that year. Every adjustment made and button pushed by the coaching staff that season worked to perfection. Outside of getting destroyed by Tom Brady and the Patriots' offense in the Super Bowl, the defense was outstanding.

But the Eagles would not have gotten to where they did in 2017 without Wentz. If the season stopped after Week 14, Wentz would have been the league MVP. He wasn't just the best quarterback in the NFL that season; he was arguably the league's best player through 13 games.

It was Wentz's elite play in the regular season that laid the groundwork for Foles to be successful in the playoffs. And for as beloved as Foles still is and forever will be in Philadelphia, it's hard to imagine he would have been as good and effective as Wentz over the entire regular season.

Even though Wentz has moved on and is now under center for the Indianapolis Colts, it does not appear that debates over Wentz's legacy in Philadelphia will be stopping anytime soon.