Another day, another Watson-to-Eagles report is making the rounds. Let's discuss... 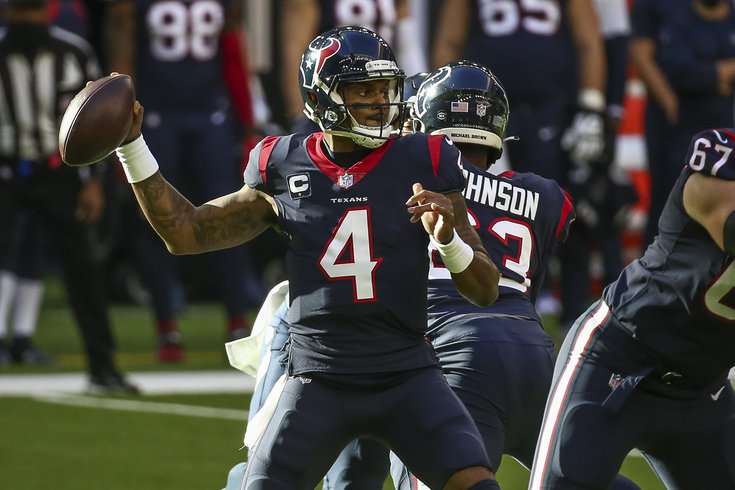 It's beginning get like that scene in the second Austin Powers movie — timely reference, I know — where Mike Myers' stuck-in-time character is trying to kill a would-be assassin and she just won't die, no matter what he throws at her. Not even diving out of a window can stop her. She simply won't die.

That's what this Deshaun Watson-Eagles rumor has become. It seems ridiculous — and we're no strangers to the Birds being tossed in trade rumors to help spark some added interest — but it just won't go away.

It seems like each day there's a new report linking the Birds to the embattled Texans quarterback, saying in a different way that the team is interested in acquiring the 25-year-old QB in a trade. And we would know — this is our fifth different story about the rumor in the last four weeks. Don't believe me? Let's take a quick trip down memory lane...

• March 22: Aaron Wilson of The Houston Chronicle lists the Eagles among six teams keeping an eye on Watson

• APRIL 9: On the heels of another report from Wilson two days prior, this one listing the Eagles as one of two teams still in on Watson, ProFootballTalk's Mike Florio says the Eagles are going to pursue the QB once his legal issues are resolved

And now, just a few days after the most recent reports, we're writing about Watson again. Why? Because we have a new rumor, of course, this one coming from yet another media outlet (Sports Illustrated).

Here's more from SI.com's Mike Fisher, who says that according to a source the Eagles and Texans could still get together on a Watson trade despite the QB's ongoing legal issues that have nearly two dozen massage therapists suing Watson over alleged unwanted sexual advances (and in some cases worse).

The Philadelphia Eagles are trying to find a direction. So are the Houston Texans. And according to an NFL source, despite their various issues, the two teams could still get together on a Deshaun Watson trade.

Watson is of course buried in legal troubles that are completely separate from his trade request - a request that we know GM Nick Caserio grew increasingly amenable to until the flood of sexual assault charges against the star QB.

Meanwhile, the Eagles are trying to straighten themselves out as well, having traded away Carson Wentz with a tentative plan to hand their QB job to young Jalen Hurts - except that our source insists that Philadelphia's desire to secure Watson remains in place.  [si.com]

Obviously, it's strange to speculate about Watson's future given the great deal of uncertainty over the more than 20 civil suits filed against him that, among other things, accuse him of sexual assault. Sure, Watson could settle those suits out of court in the not-so-distant future, but this could also drag on throughout the summer and potentially longer, especially if these civil cases lead to criminal ones.

But that's what makes the Eagles' reported interest so noteworthy. Even with all of this swirling around Watson, we now have at least five different writers all reporting that the Birds are looking to upgrade their quarterback position by trading for Watson. And as we wrote late last week, where there's smoke, there's often fire, so it's getting harder and harder to ignore, even if we wanted to.

As we highlighted above, we have plenty of outlets — ranging from national to local (in both cities) — linking the two sides, some of the more interesting stuff from Fisher had to do with the potential timing and cost of a trade.

Originally, this was looking like it would be "a pre-NFL Draft bidding war" for Watson, according to Fisher, and that would've played right into the Eagles hands, as they own more picks than anyone else in the 2021 NFL Draft. But with the legal issues hanging over Watson's head, that's causing not only the bidding to dry up, but it's also driving the potential cost down. And it could push the trade back a bit.

Before the accusations, an asking price of three first-round picks (plus some more) seemed to be reasonable, as the Texans needed draft ammo to help the rebuild that would surely follow Watson's departure. Now, there's no way the Texans get that until Watson's name is cleared — or at least until an acquiring team can get some closure on the civil, criminal and league implications of Watson's current legal issues.

In other words, a trade probably wouldn't get done before this year's draft — unless a team is willing to take a big risk — meaning any picks attached would have to be for the 2022 draft or beyond. And that might actually be music to Howie Roseman's ears.

Why? Because after trading away Carson Wentz and trading back from the sixth to 12th spot in this month's draft, the Eagles are in a position to have as many as three first-round picks in 2022. And if the price remains lower for Watson, they could theoretically acquire him in a trade and still have at least one first-round pick next year. They'll need those picks as they undergo a rebuild of their own, and while Watson would certainly accelerate any rebuild, the team still has plenty of holes to fill and lacks young talent on its roster after limited picks in 2018 and 2019 coupled with some big draft misses.

MORE: Report: NFL insiders believe Eagles are looking to draft a QB as insurance or competition for Jalen Hurts

Combine that with the Eagles having a young, unproven quarterback in Jalen Hurts who they clearly like but don't appear to be sold on just yet, and the Eagles become uniquely suited to acquire a player like Watson, who could be forced to miss time with a suspension. Here's more from Fisher...

That trade could be executed any time after this draft, with Houston moving on to Tyrod Taylor as the starter, enduring one more empty-cupboard season but then "owning'' the 2022 NFL Draft. It could also be executed in a way that for Philadelphia comes a) cheaper than it otherwise would have, b) with Hurts still the starter should Watson be suspended for part of the 2021 season and c) maybe with contingencies attached to the picks, just as the Wentz trade has attached.

Watson would be a massive upgrade on nearly any team in the NFL — only a handful of quarterbacks are better — but that's only part of the discussion here. And, in fact, it's really become a secondary aspect of all these trade rumors.

And no, we're not talking about how the Eagles could possibly fit Watson's monster contract onto their books.

Obviously, it goes without saying that there's an entirely different calculation that needs to take place regarding whether the Eagles — or any other team, for that matter — should employ a player who is accused of being a serial sexual predator. Watson and his lawyers have so far vehemently denied all the allegations, but depending on how this plays out — especially if it grows into a criminal case — the Eagles will need to reckon with all this, especially since you'd be making Watson the face of your franchise.

Right now, there's no way of knowing how all this plays out, but it's definitely worth monitoring for Eagles fans. After all, it's only a matter of time before there's another rumor linking the Birds to Watson.

Oh, man. That was definitely the better reference.