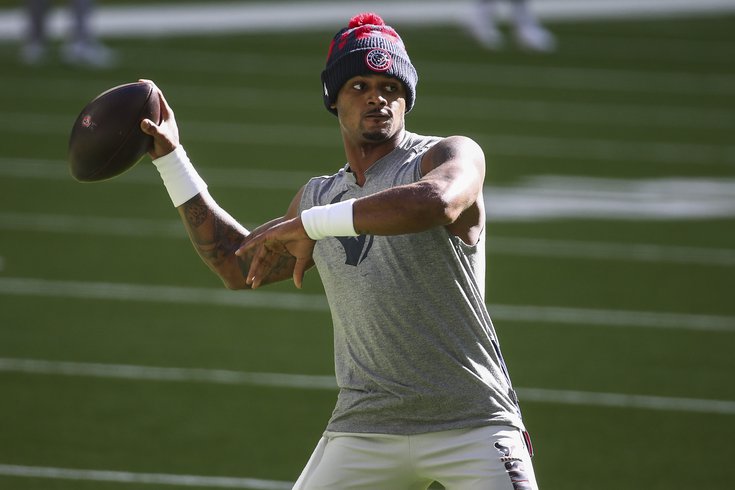 The Eagles have been quiet. A little too quiet.

We're through two days of legal tampering — with NFL free agency set to officially open today at 4 p.m. — and Philadelphia has yet to show up to the party. It's not exactly as if Eagles GM Howie Roseman is known for sitting still, standing pat and doing nothing. The Birds, who are now under the salary cap threshold ahead of the NFL's official New Year, have yet to do anything in free agency. They have seen players who made sense sign with other teams, and have watched pretty much every serviceable quarterback sign elsewhere, leaving them with Jalen Hurts and nothing else.

But that could be by design. If you want to believe that a miracle is possible, be sure to take a look at a story that came out late Tuesday, alleging that the Eagles are plotting something — something spectacular.

Do not discount the Philadelphia Eagles as a strong suitor for Deshaun Watson. Too many sources with ties to ownership have whispered that sentiment my way for me to ignore.

And the more you think about it, the more sense it makes. The more you wonder why you hadn't explored the avenue sooner. The more you ponder why more isn't being reported on this front. Because crazier things have happened in the league, by a long shot.  [CBS Sports]

Jason La Canfora goes on to rip off a bevy of believable reasons why a trade by the Eagles for Texans superstar quarterback Deshaun Watson can work.

• The Eagles are an extremely aggressive team when it comes to trades.

"I hear that it is very much at the ownership level," as one league source put it.

"No action for the Eagles," one GM said. "It has to be killing them."

Another GM said: "Would Howie trading for Watson surprise me? No. Now that you mention it."  [CBS Sports]

• The Eagles have four of the top 85 picks in the draft, with 11 total. They also have a potential second first-rounder coming in 2022 for Carson Wentz. They certainly have some ammunition.

• You may be asking yourself, "how the heck can the Eagles afford Watson?" The Eagles, of course, have spent the better part of the last month shedding salaries and re-structuring deals, trying to become cap complaint. But the structure of Watson's contract actually makes him attainable. He's set to have a relatively reasonable $15.9 million cap hit in 2021, before it balloons to over $40 million in 2022. By that point. Wentz' contract will be off the Eagles' books and the cap is expected to go up anyway.

• The Texans need to reload, and Watson has been hoping to be traded away from Houston all offseason while the Texans are steadfast that they are not even shopping him. If Roseman blows them away with an offer highlighting the 6th overall pick and some of the other assets they have, you never know.

La Canfora goes on to mention that the Niners, Panthers and Patriots are other teams likely to be interested. Of those teams, the Eagles have the best possible package to offer with the sixth pick. It appears the Dolphins and Jets are less interested (at least on the surface) than originally expected.

The Eagles planning to make an earth-shattering blockbuster trade for Watson would explain some of their bizarre behavior this offseason and might even get Roseman off the hook for the atrociously handled Wentz debacle. And that has to be something that the Eagles lifer and Jeffrey Lurie consigliere is eager to achieve.

This story is developing and we'll keep you posted if there winds ups being more smoke.